Windows on the world 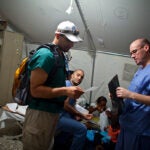 Citizen of the world

In the past 20 years, the Weissman International Internship Program has enabled 576 Harvard College students to work and experience life in 87 countries. This year, 49 students participated in the program, the largest number ever.

On Thursday, representatives of that group joined program alumni, Harvard faculty, staff, and three generations of the Weissman family to honor Paul Weissman ’52 and Harriet Weissman, the program’s namesakes, at a reception at University Hall.

Michelle Wu ’07 was a Weissman intern in 2006. She took a break from her campaign for Boston city councilor-at-large to give thanks to the program. “I interned at a Shanghai law firm,” she said. “Without that experience, I wouldn’t have gone to law school, and I wouldn’t be running for office.”

Harvard President Drew Faust addressed the reception, heralding the Weissmans’ generosity — not just for the program, but also for Paul Weissman’s fundraising for his College class, which he has spearheaded every year since graduation, and his work at the Harvard Foundation. She also acknowledged the couple’s longtime personal “friendship and support” during her years at Radcliffe, and thanked them for escorting her to her first Harvard-Yale game.

Paul Weissman thanked Faust, saying the program “has given us tremendous pleasure and satisfaction.”

He also thanked Jay Harris, dean of undergraduate education, for his help securing the hall’s faculty room for the reception. “Not everyone gets this room,” he explained, to laughter.

Weissman acknowledged the work of Vice President for Alumni Affairs and Development Tamara Rogers, Sidney Knafel ’52, M.B.A. ’54, and University Distinguished Service Professor Joseph Nye for their help in launching the program in the early ’90s. “It’s been going gangbusters ever since,” he declared, to more laughter.

Harriet Weissman spoke next, in a soft, rolling voice. She playfully chided her husband of 52 years for saying everything she had wanted to say. The program’s participants, she said, “make us feel optimistic about the future.”

“It’s rare for something in academia to be fresh for 20 years,” Harris said, but the Weissman program has remained so despite starting “before today’s undergrads were even born.”

Weissman Program participant Li Murphy ’15 spent this past summer “working with bees, beekeepers, and on world development” in Bishkek, Kyrgyzstan, the first participant to intern there. Murphy said the experience reinforced to her how important bees are to understanding the health of ecosystems around the world. She also brought back plenty of honey.

Mateus Falci ’14 edited and mixed documentary footage for a film company in Porto Alegre, Brazil. The experience, he said, was “less L.A. and more nice people.” The program enabled him to live as Brazilians do, and to work on actual films — something he suspects an American internship wouldn’t have included.

Naimonu James ’14 spent her summer in Malaysia, working at a fine arts gallery. “I came back with a sense of what I want to spend the rest of my life doing, which is to spend it in galleries.”

The three students presented the Weissmans with a silver cup filled with the flags of the 87 countries the students had visited.

The reception, sponsored by the Office of Career Services, was originally slated for last spring, but was rescheduled following the Boston Marathon bombings.