Where students own their education 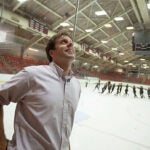 It looked like an episode of the TV show “Hoarders” outside the Connaughton Room in Pierce Hall last year. Stowed in lockers were a box of eggs, a Clapper, a bottle of rubbing alcohol, a set of dominoes, PVC pipes, a glass jar, pulleys, and a plastic racetrack — the raw materials for students’ design projects in Applied Physics 50 (AP 50), “Physics as a Foundation for Science and Engineering.”

“We would throw out crazy ideas like mousetraps or Newton’s cradles or catapults,” recalled Ryan Alden ’14, a chemistry concentrator, “and the next day we’d have a bunch of mousetraps to play around with.”

Grounded in a teaching philosophy that banishes lectures and encourages hands-on exploration, the course represents a collection of best practices gleaned from decades of teaching experience and studious visits to college physics classrooms nationwide. Considered the “applied” sibling to the “analytic, numerical, and experimental” Physical Sciences 12 sequence, AP 50 is being offered for the second time this year at the Harvard School of Engineering and Applied Sciences (SEAS), open to undergraduates from all concentrations.

“The environment we created in AP 50 is really conducive to students taking ownership of their own learning and authentically assessing their own skills,” said Eric Mazur, Balkanski Professor of Physics and Applied Physics, who co-teaches the course with Carolann Koleci, preceptor in applied physics. “It’s about helping students apply what they’re learning within a real-world context.”

Soundbytes: You can't learn physics without breaking a few eggs

A hands-on approach to teaching and learning in AP 50 helps Harvard undergraduates learn the foundational concepts in physics by applying them to real-world situations. “I’ve never taken a class like this before,” says Bernadette Lin ’16, “but I really love it.”

“Each project is sort of like a Trojan horse,” said Mazur. “I don’t tell them, ‘You should learn kinematics or momentum,’ no. The project requires them to learn kinematics and momentum; otherwise they can’t do it.”

By several measures, the approach is paying off. The attendance rate was 97 percent last year. Last fall, AP 50 showed the largest gain on the force concept inventory, a measurement of students’ understanding of basic concepts, of any Harvard physics course in the last six years.

“This course is teaching physics and engineering in a new way,” said SEAS Dean Cherry A. Murray. “But even more importantly, it teaches the skills that leaders in any field need: to work in teams and to solve problems among people with diverse perspectives.”

To foster those skills, Mazur and Koleci issue open-ended challenges that force the students to brainstorm together instead of working silently and independently on paper.

“It was definitely hard trying to get the initial spark going,” said Alden, who took AP 50 last year, “but once a couple of ideas started flying around, someone else in the group might latch onto that idea and change it a little bit, so basically no idea was stupid. And that was maybe the most fun: not only getting something that actually worked in the end, but finding 10 other ways that failed miserably, too.”

Emily Lowe ’14, who studies Earth and planetary sciences and anthropology, was proud of her team’s accomplishment when, after many attempts, their contraption cut a string that released a catapult that launched a rubber ball precisely into a funnel. At last, elastic collisions and projectile motion made sense.

AP 50 is not just about playing with mousetraps and bouncy balls, of course. But even the paper-based assignments are unconventional. In one class, Mazur and Koleci started asking questions about topics that hadn’t been covered: What’s the difference in electrical potential that leads to a lightning strike?

“Yes, of course you could Google that,” explained Mazur, “but the point is to argue it from basic principles.”

Suppose, instead of powering a 100-watt lightbulb for an hour, that energy was used to lift a 130-pound person. How high would he or she go? During the class period, the students work in teams to generate a realistic estimate.

“It gives them a way of honing their qualitative reasoning skills,” Mazur said. “Sometimes what matters most in the real world is that you can accurately judge the relationships between things. We want to make them comfortable with stepping into unknown terrain, and tackling problems where there are no prescribed methods.”

On homework assignments, students are graded according to how well they approach each problem, and how thoughtfully they reflect on any errors afterward. There is no printed textbook. Instead, a free, collaborative, online text lets students annotate their reading on laptops and tablets and engage in online discussions after class.

And there are no exams — at least, none like you’ve seen before. The students answer a few questions individually, using Mazur’s Learning Catalytics system, and then compare their answers within a group, reasoning their way through any disagreements until everyone at the table settles on a single answer.

“Traditional exams stifle creativity,” said Mazur. “Here, there’s no stress. They’re teaching each other, and more importantly they’re having fun. By the time the whole thing is over, you’ll see students talking, laughing, going to the whiteboard. It’s amazing.”

“Applied Physics 50 has presented physics in a fun way, and [it’s] especially really interactive,” said Bernadette Lin ’16, while she perfected her team’s Rube Goldberg machine. “I’ve never taken a class like this before, but I really love it.”