Who needed a stapler? 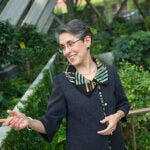 Mazur, King, Lukoff startup goes from nothing to something in 20 months

Enabled by the rise of cloud computing, which frees software companies from running expensive server farms, Learning Catalytics consisted almost entirely of intellectual property. When it was sold to education giant Pearson, the company didn’t even own a stapler.

The Gazette sat down with Mazur recently to talk about the company’s start as an idea, its founding moment during a nerve-wracking presentation before 1,000, and about Mazur and King’s penchant for holding board meetings while mountain biking.

GAZETTE: How did Learning Catalytics get started?

MAZUR: I’ve been interested in student-centered teaching and in finding ways to engage students in the classroom. One of the ways I do that is by polling them with classroom clickers, which have buttons a-b-c-d. A big limitation of the technology is that it relies on multiple-choice questions.

Back in 2002-2003, we saw that instead of clickers we could use consumer devices, though the early applications of consumer devices — iPods, cellphones, laptops — were to use them like you would with a clicker, with a-b-c-d multiple-choice questions.

In 2010, I interviewed a postdoc, Brian Lukoff, for another project. Brian had done his Ph.D. in education technology at Stanford and gave a talk about his thesis. He showed he could code the computer to interpret hand-drawn graphs better than humans could.

I thought, “Wow, that means we could actually have students input hand-drawn graphs in the classroom rather than me drawing a graph and asking them if it was correct.” I asked Brian if he was interested in working on consumer device-based polling and he came to work with us in September 2010.

Brian showed me a prototype in November, after just three months, and I had to decide whether to use it in a large introductory class, physics 11B, in the spring of ’11. I asked Brian if he was OK running a large class on the prototype. I said, “I’ll take the blame if it doesn’t work, but you’ll have to fix it because we’ll have 100 screaming students if something goes wrong.”

When the semester came in February 2011, almost all students had a device. Some brought Kindles, others brought laptops, others brought iPads, others brought smartphones. We started with just a few modalities of questions. Students could draw a function, enter a number, or enter an equation.

GAZETTE: Has the technology changed your teaching?

MAZUR: Totally. I teach a new class with no lectures at all, no examinations at all. Learning Catalytics plays a very big role in that class. Not only as a teaching-by-questioning platform, but also as an assessment platform.

In 30 minutes, students answer 10 to 12 questions on their own. Then I press a button and it goes into team mode. Now it shows boxes across the top of their screens with answers from others at the table. Working as a team, they can only settle on one answer, so they have to negotiate.

GAZETTE: Is what we’re talking about here, behind the bells and whistles, a way of creating — in a large classroom — the kind of interaction you would normally get only in a small classroom?

The standard approach to teaching is very isolating. A big lecture is isolating, and normal exams are completely isolating, too — students are not only isolated from each other, they’re isolated from information. If you ask yourself if you’ve ever encountered a situation like that in your professional career, I’d be really surprised if you said yes.

So it does break up large classes, giving the kind of feeling you get in a smaller class, but it also mimics much more closely the environment in which students will have to work. It develops skills that they need for the course, but also soft skills — communication skills, collaboration skills, team-building skills — that are important in anyone’s career, no matter what they do.

GAZETTE: How did Gary King get involved with the company?

MAZUR: Five years earlier, I founded my first company, SiOnyx. Gary called or emailed that he was starting a company and was interested in talking about how you negotiate a license with Harvard. We talked and then went our separate ways.

Gary’s company, Crimson Hexagon, does data analytics on social media and tries to make sense out of the millions of tweets that are posted each day. So he monitors Twitter, which was was something I had begun playing around with. At about the time Brian and I were working on Learning Catalytics, I wrote about my mountain bike rides in Concord.

So we did, and I asked Gary how his company was doing and what they were doing and he explained that they’re doing data analytics on tweets. I thought, “Wow, you take free text responses and somehow make sense of them?”

That’s another piece of the puzzle, because with that, we could have students type in free response answers and make sense of them. So I started telling him about [Learning Catalytics]. Later, we had our board meetings while mountain biking.

GAZETTE: How did Learning Catalytics go from an idea to a company?

MAZUR: Alan November, a consultant in education who runs a very large conference in the summer, had visited my class. He asked me to give a keynote to 1,000 people at the Boston Park Plaza. I thought this was a good way, given the interest we’d seen, to launch the software.

We incorporated sometime in June 2011, just in time for the conference, and quickly filed a patent in order to have some IP [intellectual property] associated with the company. Gary played an important role there. The three of us brainstormed in my office about things we could patent and filed four provisional patents.

On July 27 at 8 o’clock, I drove out. I was pretty nervous. The talk depended on the success of the software, which I had only tested in my class with a maximum of 90 students. I had also added two new types of questions, one where you had an arrow and another where you had a word cloud. We didn’t even have a chance to test those out in the classroom.

The session started, people were streaming in and Brian was sitting on the side. I gave the talk and it worked flawlessly.

GAZETTE: Were members of the audience using the software during the demonstration?

MAZUR: We got something like 600 of the thousand using the system. I had a map of Boston and they had to indicate with an arrow the direction to the Custom Tower. We saw a map of the ballroom with a fan of arrows because people’s sense of direction was pretty limited. There was a pretty big wow factor.

By the end of that talk, we had our first customers. Brian quickly set up an e-commerce system.

Then the University of Texas at Austin sent their vice provost to observe my class because they were doing a complete redesign of their gateway courses and he said he wanted the faculty of UT Austin to use it in a number of courses. The next big client was Northeastern University. Then it snowballed.

Within a year we had 10,000 users without a penny invested. I think Gary and I each put in $500 to pay the lawyer for the incorporation. We didn’t even own a stapler.

GAZETTE: Why did you decide to sell the company?

MAZUR: The question was how to reach more customers. How to go from 10,000 to millions? We could take on venture capital and hire a marketing and sales staff, but that would change the whole nature of the enterprise. You cannot stay in the cloud, you have to raise money and so on. At the same time, several companies were interested, one of which was Pearson. That was in November or December of 2012 and it basically took three months negotiating. All of a sudden, overnight, Gary and I went from owners to customers, a very strange feeling.

GAZETTE: So what comes next?

MAZUR: Well, Gary and I form a really good team and we have another idea. Our next board meeting is Saturday.