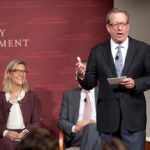 Moderator Graham Allison went straight to the heart of the matter during an Institute of Politics forum on Syria at the Kennedy School (HKS) Wednesday, asking the four panelists for a yes or no vote on military force.

Marisa Porges, an International Security Program Fellow at the Belfer Center for Science and International Affairs, said a targeted strike would be neither timely nor proportionate.

“If we’re really looking to do something, we need to look toward humanitarian aid to Jordan, Lebanon, Iraq, to the internally and externally displaced refugees, and to aggressively push for a diplomatic solution that would make an end to the greater problem, which is not just the 1,400 people killed in this chemical attack but the 100,000 that have died more broadly in the war.”

R. Nicholas Burns, a professor of international relations and a former U.S. diplomat, said the U.S. approach to Syria should include limited air strikes to degrade President Bashar al-Assad’s military capacity. Military action, however, must be followed by diplomacy with Russia, Turkey, and the Middle East states, he said, and by a massive international relief operation for Syrian refugees as well as efforts to engineer a ceasefire.

Offering a sharply different perspective on the Obama administration’s handling of the situation, Harvard historian Niall Ferguson drew a portrait of a president irreparably damaged by a lack of a Middle East strategy. While Ferguson said he would have voted yes as a member of Congress, it didn’t surprise him that so few people have been willing to step up and support the president.

“The United States should have intervened earlier and I think our aim should have been regime change,” said Ferguson. “Now, it is much too late and the consequences of this dithering are already deeply tragic not just for Syria, but for the people in all these neighboring countries that have been deeply destabilized by this.”

Former HKS dean Joseph S. Nye said he supports a limited strike, but that the U.S. should not be involved in regime change. “The Arab countries are going through a set of revolutions which are theirs and the more we interfere with it, the worse we’re going to make it.” The question now, said Nye, is “can we make lemonade out of this lemon.”

With Putin’s proposal on the table, Nye said, Obama should invoke Chapter 6 of the U.N. Charter in requiring the Syrian president to give up his weapons. The objectives, Nye said, should be to limit those weapons and deter their use. “Obama should play his hand in such a way that doesn’t allow somebody to restrain him, whether it’s the U.N. or the Congress.”

Nye also noted the contrast in U.S. public opinion to military intervention in the Middle East from just a little over a decade ago.  “What a remarkable shift,” he said. “Today Obama is being pulled back.”

When the discussion was over, Allison, a professor of government and the director of the Belfer Center, asked the audience to vote on intervention. Using clickers handed out at the beginning of the event, 55 percent voted no, 45 percent yes.

The event was co-sponsored by the Middle East Initiative and the Belfer Center. To view a video of the event, visit the IOP website.