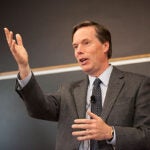 In elections following the 2011 uprising that toppled longtime dictator Hosni Mubarak, Egypt’s Muslim Brotherhood captured the president’s office and a parliamentary majority. While those victories were bad news for Egyptian liberals and the remnants of the former regime, alone they weren’t enough to prompt this summer’s military action, according to Tarek Masoud, associate professor of public policy.

Instead, Masoud said, it was the prospect of continued electoral dominance by Brotherhood candidates at all levels that led to the move.

“The Muslim Brotherhood was just too good at winning elections,” Masoud said. “If the liberals actually thought they could win an election, they would have channeled [public dissatisfaction] into the next election. … The opposition was not confident it could beat the Brotherhood in an election, so it needed the military.”

In July, after massive anti-government protests, the Egyptian military suspended the constitution and removed President Mohamed Morsi from office, sending Brotherhood leaders into hiding and the group’s supporters into the streets in protest. More than 1,000 have been killed.

On Sept. 5, a conference room and nearby hallways at the Center for Middle Eastern Studies were packed for a discussion that in addition to Masoud included E. Roger Owen, the A.J. Meyer Professor of Middle East History Emeritus, and grad student Sarah Moawad, who recently returned to campus after spending several weeks in Egypt.

Moawad shared observations of the anti-government protests in Cairo and Alexandria and said dissatisfaction with Morsi’s government had been widespread in the weeks before he was removed from office, with long gas lines, irregular electricity supplies, falling tourist dollars, and overall economic decline key factors. In addition, the predominately Muslim Egyptian people were tired of the Brotherhood telling them how to be Muslim, Moawad said.

People she spoke with were upset at the characterizations, mostly in the Western press, of the military takeover as a coup, as they preferred to think of it as an action supported by signatures from some 22 million voicing a withdrawal of confidence in the Muslim Brotherhood government.

“The Muslim Brotherhood was remarkably effective at alienating the people who were willing to give them a chance,” Moawad said.

The military was never removed from its lofty position atop Egyptian society, Masoud said, despite claims to the contrary. The Brotherhood, in fact, went to great lengths to assure the military that they weren’t at odds, he said.

Those who view the takeover as a response to the imposition of religious government on what had been a secular state are missing how conservative most of Egyptian society is on religious matters, Masoud said. For most Egyptians, the religious aspects of Brotherhood rule were not a big problem. He also disagreed with those who saw it as an expression of dissatisfaction over very real economic difficulties.

The Brotherhood’s role in Egyptian politics is at an end, since the military is vigorously pursuing the group’s members, Masoud predicted. That doesn’t mean, however, that there is no role for an Islamist party in the country’s future, he said.

“I do think political Islam has to be accommodated and allowed to participate in Egypt’s future,” Masoud said.

Participants expressed uncertainty over what that future might hold. Though some may be tempted to think that recent events represent a return to the authoritarian governments of the past, Owen rejected that view. Instead, he said, what we’re seeing is another stage in ongoing changes that began with the Arab Spring of two years ago.

“This process is not over, by any means.”