The whys of rising obesity 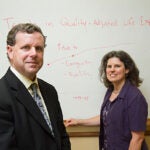 Harvard nutrition expert Walter Willett compared the marketing of junk food to kids with an earlier era’s child labor practices, saying that young people have been “exploited” by both systems. He said such food marketing is an important factor in America’s obesity epidemic.

“Children are being exploited, same as sweatshops,” Willett said. “This is a natural consequence of a capitalist food supply.”

Willett, speaking today at a Forum at Harvard School of Public Health (HSPH), said that much of the blame for the obesity epidemic should go to food industry researchers who have done their jobs all too well. Under pressure from the ever-competitive food industry, the researchers perfected not just the preferred tastes of prepared foods, but also their packaging and advertising.

Marketing strategies aimed at children influence a population this is not only vulnerable to such messages, but is also establishing long-lasting dietary habits.

Panelists on the forum webcast included Willett, who chairs the HSPH’s Nutrition Department; Michael Rich, an associate professor at HSPH and Harvard Medical School (HMS) and director of the Center on Media and Child Health at Harvard-affiliated Children’s Hospital Boston; Dariush Mozaffarian, associate professor of epidemiology at HSPH and associate professor of medicine; and former Food and Drug Administration Commissioner David Kessler, now a professor at the University of California at San Francisco. The hour-long panel, called “Why We Overeat: The Toxic Food Environment and Obesity,” took place before a small studio audience in the Kresge Building and drew Internet viewers from as far away as Australia.

The discussion cast a strong light on America’s children, 17 percent of whom are obese and 5 percent of whom are in a new category called “severely obese,” according to panel moderator Meredith Melnick of the Huffington Post, which co-sponsored the event.

While food industry marketing plays an important role in the obesity epidemic, panelists described several other important factors that are increasingly causing experts to view the epidemic not as a collective failure of personal willpower but as the offshoot of an unhealthy food environment. Among the concerns are changing eating habits, where people no longer eat just at mealtimes, and the tendency to eat while watching television.

Television is a factor in the fattening of America, the panelists said, displaying what public health officials call a “dose-response” relationship with obesity — meaning the more television we watch, the fatter we get. The amount of time children spend interacting with screens on televisions, computers, cellphones, and other devices has risen dramatically, Rich said, to more than seven hours a day. But it is television time — with focused attention, exposure to advertising, and “mindless eating” — that has proven a key obesity factor, Rich said.

Although sedentary lifestyles often share part of the blame for the epidemic, Mozaffarian said that is largely unwarranted. People today, he said, are no less active than they were in the 1970s, before the epidemic began to take hold. Rather, he said, the blame lies squarely on changes to the American diet since the early 1980s.

In that time, portion sizes have increased, and consumption of sugary drinks has soared. One important factor in the changes, he said, was well-intended. The anti-fat messages of the ’80s drove many people concerned about their health to avoid fat in foods, and instead to increase their carbohydrate intake. The problem, Mozaffarian said, was that much of those carbohydrates were in the form of highly processed starches that in the body behave in much the same way as sugar.

Willett and Mozaffarian rejected the idea that genetics plays a role in the epidemic. Though some experts have pointed to the body’s ability to hold onto calories as an ancient defense against famine, the two pointed out that the current crisis is a new development, one largely not suffered in our grandparents and great-grandparents’ time, when obesity rates were a third what they are today. Genes, they said, don’t change that quickly.

Panelists disagreed about the significance of America’s high-sugar diet, with Kessler saying that sugar combines with too much salt and fat in irresistible products that amount to a food “carnival.” Mozaffarian, however, said the focus on any particular component of food can be misleading. Instead, he said, people should focus on eating whole foods like fruits, vegetables, nuts, and grains.

“It’s really the kinds of food that’s important,” Mozaffarain said. “We focus a lot on what not to eat; we need to focus on what’s good to eat.”

Willett suggested something akin to the Mediterranean diet, which Mozaffarian pointed out has more fat in it than the typical American diet. Without some sort of regulation to force a change, however, Willett was pessimistic that a solution is near.

“If we have no restraints, the problem isn’t going away. It’s only going to get worse,” Willett said.