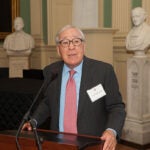 “We cannot bring back from the grave the policy of picking winners that European countries embraced,” Joaquín Almunia, European Commission vice president and commissioner for competition, said Thursday during a Harvard talk. “I have to reject these calls for relaxed enforcement of competition policies. This does not mean Europe does not need an industrial policy. The question is what kind of industrial policy. We embrace a modern industrial policy and reject the old-style policy from the 1970s.”

Almunia was at the Minda de Gunzburg Center for European Studies as part of the center’s Director’s Seminar series. He was introduced by Grzegorz Ekiert, the center’s director and a professor of government.

Almunia, who completed the Senior Managers in Government program at Harvard Kennedy School in 1991, called for increased economic cooperation with the United States through the Transatlantic Trade and Investment Partnership, which would reduce tariffs, smooth regulatory hurdles, and coordinate standards and certifications to ease trade between the U.S. and the EU. The first negotiation occurred in July in Washington, D.C.; a second round is planned for October in Brussels.

During a question-and-answer session after Almunia’s speech, Ekiert said that many observers are pessimistic that such an agreement can be reached. The EU has a record of overcoming difficult hurdles, Almunia answered, from its very inception to its handling of the recent sovereign debt crisis, which required the creation of institutions before any action could be taken to quell the crisis.

“The day after Lehman Brothers went bust, Europe was not prepared to deal with the crisis. We didn’t have the tools,” Almunia said. He added that, “I am optimistic” about the trade negotiations.

The European Commission is the European Union’s executive body, headed by President José Manuel Barroso and responsible for the EU’s day-to-day operations.  It has one member from each of the EU’s 28 countries. Almunia has been on the commission since 2004.

If the U.S. and the EU can come to a new trade agreement, Almunia said, it would signal to the rest of the world that economic cooperation and open economies are the way to go, fostering increasingly open trade around the globe that would help Western businesses.

Within the EU, it’s important to create as level a playing field as possible, so that European companies can compete with one another, he said. Two ways the EU seeks to do that is through antitrust actions against cartels and by reviewing public subsidies to specific industries.