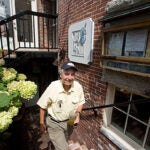 The much-anticipated renewal of the Harvard Art Museums is nearing completion, and last week officials offered a sneak peek at the massive project’s progress.

Wearing hardhats, protective gloves, safety goggles, and bright yellow vests, a small entourage led by museum director Thomas W. Lentz wove its way through the beams and boards of the construction site that is steadily morphing from a dark hole in the ground and a hollowed structural shell to a teaching and learning museum for the 21st century.

“What has driven this entire project is our mission,” Lentz said, is “innovative teaching and learning,” developing new experiences in that field for students, faculty, and the community.

When it opens next year, the new 205,000-square-foot building, which unites the Fogg Museum, the Busch-Reisinger Museum, and the Arthur M. Sackler Museum under a spectacular glass roof, will include two entrances, five floors above ground and three floors below, a café, a museum store, an expanded art study center, a 300-seat theater, lecture halls, and teaching galleries.

Function and form hold equal place in the ingenious design by Pritzker Prize-winning Italian architect Renzo Piano, who is known for works that include the sky-piercing, glass-covered tower called the Shard in London and the San Nicola Football Stadium in Bari, Italy, which blooms from the landscape like an enormous concrete flower.

But one function was particularly vital to the Harvard project. For art lovers and worried experts alike, the main drawback to the original Fogg was its lack of climate controls. “Our internal joke,” said Lenz as he stood at the bottom of the steps of the 1927 Fogg’s original Quincy Street entrance, “was we would never lend to ourselves.” Now, he said, the climate-regulated galleries will be “what a collection of our stature really deserves.”

For Lentz, the Elizabeth and John Moors Cabot Director of the Harvard Art Museums, the collection also deserves the chance to be seen — and engaged with — in innovative ways. Spatial constraints in the old facility meant only a fraction of the museum’s expansive collection could be exhibited. When the renovated and expanded facility opens next year, visitors will have 40 percent more gallery space to explore. And viewers will be able engage with that material in new ways.

Standing in a smaller gallery on the dusty third floor, still empty and smelling of paint, Lentz explained that the new museum will not offer narrowly dedicated galleries for paper, photography, prints, or drawings. Instead of consigning such materials to a “paper ghetto,” these media will be displayed side-by-side with paintings, sculptures, and decorative arts, offering visitors a more “contextual presentation.”

The museum also will mingle works provocatively. For instance, American works of art will stand alongside European and Native American material. “In many ways, that’s a reflection of how American art history is now taught,” said Lentz. “In our view, that’s going to make for a more compelling presentation. We expect to see lots of interesting juxtapositions.”

The galleries will remain small in scale, “human and intimate,” said Lentz, to encourage viewers to slow down, look, and truly connect with artworks. That intimate engagement will be strongly encouraged on the fourth floor.

One level below the museum’s Straus Center for Conservation and Technical Studies is the art study center, where visitors can request up-close viewings of works of art. The center’s layout includes three study rooms, one each for the Fogg, Busch-Reisinger, and Sackler museums, as well as two seminar rooms that can accommodate smaller groups of students.

“The power, we believe, of an art study center,” said Lentz, “is it’s essentially art on demand. What you can have in here is an experience that is fundamentally different from walking through the galleries, sitting in a classroom, or looking at slides or PowerPoints.”

There will be teaching galleries on the third level, including one that will function as a curatorial laboratory where students can study the art of installation and how to craft an “argument” by using works of art.

Capping the building’s fifth floor is Piano’s glass lantern, a shining, slanted rooftop fitted with a complex series of mechanical shades that allow museum workers to control carefully the amount of light that flows into the space. The giant skylight disperses light through the conservation lab, study center and what now will be the central circulation corridor of the building, diffusing sunshine into the galleries and arcades and the beloved old courtyard below, and creating what Piano calls the “Light Machine.”

According to Lentz, that courtyard, modeled after a 16th-century façade in Montepulciano, Italy, is now truly the emotional and symbolic heart of the museum. Previously, the space, which was only open on three sides, was “gloomy and static,” Lentz recalled. Thanks to Piano and his architectural team, the courtyard has been pushed open on all four sides and now includes 16 points of entry, along with a bluestone floor.

The ground floor also serves as a pedestrian thoroughfare. The public will be able to stroll from the Quincy Street entrance through to a new, expanded entrance on Prescott Street, taking advantage of the café and store without paying admission. “We wanted to make it much more transparent, much more accessible,” said Lentz.

Various flourishes contribute to the museum’s visual delights. For example, the new wing’s wooden façade, when seen up-close, surprises a viewer with its grain of rippled waves. The undulating clapboard made of Alaska yellow cedar will weather over time to a light gray hue. Another welcome and unusual detail can be seen in the museum’s winter gardens: small niches on the second floor of the new wing that will serve as intimate glass sunrooms populated with art that is not sensitive to light.

Throughout the building, a vertical glass window becomes a transparent seam allowing visitors to see where the old Fogg structure and the new wing merge. Glass-tipped galleries at either end of the first floor facing Prescott Street will allow passersby to peek inside. “The porosity of this building,” said Lentz, “is radically different.”

Ever-conscious of the building’s famous neighbor, the Carpenter Center for the Visual Arts at Harvard, the only North American structure by the renowned modernist architect Le Corbusier, Piano has extended that structure’s graceful curving concrete ramp along the edge of the museum, bringing it under the cantilever of the new wing down to Broadway. Charles Klee, the principal at the architectural firm Payette, which is collaborating on the project, said Piano likes to say, “It’s a little bit like Le Corbusier putting his arm around the Fogg.”

“A lot of people, when we began this, thought that we were just sort of rebuilding a very beautiful, static treasure house,” said Lenz. “My message is this is going to be a very different kind of art museum … I think the experience for viewers is going to be much more dynamic and much more integrated.”