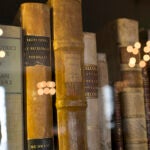 Faust describes challenges of a new era in higher education

Harvard begins its 377th year amid “seismic shifts” in U.S. higher education that present both formidable challenges and unprecedented opportunities, President Drew Faust said in an address to the University community on Tuesday.

“American higher education is undergoing seismic shifts, and we face extraordinary pressures,” Faust said in her opening-of-year speech at Sanders Theatre. “And Harvard is not immune.”

But Faust added that Harvard has always been a place of possibilities, where students can listen to great artists talk about their work, “unlock the promise of stem cells or the meaning of a verse,” and “meet — and become — entrepreneurs.”

“It is a place where people think and act, and imagine and realize,” Faust said. “It’s what all of you do, and all you can do, that fills me with optimism about Harvard’s future.”

The Harvard Campaign — to officially kick off later this month — is a major effort to meet the resource challenge, Faust said. She cautioned, however, against viewing the campaign as a panacea, saying it will not by itself meet all of Harvard’s challenges, which will require creativity and innovation to put available resources to good use.

“Harvard and higher education face larger, longer-term pressures, and we must not think of the campaign as our only response,” Faust said. “To ignore the forces of change or to hope or trust they will just go away, to imagine that Harvard is somehow exempt from the pressures facing others would be to surrender our power to shape our destiny.”

Faust made her comments before an audience of faculty, staff, and students that filled Sanders’ 1,100 seats. A week ago, she welcomed 1,665 freshmen in Harvard College’s incoming class to a graduate and undergraduate student body that this academic year covers 110 countries and the 50 states.

After her remarks, Faust fielded questions from the audience and from Herman “Dutch” Leonard, George F. Baker Professor Jr. of Public Management at the Harvard Kennedy School and Eliot I. Snider and Family Professor of Business Administration at Harvard Business School. The questions touched on everything from University finances to Faust’s management style to her own academic career.

After the talk, much of the audience moved to a reception on the Science Center Plaza, newly renovated as part of Harvard’s push to create common spaces where people can meet and interact. The event, inside a ring of food trucks, featured performances by a dozen student groups as the aroma of free food floated in the air.

The larger question Faust posed during her talk was how to maintain a “community not quite like any other on the planet,” amid a new era’s challenges and increasing financial constraints.

She quoted Moody’s Investor Service’s negative outlook for the higher education sector as a whole — which explicitly included leading universities — in describing the financial strains that are touching campuses across the country.

The financial picture at Harvard reflects those broader concerns, Faust said. After several years of break-even budgets, University leaders anticipate a budget deficit this year — and Harvard’s $31 billion endowment can’t come to the rescue. Faust explained that much of the endowment’s funds have been dedicated by donors to specific purposes, such as backing a named chair, and are not available to meet sudden shortfalls in other areas. In addition, the endowment is intended to stabilize University resources far into the future, so only a small portion of the total — roughly 5 percent — is available in any given year.

Federal budget problems are also felt on campus, as the sequester put a squeeze on federal research dollars, which make up 16 percent of the University’s budget. Until the issue is resolved, Faust said, Harvard stands to lose $40 million annually from that source alone.

Harvard’s commitment to ensuring qualified students can attend regardless of their financial circumstances has meant a significant commitment to financial aid, which has caused net tuition, in constant dollars, to be flat over the last decade.

And across the higher education sector, there is little room for tuition increases to make up for the factors squeezing budgets. With families straining to pay college costs and students shouldering ever-higher debt loads, lawmakers, students, and parents have been critical of ever-rising tuition bills and question the value of a college education with respect to future job prospects.

Despite the difficult financial times, the challenges hold opportunities. To meet student interest, schools are creating new programs, such as the undergraduate concentrations in electrical engineering and mechanical engineering.

At Harvard and elsewhere, research, teaching, and learning are more and more happening in a global context. The galloping pace of technological advance, meanwhile, has created opportunities for online education. Harvard has embraced those with the creation of HarvardX and, in partnership with other universities, of edX.

The big problems facing the world today — from climate change to global health to urbanization — are complex and sweeping. They require faculty members to cross not just national boundaries but disciplinary boundaries, and to have the resources to support their efforts, Faust said.

“The mathematician and philosopher Alfred North Whitehead once said that, ‘The art of progress is to preserve order amid change and to preserve change amid order.’ That is our task,” Faust said. “We do not face a choice between tradition and change, between the familiar and the new. We face an opportunity and an imperative both to embrace thoughtful change and to affirm our core values in ways that fulfill this extraordinary university’s enduring promise to its students and to the world.”