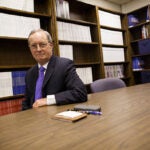 When bacteria fight back

In 2010, Kenya approved a new constitution that guaranteed citizens the right to health care and basic necessities: housing, food, and water.

Catherine Mumma, a Kenyan attorney working for that country’s Commission for the Implementation of the Constitution, was at the Harvard School of Public Health (HSPH) last week to see what she could learn about the intersection of health, law, and national constitutions during a weeklong program focused on health rights and the law.

“My interest is to learn from the experiences of other countries, how to get implementation of social and economic rights,” Mumma said.

Mumma was participating in the Global School on Socioeconomic Rights’ course on health rights litigation, organized by Alicia Ely Yamin, a lecturer on global health and director of the Program on the Health Rights of Women and Children at HSPH’s François-Xavier Bagnoud Center for Health and Human Rights.

The program ran 4½ days. Topics included the use of litigation to promote health equity; the legitimacy, impact, and effectiveness of judicial enforcement of health rights; controversial cases such as one dealing with abortion law in Colombia; and litigating rights beyond health care, such as the right to food, water, and freedom from pollution.

The course, Yamin said, met a need for instruction, training, and deeper reflection about the litigation of health rights, with a surge of cases around the world in recent years. Those cases, in turn, stemmed from the passage of constitutions guaranteeing citizens a right to health; from reformed legal structures; and from changes to previously blocked political channels.

“Many people in public health are not aware of the astounding surge of litigation around the world,” Yamin said. “In many countries where these issues are institutionalized as rights, the courts are far more active” than in the United States.

It examined “how … these abstract principles of human rights, health rights, get implemented in practice to change people’s lives,” Yamin said. “We talk about how setting health priorities and determining health policy are not merely technical issues, they involve profound moral and contested claims. … Courts can, under the right circumstances, play an educative function that advances public deliberation about what our values and priorities are.”

The program also aimed to connect people working on similar issues in different countries, creating a global community as a resource upon which participants can draw.

Instructor Manuel José Cepeda, a former judge of Colombia’s Constitutional Court, spoke about the controversial 2006 case that allowed therapeutic abortions for women in a country that had previously had an absolute ban. The case went the way it did, Cepeda said, because the argument was based on a woman’s right to dignity, which is in the constitution. The decision was heavily criticized by the Catholic Church, which took the extreme step of excommunicating the five justices who voted for it, Cepeda said.

Cepeda said it’s important for those seeking legal redress to pursue avenues of argument that provide a broad basis for consensus on what are often controversial issues.

The Colombia abortion case, he said, was reconsidered by the same court after one of the justices who voted in favor had been replaced by a more conservative justice. Instead of overturning it, however, the court unanimously affirmed the decision — because, Cepeda said, though they disagreed with the judgment, all the justices thought that the process through which it was achieved was a reasonable one.

“The grounds of the decision were reasonable under the constitution, even for those who disagree,” Cepeda said. “Every justice can say, ‘OK, every human being has rights.’”

Several participants said they hoped to apply what they learned when they return home. Salima Namusobya, who works with the Initiative for Social and Economic Rights in Uganda, said she’s learning not just what goes on in other countries but, in some cases, how far Uganda has to go. After a talk on lesbian, gay and transgender rights, Namusobya said that her country has to start further back, as homosexuality is still criminalized there.

Ebenezer Durojaye, an attorney with a nonprofit in South Africa, said he came to learn more about securing social and economic rights for people. Those rights, he said, are guaranteed in the South African Constitution. An important question, however, is how to mobilize people, because if they don’t pursue their rights, there can be no case.