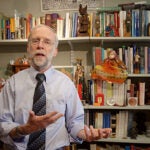 Recent HSPH graduate a victim of terrorist attack on mall

A recent Harvard School of Public Health (HSPH) graduate visiting Kenya to deliver her first child was among more than 60 people killed by Somali militants in the weekend attack on a shopping mall in Nairobi.

Elif Yavuz, 33, a Dutch national described as “unique” and “hilariously funny” by an HSPH faculty member who worked closely with her, received a doctoral degree last spring. She was killed along with her partner, Australian architect Ross Langdon.

“She was warm. She was very intelligent, hilariously funny, unique, a really unique person,” said Jessica Cohen, assistant professor of global health, who was Yavuz’s thesis adviser and collaborated with Yavuz on projects. “We all feel the loss very strongly because she was so special.”

Cohen learned of Yavuz’s death early Sunday from friends involved with the Clinton Health Access Initiative, where Yavuz worked. Yavuz and Cohen had conducted research with group in the past.

HSPH Dean Julio Frenk issued a statement to the community on the tragedy, saying “Elif committed her life and her career to helping those in need. Her compassion was an inspiration to everyone she touched at HSPH and the broader global community in which she lived and worked. She will be deeply missed by all who knew her.”

Yavuz conducted research on malaria in Uganda, spending much of her third year there. The work, Cohen said, involved supplying bed nets and medication and was aimed at improving malaria-related public policy.

After graduating, Yavuz took a job with the Clinton Health Access Initiative’s applied analytics team in Tanzania’s largest city, Dar es Salaam. She was in Nairobi to deliver her baby, expected in early October, Cohen said.

“We were shocked and terribly saddened to learn of the death of Elif Yavuz in the senseless attacks in Nairobi,” they said in a statement posted on the Clinton Foundation website. “Elif devoted her life to helping others, particularly people in developing countries suffering from malaria and HIV/AIDS. She had originally worked with our Health Access Initiative during her doctoral studies, and we were so pleased that she had recently rejoined us as a senior vaccines researcher based in Tanzania. Elif was brilliant, dedicated, and deeply admired by her colleagues, who will miss her terribly.  On behalf of the entire Clinton Foundation, we send our heartfelt condolences and prayers to Elif’s family and her many friends throughout the world.”

A group of HSPH students and alumni who knew Yavuz issued a separate statement Monday afternoon, saying they were “shocked and devastated” by the loss.

“Elif made life richer for us all,” said the statement by Shahira Ahmed, Emily Harrison, Heather Lanthorn, Corrina Moucheraud, and Pamela Scorza. “Her intelligence, spark, and wit, coupled with her unending hopefulness and enthusiasm, brightened our lives.  She was a friend, laughter therapist, vegetarian cook, yogi, novel reader, wine- and tea-drinking companion, scientist, public health malaria specialist, adventurer, mother-to-be. She remains in our hearts and memories, and we will deeply miss her.”

The Nairobi attack by militants with the Somalia-based Shabab group began Saturday in the upscale Westgate shopping mall in Kenya’s capital. The militants killed civilians and took others hostage before beginning a drawn-out faceoff with Kenyan security forces.

Harvard history professor Caroline Elkins, who has worked extensively in Kenya and who chairs the Harvard Committee on African Studies, spoke of the “senseless” loss to the Harvard community, to families in Kenya, and to families of victims from other nations.

“Al-Shabaab’s cowardly attack at the Westgate Mall in Nairobi has brought tragedy to countless communities in Kenya and indeed across the globe. Here at Harvard, we have lost a member of our own community, and mourn for the senseless loss of so many lives,” Elkins said. “This is a time to remind ourselves not only of Kenya’s resiliency in the face of such terror, but also our own capacity to reach out to those who will need our support and strength in the days and months and indeed years ahead.”