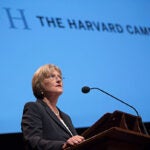 Hundreds of Harvard students, alumni, and staff, along with the Harvard University Band, crossed the Charles River this past weekend to run in the 10th annual Brian J. Honan 5K Road Race.

“Brian was a very special person who cared about his constituents,” said Menino. “He’s remembered by so many young people through the Brian J. Honan Fellowship” — a program that engages youth across Boston, developing leadership skills and stimulating interest in public service — “and I meet with those kids every year. To be here today to support Brian and that next generation of leaders, to give back to the community, is really important.”

Menino, who received an honorary degree at Harvard’s 2013 commencement last May, added that the University’s yearly involvement in the race was vital to the community.

“Harvard participates in so many events,” ranging from “today’s race to after-school programs in local schools,” he said. “It’s just an integral part of the Allston neighborhood.”

For Kevin Honan — brother to Brian, a Boston City Council representative for Allston-Brighton who died in 2002 — the event connects members of the community and honors his brother’s legacy of public service.

“The road race has really brought the neighborhood together,” Honan said. “Allston-Brighton residents and local colleges, especially Harvard. Their participation really helps this race, no doubt about it, and Harvard’s really stepped up to help make this race a success.”

For Christine Heenan, Harvard’s vice president for public affairs and communications, whose department sponsored more than 500 runners, it was a day to celebrate community.  “As a member of the Allston community, Harvard is proud to join our students, faculty, and staff with Allston-Brighton residents and Boston’s leadership for a day of fitness and fun. We love this race.”

Abel Arwaga ’15 of Quincy House said the race was a chance to challenge himself physically and explore the neighborhood.

“This is my first time running in this race, and I’ve never been to this area,” said Arwaga, who’s “working his way up” to running in the Boston Marathon. “I thought Boston was a small town, but it’s so big, and there’s so much more to it than just Cambridge and downtown. It’s great to see it and be a part of it. I’ll definitely be back next year.”

Craig Rodgers, a counselor at Harvard’s Bureau of Study Counsel, ran the 5K for the seventh time. A leader with Harvard On the Move, he took a team of almost 70 runners on a pre-race run from Weld Boathouse to the Honan race site.

“It’s a huge bonding experience for the entire Harvard community,” Rodgers said. “It’s an opportunity for students, staff, and faculty who normally don’t hang out together to get to know each other doing something completely nonacademic, which is why you see so many smiling faces.”

Harvard Ph.D. candidate Bo Waggoner was among them.  He emerged the winner, with a race time of 14:58.  And at least half the top 10 finishers were affiliated with Harvard.

For Jacques Goupil, the race is a family tradition. Goupil, who lives in the Oak Square neighborhood in Brighton, ran while pushing a stroller holding his sons Sebastian, age 5, and Jonah, 3. His wife, Nicole, also ran, pushing their youngest child in a stroller.

“We met Kevin Honan a while back, and we love the community,” said Goupil, adding that he was also there to support the Oak Square YMCA’s Oaktoberfest 5K.

Ally Freedy ’14, student manager of the Harvard University Band, was delighted that the band was able to perform at the race, as well as marching in the 30th annual Allston-Brighton Day Parade that immediately followed. A busy football season schedule had prevented the band from playing at the race until this year.

“We really wanted to try and make this happen,” Freedy said. “We love participating in community events. We lead the parade for Duckling Day in Boston and play Christmas caroling around the city, so we’re really happy to be here. It was a good time.”

Mitchell Dong ’75, who divides his time between Harvard Square and New York City, came to town for The Harvard Campaign launch and decided to join the race as well.

“Brian Honan was a great councilor,” he said. “This race is a great opportunity to meet people, hang out with friends, and run. Coming out to local neighborhoods really connects with the community. It’s a beautiful day, and a great event.”