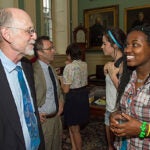 Dialogue with the deans

Harvard University publicly kicked off a $6.5 billion fundraising campaign today, an effort that, if successful, would be the largest ever in higher education.

The priorities that the campaign supports would result in a changed institution, one with a thriving Allston campus, a dramatically expanded School of Engineering and Applied Sciences, modernized student housing, a strengthened global presence, increased financial aid, and an arts and sciences faculty that has more resources to craft innovative educational experiences and to reach across disciplines for fresh insights on difficult issues.

Harvard today emerged from what fundraisers call the campaign’s “quiet phase,” during which the institution raises a portion of the total before the public launch. Harvard already has raised about $2.8 billion in gifts and pledges, leaving a target of about $3.7 billion.

The public kickoff included a series of events on campus, including a speech by Harvard President Drew Faust at Sanders Theatre; a question-and-answer session with Bill Gates, who left Harvard before graduating to found Microsoft Corp.; and a faculty panel at the Memorial Church on the new frontiers of knowledge.

“We launch The Harvard Campaign at a moment when higher education is being challenged to reinvent itself, and we embrace this opportunity for a campaign that aims to do more than merely extend or reinforce long-standing strength and eminence,” Faust said. “The Harvard Campaign calls on us to articulate and affirm the fundamental values and purposes of higher education in a world transformed by globalization and technology, a world filled with promise for improving human lives, a world in which talent recognizes no boundaries, and in which creativity and curiosity will fuel the future.”

Harvard’s last campaign, which concluded in 1999, raised $2.6 billion. In the years since, the University has been buffeted by the same financial storms that many others endured during the global financial meltdown. Harvard saw its endowment lose billions of dollars during the crisis, causing operating budgets to sink hundreds of millions into the red and forcing the rethinking of earlier University expansion plans in Allston.

The University’s endowment stood at $30.7 billion last year, but Faust cautioned recently against thinking of the endowment as a “checking account” that can be drawn down at will. The endowment is a linked pool of thousands of funds, most of them dedicated to specific purposes — such as named chairs or individual institutes or programs — that must be managed into perpetuity, a feature that limits the funds that can be withdrawn in any given year to about 5 percent.

The Harvard Campaign is taking place amid “seismic shifts” in the global higher education landscape, said Faust, who described both the opportunities and the challenges facing the University during a Sept. 10 speech that opened the academic year.

The campaign announcement comes at another time of financial uncertainty for higher education. Federal budget dollars, which fund a large portion of University research, are drying up, even as government officials and parents alike are casting a wary eye at rising tuition bills, leaving little room for higher education to make up lost dollars through tuition increases.

Meanwhile, on the other side of the ledger, changes to the global higher education landscape are exerting pressure on universities to spend more. The advent of online learning, for example, prompted Harvard to join with the Massachusetts Institute of Technology (MIT) to launch edX, which offers online versions of classes at the two institutions and others for free to students around the world.

The Harvard Campaign is organized around several main themes, including interdisciplinary knowledge, teaching and learning, human capital, financial aid, global reach, innovation of all kinds, liberal arts and the humanities, basic research, and the physical spaces where all those things play out.

“The impatient future we face together summons us to reimagine how we teach and learn,” Faust said in her remarks Saturday.

Officials say that, broadly speaking, 45 percent of the fundraising proceeds will go to research, faculty needs, and teaching and learning; 25 percent will go to financial aid and the student experience; 20 percent to buildings and capital projects; and 10 percent in flexible funding to foster new initiatives and faculty collaboration.

Specific priorities mentioned by University officials include development of Harvard’s Allston campus; expansion of the seven-year-old School of Engineering and Applied Sciences, whose classes are in high demand by students; renovation of the undergraduate Houses; and growth in innovative teaching and learning, as well as Harvard’s role in edX; support for the arts and the humanities; and basic research into energy, the environment, neuroscience, and stem cells.

“The Harvard Campaign is critical to the University’s ability to fund important priorities going forward, but it is also an opportunity to redefine Harvard and higher education more broadly,” said James Rothenberg, Harvard’s treasurer, co-chair of the campaign, and member of the Harvard Corporation. “This is an exciting time for Harvard, and we are committed to ensuring that the University will continue to have a meaningful impact well beyond Cambridge.”

Before Faust spoke, campaign co-chair David Rubenstein, founder of the Carlyle Group investment firm, conducted a revealing and often humorous interview with Microsoft founder Gates, who, among other things, admitted that the awkward and once-ubiquitous three-key combination to restart a computer — control-alt-delete — was a mistake. He also said that, in hindsight, he probably didn’t have to drop out of Harvard after three years, since the opportunities in the software industry would have still been there if he had stayed and graduated.

“Though we thought we had to do it that day, a year wouldn’t have made a difference,” Gates said.

In response to Rubenstein’s questions, Gates offered a far-reaching view of his life, from his early days as a Harvard applied-math concentrator to his no-weekends-no-vacations-no-nonsense early years at Microsoft to his post-Microsoft years heading the Bill & Melinda Gates Foundation.

Gates also talked about his early business dealings with Apple, his friendship with Berkshire Hathaway chairman and CEO Warren Buffett, his bridge-playing habit — which he shares with Buffett — and how Buffett came to give billions to the Gates Foundation.

Perhaps not surprisingly, the man who played a major role in the computer revolution, transforming how people work, communicate, and play, has equally large aspirations for the Gates Foundation: to improve education in the United States and childhood health around the world, to eradicate polio by 2018, and, if that effort is successful, turn his efforts to battling malaria and measles.

“Many of the problems we work on, it’s amazing how little has been put into it,” Gates said.

The most important currency

In her campaign kickoff speech Saturday in Sanders Theatre, Faust outlined a changing world whose challenges Harvard must meet. The University, she said, can and should lead the coming revolution in teaching and learning. Global problems will bring learning into the field, while technology will bring the world into the classroom and Harvard classrooms to the world.

She painted a picture of a future where scientific inquiry is rapidly increasing, making knowledge the most important currency, and where the resources needed to sustain the work of Harvard researchers will be critical.

Knowledge itself is shifting, Faust said, and problems of yesterday that required students and researchers to dive deeply into a single field today require work across disciplines. To meet these challenges, Faust said, the University must maintain its ability to bring the world’s best and brightest to campus as both faculty and students. That means, she said, creating a cosmopolitan campus, designing opportunities for strong research, including teaching and learning abroad, and strengthening Harvard’s bonds far beyond Cambridge and Boston.

An important part of that development, she said, will be providing the physical spaces for important interactions to occur, whether new buildings or common spaces where people can gather, such as the newly renovated Science Center Plaza.

Faust mentioned Gates and other prominent alumni and faculty members as examples of the consistent excellence that has marked Harvard’s history. She also mentioned their works — from poetry to key medical discoveries — as examples of the impact the University can have on society.

She opened and closed her speech by talking about legendary Harvard crew coach Harry Parker, who died earlier this year and who not only led the men’s crew to unprecedented decades of excellence, but also said he thought of himself first as a teacher. Faust quoted one of the many students whose lives were touched by Parker.

“He made people prove themselves to themselves. It’s like he said, ‘This is what you could be. Do you want to be that?’ ” the student recalled.

Faust closed with her own wish for Harvard’s future: “May Harvard be as wise as it is smart, as restless as it is proud, as bold as it is thoughtful, as new as it is old, as good as it is great.”

The frontiers of knowledge

The afternoon events started at the Memorial Church, where a panel of faculty members representing biology, business, medicine, philosophy, and law discussed the importance of both basic and applied research. The panelists spoke of the dramatic changes in their fields during their careers and the importance of training students not just to find new knowledge, but to handle the massive amounts of existing knowledge that technology has made available.

The panelists related how their fields are being transformed by the ready availability of genetic data, by the globalized and vastly more complex business environment, and by the ability to obtain texts electronically that, a generation ago, would have required trips abroad to physical archives to locate.

Panelists discussed the differing roles of businesses and universities in knowledge generation, saying that universities are uniquely suited to create knowledge, while businesses are best able to develop and apply that knowledge. The discussion also touched on the nature of truth — with a humorous nod to comedian Stephen Colbert’s fuzzy truth concept of “truthiness” — on patenting discoveries versus sharing them openly, and on the importance of universities in a rapidly changing world.

“I’m afraid the world is going to get rougher in the next … 25 years and I think one of the things a university can be is a place to step back and say what are the things that matter the most,” Henderson said.