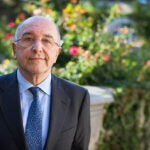 This is the seventh in a series of stories about Harvard’s engagement in Latin America.

SÃO PAULO, Brazil — Tim Linden’s love affair with Brazil began with his attraction to the nation’s most popular passion, something that has seduced millions: jôgo bonito, or the beautiful game.

An avid soccer player as a teen, the Illinois native was at an international soccer tournament in Spain in 2005 when he met a group of Brazilians who were in the competition.

Thanks to his longtime Mexican soccer coach, who taught him Spanish, Linden didn’t hesitate when choosing his first class as a Harvard freshman in 2008, signing up to take Portuguese for Spanish speakers. During college, Linden made several trips to Brazil. Now, his involvement there endures, in tandem with his Harvard ties.

Last month, Linden strolled the streets of São Paulo close to his home, and near the Brazil office of Harvard’s David Rockefeller Center for Latin American Studies (DRCLAS), where he works as an analyst. In an interview, he talked about his involvement with the center and his work with underserved children in Brazil.

Following his freshman year, Linden recalled, he spent the summer in Rio de Janeiro studying Portuguese with a Harvard Summer School program, and his initial attraction was completely confirmed. “I just absolutely fell in love with the Brazilian language, culture, cuisine, people, everything.”

Back at Harvard for his sophomore year, Linden chose to concentrate in Latin American studies, and returned to Brazil the following year to take part in the Rockefeller Center’s Public Policy Immersion Program, working with the Lemann Foundation, a nonprofit that helps enhance the country’s public education system. Linden designed and started an English-language program at a high school, using music and popular culture from the United States as teaching tools.

“That experience was great because it really got me interested in education policy and in understanding the inequalities to access to education in Brazil, which sparked my senior thesis.”

That senior research explored how inequalities in access to foreign-language education have created economic barriers for lower-income families. His thesis also laid the foundation for the work he is doing now in early childhood development, which involves a multi-institutional collaboration among the Rockefeller Center, Harvard’s Center on the Developing Child, the Maria Cecília Souto Vidigal Foundation, Insper, and the University of São Paulo Medical School. Collectively they formed the Núcleo Ciência Pela Infância, the Center for Early Childhood Science.

Linden helped to develop a competitive faculty grants process for Harvard professors who wanted to create collaborative research projects in Brazil on early childhood development. In addition, he has helped to organize Brazil’s scientific and public-sector communities around that field, as well as a roundtable discussion that concluded the 2013 Brazil in the 21st Century Symposium. Jorge Dominguez, Harvard’s vice provost for international affairs, moderated the discussion. The panelists included Jack Shonkoff, the Julius B. Richmond FAMRI Professor of Child Health and Development; Wafaie Fawzi, the Richard Saltonstall Professor of Population Sciences and professor of nutrition; and Gigi Luk, assistant professor of education.

Of course, in the land of jôgo bonito, soccer is still very much a part of Linden’s life. He plays on weekends and is eagerly awaiting the World Cup next summer, when Brazil will host the famous tournament for the first time in more than 60 years. Linden, who captained Harvard’s soccer team his senior year, is also involved in Coaches Across Continents, a nonprofit that uses the sport to address issues such as conflict resolution, health, drug use, and violence.

“We use the ball to teach lessons about how to overcome these issues and make smarter decisions. Hopefully next year, during the World Cup, we will have programs throughout the whole country.”

Linden said that, thanks to Harvard, his passions have converged in a world far from the campus’ iron gates, but that he couldn’t be happier.

“The DRCLAS and particularly its Brazil office really shaped my time and all the opportunities that I had while a college student. The experiences, in turn, shaped my career aspirations, and the different ideas I have about what I can do with my life in the future.”