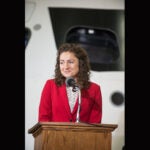 A team of researchers at the Wyss Institute of Biologically Inspired Engineering at Harvard University has found a way to self-assemble complex structures out of gel “bricks” smaller than a grain of salt. The new method could help solve one of the major challenges in tissue engineering: creating injectable components that self-assemble into intricately structured, biocompatible scaffolds at an injury site to help regrow human tissues.

The key to self-assembly was developing the world’s first programmable glue. The glue is made of DNA, and it directs specific bricks of a water-filled gel to adhere only to each other, the scientists report in the Sept. 9 online issue of Nature Communications.

“By using DNA glue to guide gel bricks to self-assemble, we’re creating sophisticated programmable architecture,” said Peng Yin, a core faculty member at the Wyss Institute and senior co-author of the study. Yin is also an assistant professor of systems biology at Harvard Medical School (HMS). This novel self-assembly method worked for gel cubes as tiny as a piece of silt (30 microns diameter) to as large as a grain of sand (1 millimeter diameter), underscoring the method’s versatility.

The programmable DNA glue could also be used with other materials to create a variety of small, self-assembling devices, including lenses and reconfigurable microchips as well as surgical glue that could knit together only the desired tissues, said Ali Khademhosseini, an associate faculty member at the Wyss Institute who is the other senior co-author of the study.

“It could work for anything where you’d want a programmable glue to induce assembly of higher-order structures, with great control over their final architecture — and that’s very exciting,” said Khademhosseini, who is also an associate professor at Harvard-MIT’s Division of Health Sciences and Technology, Brigham and Women’s Hospital, and Harvard Medical School.

To fabricate devices or their component parts, manufacturers often start with a single piece of material, then modify it until it has the desired properties. Other times they employ the practice used by auto manufacturers, making components with the desired properties, then assembling the components to produce the final device. Living organisms fabricate their tissues using a similar strategy, in which different types of cells assemble into functional building blocks that generate the appropriate tissue function. In the liver, for example, the functional building blocks are small tissue units called lobules. In muscle tissue, the functional building blocks are muscle fibers.  Scientists have tried to mimic this manufacturing strategy by developing self-assembling systems to fabricate devices.

Last year Yin, and his team reported in Science that they had developed minuscule DNA bricks, smaller than the tiniest virus, that could self-assemble into complex, nanoscale 3-D structures. He and Khademhosseini sought to create a similar, programmable, self-assembling system for mesoscale components — those with edge widths ranging from 30 microns to 1,000 microns (1 millimeter). They focused first on creating a self-assembly system in which bricks of biocompatible, biodegradable gels called hydrogels assembled into complex structures. In future applications, small hydrogel bricks containing human cells could potentially be injected into the body. The bricks would assemble, then the cells would knit together to form functional tissue as the hydrogels broke down.

In previous attempts to self-assemble hydrogel bricks into complex structures, the bricks often stuck to one another rather than assembling into the desired architecture. Yin and Khademhosseini needed a way to help each component stick only to specific partners, and to no other components. In other words, they needed programmable glue.

DNA was ideal for the task. It stores genetic information as a sequence of four chemical “letters,” or nucleotides, that bind in a specific way to complementary nucleotides (A to T, and C to G). A single strand of DNA adheres tightly to a second strand, but only if the second strand has a sequence of nucleotides that is complementary to the first. And even a short piece of DNA can have a huge number of possible sequences, which makes the glue programmable.

The researchers used enzymes to multiply a snippet of DNA into long pieces called “giant DNA” that contained multiple copies of that snippet. When they coated hydrogel cubes with giant DNA, the cubes adhered only to partner cubes coated with matching giant DNA. Because scientists can synthesize snippets of DNA with any sequence they want, the giant DNA functioned as programmable DNA glue.

To assemble hydrogel cubes into larger structures, they used smaller hydrogel cubes as connectors. They coated the connector cube with their DNA glue, then attached it to one of the six faces of a larger cube.  A large cube outfitted this way adhered only to other large cubes whose connectors had matching DNA glue.

By placing connector cubes on various faces of the larger cubes, they programmed larger cubes to self-assemble into specific shapes, including a matching pair of cubes, a linear chain, a square, and a T-shaped structure.

The method was so specific that when the researchers placed 25 pairs of matched cubes in a single pot, all the cubes located and adhered only to their partners. This ability to assemble multiple components simultaneously is called multiplexity, and the results show that the new system has the highest degree of multiplexity of all existing mesoscale self-assembly systems.

“Designing a strategy that leverages the power of self-assembly used by living systems to direct construction of tissues from tiny component parts represents an entirely new approach for tissue engineering,” said Don Ingber, the Wyss Institute’s founding director.“Peng and Ali have created an elegant and straightforward method that could permit tissues to be reconstructed from within after a simple injection, rather than requiring major surgery.”