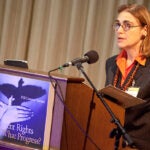 This is the first of four reports echoing key themes of The Harvard Campaign, examining what the University is accomplishing in those areas.

While achievement and excellence have always been Harvard hallmarks, sharing knowledge and new insights across the University’s Schools, centers, and institutes has not always been easy. But that has been changing rapidly, as faculty and students have embraced new collaborative and innovative approaches set to reshape education and learning in the 21st century.

“We live in an era when knowledge is growing in importance in addressing the world’s most pressing problems, when technology promises both wondrous possibilities and profound dislocations, when global forces increasingly shape our lives and work, when traditional intellectual fields are shifting and converging, and when public expectations and demands of higher education are intensifying,” Harvard President Drew Faust said during her opening-year address before last weekend’s launch of The Harvard Campaign. “I see many unprecedented opportunities in these developments, opportunities for our teaching, for our research, and for our global connections and reach,” she said.

Indeed, new opportunities for collaboration among faculty and students are blossoming in every corner of Harvard and touching virtually every discipline, from the sciences and business to theology and the arts.

Making scientific research — and scientists — better understood has been a priority at the Derek Bok Center for Teaching and Learning.  Robert A. Lue, the Richard L. Menschel Faculty Director at the Bok Center, uses elaborate videos to help illustrate the complex inner workings of cells for his students in the Department of Molecular and Cellular Biology. He encourages students in the sciences to foster better communication with their colleagues and the public by using interactive multimedia to tell compelling stories about their research. The effort is designed to engage students, prompt deeper learning, and ensure that the public will continue to understand and value publicly funded scientific research.

“When you look at the national landscape, the traditional mode of lecturing, while still important, is clearly not the only way to teach,” Lue said in an earlier Gazette interview. “Increasingly, faculty members are exploring new ways of using technology and new ways of engaging students. I’ve never seen this level of broad-based interest in creatively rethinking teaching and learning among both faculty and students, so it’s a tremendously exciting time to be in the classroom.”

In the international realm, earlier this year nearly 50 Harvard professors, students, researchers, and doctors from the Graduate School of Design, Harvard Divinity School, Harvard School of Public Health, and the François-Xavier Bagnoud Center for Health and Human Rights traveled to India to attend the Maha Kumbh Mela, an eight-week Hindu festival that occurs only every 12 years. The festival is a mass gathering of ritual bathing that also incorporates commerce, politics, public health, and other services of interest to academics in many fields. Afterward, the group convened to discuss the many findings they unearthed from the trip, including a massive data set of cellphone usage that will help those studying ways to overcome the challenges of curating, storing, analyzing, and sharing “big data” collections.

Closer to home, at the American Repertory Theater (A.R.T.), local high school students recently have tackled the complex issues surrounding the Civil War — such as freedom, civil rights, and social justice — in a pioneering and artistic way. The students researched the war and then wrote and produced “The Proclamation Project,” with the help of A.R.T. fellows and education staff who brought history alive.

With the success of edX, Harvard and MIT’s joint online education platform launched in 2012, HarvardX continues to expand the ways in which traditional course offerings can be reimagined for the global classroom, and also help with in-class learning at Harvard.

This fall, the Harvard Kennedy School will launch its first HarvardX class on national security issues and the civil war in Syria. Co-led by Graham Allison, director of the Belfer Center for Science and International Affairs, and David Sanger, chief White House correspondent for the New York Times, the class will include “brick and mortar” graduate students as well as 500 virtual students who will get to audit weekly lectures, complete assignments, and participate in student-run strategy talks in the cloud.

HarvardX has also prompted new alliances between the Faculty of Arts and Sciences (FAS) and Harvard Business School (HBS).

Newly appointed as vice provost for advances in learning, Peter K. Bol, the Charles H. Carswell Professor of East Asian Languages and Civilizations, has partnered with William C. Kirby, T.M. Chang Professor of China Studies at Harvard University and Spangler Family Professor of Business Administration at HBS, to offer a history course this fall on China. Most of the videos, maps, text, illustrations, recordings, and photographs that current students will use were originally produced by students enrolled in Bol’s innovative Chinese history class last spring.

Elisa New, Powell M. Cabot Professor of American Literature at FAS, is readying her first online class, a survey of early New England poetry and Walt Whitman. To best reach far-flung students and to visually enrich the study of historic words on a page, New has produced a series of video lectures about 17th-century Puritan poetry that were shot at key locations throughout New England and New York City, with the help of some undergraduate and graduate students. It’s an exciting way to approach literature, New said, and one she has eagerly embraced, since, “I love being part of an experimental startup project where we figure it out as we go along.”