Biases that can blind us 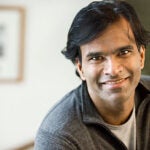 Unconscious bias has been recognized as a root cause of prejudice, but research says it has another insidious effect as well: It robs us of free will.

Harvard psychologist Mahzarin Banaji, the Richard Clarke Cabot Professor of Social Ethics, highlighted the potentially pernicious effects of the hidden biases that people carry, telling members of the new freshman class Thursday that being aware of one’s own biases is the first step toward making fair judgments and decisions.

Banaji, delivering a lecture before about 200 freshmen in Harvard’s Science Center, spoke as part of the Opening Days activities to help new students get acclimated to campus.

While racism, sexism, and other overt forms of bias draw a lot of attention, Banaji used a series of exercises to alert students to other types of bias, such as our unconscious preference for people similar to ourselves and how our decisions may be influenced not just by logic and reason, but by the prominence — rather than the significance — of information. Even our preconceived notions of how things are supposed to be can blind us to contrary evidence.

“Once you have that awareness, all things become possible,” Banaji said.

Banaji’s lecture, “Blindspot: Hidden Biases of Good People,” was just one of many activities during the week for the freshmen, which included social functions, campus tours, meetings with advisers, a campfire, a talent show, and the Freshman Convocation on Monday.

Dean of Undergraduate Education Jay Harris introduced Banaji, saying that after days of hearing people tell them what Harvard classes are like, Banaji’s talk would give incoming students a taste of what’s to come.

“This is an effort to provide you with some sense of what a Harvard course is all about,” Harris said.

It was a taste that many in the audience enjoyed. Though she dealt with a serious subject, Banaji was humorous, too. Dylan Tam, a freshman from Toledo, Ohio, said the talk opened his mind about everyday biases, such as whom you sit with in Annenberg dining hall.

“If you have a superficial connection with [someone], you start talking to them more than others,” Tam said.

Another freshman, Kevin Ma, also enjoyed the lecture, and said that after days of getting ready for classes, he and others were ready for the academics to begin.

“Everyone seems ready to engage,” Ma said. “We’re ready to do some work.”

Along those lines, Banaji cautioned students against relying too heavily on Harvard’s “shopping period” in selecting classes, since unconscious biases can come into play.

She added that biases aren’t always bad. Some, such as preferences for specific schools or sports teams, are benign. Even biases against race or color may have been important at one point in evolutionary history, she said, as early humans had to be wary of strangers. In today’s world, however, unconscious biases should be uncovered because they can cause everything from missed opportunities to bad business decisions to an insular social circle.

Banaji also discussed seemingly benign ways in which biases can be perpetuated, through simple decisions such as who people choose to help. She cautioned students against surrounding themselves with people just like themselves.