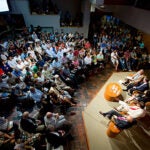 When Buddhist monks in Myanmar, formerly known as Burma, protested skyrocketing fuel and food prices in 2007 by chanting blessings, they were beaten by government troops who suppressed the protests by firing on demonstrators. The Economist put the holy men on its cover. The headline: “Burma’s Saffron Revolution.”

Earlier this year, when monks associated with a Buddhist nationalist movement in Myanmar urged the shunning of Muslims, their campaign was seen as inciting violence that left 40 dead and thousands displaced. This time when a monk was featured on a magazine cover he looked ominous: Time headlined its image of U Wirathu “The Face of Buddhist Terror.”

The two portrayals, juxtaposed, are incongruous: In one, Buddhist monastics, noted for their philosophy of nonviolence, are perceived as victims; in the other, aggressors.

But Charles Carstens, a Ph.D. student in Buddhist studies affiliated with the Committee on the Study of Religion, sees a common thread. Both the monastic demonstrations of the Saffron Revolution and the recent campaign to suppress Islam, he says, are couched in rhetoric of “care” for the Buddhist community and their legacy in Myanmar.

This “complex relationship between violence and ‘care’” is important for understanding religious violence not only in Myanmar but around the world, and is a topic scholars in the humanities are especially suited to explore, said Carstens, who lived in a Buddhist monastery in central Myanmar at the time of the Saffron Revolution.

Carstens spoke on Sept. 11 at the Divinity School (HDS) as part of a panel hosted by the Center for the Study of World Religions: “Studying Religion in the Post-9/11 World: The Importance of Taking Religion Seriously from a Humanities Perspective in Troubled Times.”

“The study of religion from a humanities perspective has an enormous amount to offer in terms of deeper, richer understanding of events that are of importance to everyone in the world today,” said Anne E. Monius, acting director of the center and a professor of South Asian religions, who introduced the panelists.

Joining Carstens and Monius were Michael D. Jackson, a visiting professor of world religions; Kevin J. Madigan, Winn Professor of Ecclesiastical History and associate dean for faculty and academic affairs at HDS; and Michael Puett, a professor of Chinese history and chair of the Committee on the Study of Religion.

Jackson, an ethnographer who has done extensive fieldwork in West Africa and with aboriginal Australians, joined the other panelists in reflecting on the diversity of scholarship in religious studies at Harvard.

People everywhere, he said, share a view that “one’s well-being depends on one’s connectedness to an ‘elsewhere’ or ‘otherness’ that lies beyond the horizons of one’s own immediate life-world.” This “extra-human” dimension at “the limits of what can be thought or said” encompasses “relationships with ancestors, nature, God, foreigners, even the unborn,” and thus is a province shared by both ethnographers and religion scholars.

Madigan, whose recent focus has been on the Catholic Church’s perceived inaction in response to the Holocaust, discussed the rise of Nazism as what the philosopher Eric Voegelin called “political religion.” While the Nazi movement, with its messianic leader and liturgical-style rallies, is often called a prime example of the sacralization of politics, Madigan said he is not convinced that defining political movements as “religious” is apt.

“It seems to me the central problem is that it becomes impossible to set any boundaries to ‘religion’ as distinguished from other cultural phenomena,” he said, echoing religion scholar Timothy Fitzgerald’s complaint about academics’ wide use of the term “religion” to describe everything from Marxism to vegetarianism to monster-truck rallies. “If everything is religious, then nothing is religious,” he said.

Puett turned to ancient China, where placating and invoking the spirits of ancestors was part of a lifelong process of “working out” the complexities of existence in the elaborate patriarchal hierarchy to which the living and the dead belonged. And “work” it was: These visions of the human condition were “endlessly being worked upon,” as a world of “organic harmony and patriarchal lineage” was “actively constructed,” he said.

The humanist, Puett said, should “wrestle with religious traditions from around the world not because they’re right [or] always good, but because people have been wrestling with them for centuries … Even if you think you have something worked out, the demons return. They always do.”