A scholar’s brush with religious ire 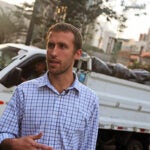 Reza Aslan, M.T.S. ’99, whose book “Zealot: The Life and Times of Jesus of Nazareth” soared on the best-seller lists after an infamous Fox News interview last summer, spoke at Harvard Divinity School on Thursday, saying that while he is a Muslim, he also is “a follower of Jesus” whose “life is deeply influenced by Jesus.”

Aslan discussed his portrayal of Jesus as a historical figure and revolutionary insurrectionist against Roman authority rather than as a sacred figure. He also addressed the perils of discussing religion from a scholarly standpoint, his personal faith, and the challenges faced by a scholar who writes for a popular audience.

Aslan’s focus in “Zealot” on the secular Jesus has troubled some people of faith. His bold assertions, narrative endnotes, and determination to reach a lay audience have called forth objections from some in academia. But in front of a standing-room-only crowd, Aslan focused on his experience of trying to explain a religious matter in ways non-academics understand, and urged his listeners to learn how to bring tough religious questions before the public successfully.

As expected, Aslan was asked about his July 27 Fox News interview. In the exchange, which afterward went viral on the Internet, host Lauren Green repeatedly asked, “Why would a Muslim write a book about the founder of Christianity?” Aslan repeatedly defended his academic credentials and his treatment of the subject. The interview brought sharp criticism of Green’s journalistic approach, focusing on Aslan’s professed faith instead of the merits of his scholarly work.

“Look, I know what Fox News is about,” Alsan said to those gathered in the Sperry Room. “Honestly, I was more confused than anything else … The interview was over, and I thought ‘that was weird,’ and I just forgot about it until it became this phenomenon that very quickly stopped being about me, and … became about very important discussions about media and journalistic bias, religion and society, the role of academia in public life and in popular discourse.

“These are conversations we [in theology] have amongst each other all the time, and that nobody else listens to,” he added, as the room erupted in rueful laughter. “It was exhilarating to me.

As murmurs of assent rose, Aslan emphasized:  “We have to change that. The responsibility rests on us.

“I take faith seriously,” he said. “What I am talking about is very deeply a part of someone’s identity, and they can easily feel as if they are under attack … For us [in academia], it makes sense that we separate our faith from our academic research. But until we figure out how to communicate better with the outside world — and to encourage it among ourselves — then [such an interview] is what’s in store for all of us.”

Aslan blamed some of the controversy on those in his field. Chastising the academy for “punishing” popular writing, he recalled how, as a young scholar, his determination to obtain a master’s in writing set back his academic career.  “This is the ethos of academia: Your wanting to be a better writer makes you a weaker candidate.” But he also sees change in the works: “I meet younger scholars who are more engaged in popular media and popular discourse, who are not afraid to break free of the ivy walls.”

He urged students to push back against the practice of writing work impenetrable to anyone outside of the scholarly world. “Simplify, simplify,” he suggested. Practice scholarly methods, but remember: “Your grandmother doesn’t care about your methodology and research. She just wants to get to your conclusions.”