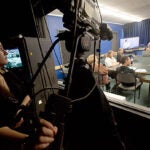 Clooney of HDS on the words and actions of Pope Francis

Almost from the moment in February that Cardinal Jorge Mario Bergoglio of Argentina became head of the Catholic Church as Pope Francis, he began making headlines for his down-to-earth, straightforward style: washing the feet of inmates at an institution for minors during Holy Thursday services; wading into crowds to shake hands; comforting ordinary citizens with papal cold calls. In recent months he has gained even more attention, for comments on gay marriage, contraception, and abortion during an informal press conference on the papal plane and in a wide-ranging interview with the Italian Jesuit journal La Civiltà Cattolica.

GAZETTE: What are your impressions of the pope’s first six months in office?

CLOONEY: I am, like millions of other Catholics in particular but many others too, genuinely surprised and gratified by this man becoming pope. As a Jesuit, I knew of him but I never knew anything much about him. And it is quite remarkable that the cardinals, who were chosen by Pope John Paul II and Pope Benedict XVI, would venture to choose a really different kind of person, pastoral, much more down-to-earth, with a very different style from Benedict and John Paul. And he has been surprisingly adept at small gestures that made a big difference — beginning with choosing the name Francis and washing the feet of a very diverse group on Holy Thursday, just a few weeks after his becoming pope. And then there are all the little stories about his phone calls and letters to people, opting for a simple car, not living in the papal palace, and of course his weekday homilies and his comments in casual contexts, such as what he said on the plane about our gay brothers and sisters. And now we have the interview. He is not deliberately, directly addressing doctrinal issues, not changing anything of that sort — not yet at least — but he is already changing the framework in which doctrines and values are to be thought about. I think all this has made a big difference thus far.

GAZETTE: In the interview the pope seemed to say that he looks at the Catholic Church as a top-down as well as a bottom-up institution. Is that a major break from tradition? How will that thinking impact his papacy?

CLOONEY: I think if you had had a private conversation with John Paul or Benedict, they would have agreed with this larger sense of church. It’s in the language of Vatican II that the church is fundamentally the people of God, and that the people of God is not just the Vatican or the bishops. They believed this too. But the truth of this wider reality of church really hasn’t, in the decades since the council, been wholeheartedly embraced and implemented as the ordinary practice of the church. Figures at the top have still taken the lead and kept control of so much of what goes on, and caution won out over creativity, again and again. There was no “bottom-up” energy affecting the Vatican, as far as most of us could see. Even at higher levels, consultation seemed more an ideal than a reality. In the interview, Francis points out how Vatican II called for a process of consultation with the various bishops’ conferences from around the world, but the synods that have happened, regularly, seem to have been encumbered by a highly stylized formality in which little that is truly new has been really allowed to be said, as if the outcomes were planned in advance. The fact that Francis is genuinely saying that the church can be the church only if people at all levels and all places have a role is an important step forward — and back to the council. But how that translates into practice will be the key issue. … If he does truly make room for these multiple voices, that’s going to be a big change.

GAZETTE: Pope Benedict referred to homosexuality as an “intrinsic moral evil,” but Pope Francis has said the church has become too focused on issues like abortion, homosexuality, and contraception. Is he suggesting a new position for the church? Is this rhetoric going to lead to any kind of significant policy change, or is it simply a change of tone?

CLOONEY: Here too, it’s a change in tone, not in doctrine — but a change in tone that can change the church in a deeper way. In some of his statements, Benedict was in part at least following an old schoolbook theology that held that what’s intrinsically “ordered,” according to God’s plan, is heterosexuality, from which it follows that homosexuality is intrinsically disordered, and defective. There is a certain manner of scholastic logic to the language of “intrinsic moral evil” — though I must leave the details of this to ethicists to elaborate! But even when the Vatican was saying, “We don’t condone such practices,” it was also saying, “We welcome everybody into the church.” Thus there was always an ambiguity, because words of welcome and words of judgment accompanied one another, without anyone really explaining how it was supposed to be received by the people affected. What Francis is doing, as in his comment on the plane — “Who am I to judge?” — is quite amazing, coming from the mouth of a pope. He is, I think, putting those scholastic technicalities into the background, and saying that our first instinct has to be to welcome and honor our brothers and sisters who are gay, and to stop speaking so pejoratively about what is ordered and disordered, etc. Still, I don’t think he is going to go so far as to say explicitly that gay relationships and gay marriage are OK. But such might seem to be the implication: You can’t respect gay men and women and take them seriously in God’s eyes if you add, “but only if you are one hundred percent celibate.” In reality, that’s not going to work, and I am sure Francis knows this. It is also the case, I must add, that popes rarely explicitly disagree with their predecessors; Francis might go a very long way in a different direction than Benedict, but he is unlikely ever to say, “I disagree with Benedict.”

GAZETTE: It seems that with his recent comments, Pope Francis might be suggesting a greater role for women within the church, and yet this weekend the Associated Press reported he kept in place Archbishop Gerhard Müller, who “directs the Holy See’s crackdown on nuns suspected of undermining Catholic teaching on the priesthood and homosexuality.” How do you reconcile his language with his action?

CLOONEY: A lot of it has to do with who Francis is, having grown up in what I would guess to have been a fairly traditional background in Argentina. Our personal attitudes and our policies are all mingled together, and what is liberal in one context may seem conservative in another. He is saying the right things about equality, dignity, and so on, but even in the interview he is still confirming his view that there are differences between men and women that will not go away and could make a difference. In any case, I am not the one to know how far he would go in terms of women’s ordination. But he has said on various occasions that you can’t talk about the role of women in the church if you trivialize them and condescend toward them, leaving all authority in the hands of men. Respect requires that there be a real sharing of responsibility in the church, where more women are called to more positions of leadership — over clergy. His recognition that words alone do not suffice could open the door to a new vision — practical, realized, enacted — of women in the church. But short of the more radical step of clearing the way for the ordination of women, there are more likely things he could easily do: [He could put] women in charge of offices in the Vatican, no longer serving under clergy; there can be women cardinals, since you don’t even have to be a priest to be a cardinal; and Francis could revive the deaconate for women, since historians tell us that there is a lot of evidence … that there were women deacons in the early church. Whether he will put his words into practice by doing any of that, I cannot say. But I think his instincts are certainly more forward-looking in this regard than those of John Paul or Benedict, neither of whom seemed, at least from an American perspective, to “get” what women are concerned about. Listening is hard work. As for Archbishop Müller, that Francis has kept him in place does not necessarily tell us anything about what the pope will do regarding greater respect for nuns and their service in the church, and those serving at the will of a pope usually adjust their style and policies to fit the attitudes of a new pope.

GAZETTE: What was your response to Pope Francis categorizing himself in the journal interview as first and foremost a sinner?

CLOONEY: To be honest with you, I wasn’t too much surprised by it, because this awareness of one’s own sinfulness is familiar Jesuit rhetoric. We are reminded in many of our Jesuit documents of the truth that we are first of all sinners, sinners in God’s eyes, but also sinners who are saved and sent out on mission. We are people in need of conversion ourselves, over and over again, no matter what point in our lives we are at. So while this is an important admission on his part, because it is true, it is not a new way of speaking. … It was more revealing to me that when he talked about his time as provincial superior of the Jesuits in Argentina, he admitted that he had been unprepared, a bit foolish and too rigid, too young and inexperienced for the job. This was an admission in practice of his sinfulness in the real world, expressed with a certain regret, that things might have been different.

GAZETTE: Does this type of long-form interview, which was conducted over three separate meetings in August, represent a break from tradition?

CLOONEY: John Paul, to his credit, opened things up and was more accessible than many of his predecessors. Any modern pope, like other leaders, has to be accessible to the media. Benedict sat for interviews, but his exchanges come across more as those of a professor sitting with his students and explaining things to them. Benedict’s interviews were long and technical expositions that became books. But Francis’ interview seems so different, as a candid back and forth, much more humane in tone, down-to-earth. We can hear his living voice even in the edited version of the text. The other thing experts have pointed out is that Francis made use of his Jesuit connections to arrange the interview and to disseminate it. Usually a pope works entirely within the structures of the Vatican and its offices for the public dissemination of papal messages. Everything comes out through the Vatican press office, after being vetted by his secretaries who check his words carefully for their policy implications, etc. Francis may have caught his own Vatican officials by surprise, since the interview occurred in Jesuit circles and was disseminated through Jesuit media outlets. Again, if this is so, it does not prove anything about what Francis wants to say and be as pope, but the circumstances do indicate a fresh, novel approach.

But all in all, this hopeful beginning, fresh air flowing into the church, will be tested in practice in the next year or two, as Francis, this surprising leader, tests his abilities to govern and to lead this very large and very structured organization. Even with popes, “it is by their fruits that you shall know them.”