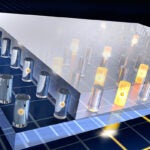 Here’s a short geometry test: How many straight lines can be drawn connecting two points on a flat plane? If you make two angles on a triangle smaller, does the third get larger or smaller? If you split a square diagonally, are the two resulting triangles the same size or different?

If the answers — for the record, one, larger, and the same — seem obvious, they should be. The questions are examples of the innate understanding of abstract geometry that all humans possess, even if they’ve never studied the subject. For researchers, however, the question is: Where does that knowledge come from?

The answer, say Harvard scientists in Elizabeth Spelke’s Laboratory for Developmental Studies, may lie deep in our evolutionary history.

Previous research has shown that young children and animals use geometric information in similar ways — to navigate environment and to recognize shapes. In a study published last month in the Proceedings of the National Academy of Sciences, researchers presented evidence that young children rely on the same abilities when exercising uniquely human abstract geometric skills, such as reading maps. The results suggest the innate understanding of abstract geometry among humans has origins in the evolutionary past.

“There are two possibilities for the origins of this human-specific innate understanding of geometry,” said graduate student Moira Dillon, the first author on the study. “One is that it’s something that’s completely new to humans; it’s something we’ve arrived at through our complex cognitive development. The other possibility is that it derives from existing geometric skills we’ve inherited from other animals.”

Using tests similar to those used with other animals, as well as tests specifically designed to tap into young children’s ability to read geometric maps, Dillon and her colleagues showed that children use the geometric abilities shared with other animals to understand uniquely human spatial symbols.

Previous tests, Dillon said, demonstrated that children as young as 2½ could relate the abstract geometry in a map to the real world, but it was unclear how. The new work revealed that young children, unlike animals, can flexibly use their geometric sensitivities — to distance and direction or to angle and length — to read maps.

Children were presented with a map of the full triangle, and were asked to place a stuffed animal at a location marked by a dot.

Although young children showed flexibility in their use of geometry when reading maps, there were still limitations: They were unable to relate the two geometric sensitivities to each other. Dillon said previous research has shown that by about age 12, children begin to integrate these two geometric sensitivities — relating distance information to angle information. Older children and adults therefore achieve the sort of abstract geometric knowledge that has long puzzled researchers.

“Adults, because they have a more advanced, mature abstract representation of geometry, can use both types of information at the same time,” she said. “But because those intuitions are fully developed, it’s difficult to look at adults and understand their origins.”

The challenge for researchers now is to understand how the ability to use geometry for navigation and shape recognition come together to form our abstract innate knowledge about the points, lines, and figures on the Euclidean plane.

“We have to figure out what happens between age 4 and age 12,” Dillon said. “How do we get from this incredible early ability to use symbolic geometry in maps to the later-developing, very abstract ability to reason about points and lines and the behavior of triangles when they’re manipulated? We think we know now where these intuitions come from, but we’re not sure how they come together.”