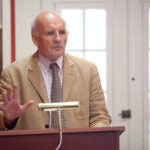 Thousands of onlookers will join President Obama at the Lincoln Memorial on Wednesday to mark the 50th anniversary of the historic March on Washington and celebrate a powerful, poetic moment in the Civil Rights Movement. The commemoration stirs not only potent memories of that iconic day in 1963, but for some with Harvard ties, mixed emotions about the march’s lasting legacy.

Charles V. Willie was a sociologist at Syracuse University in 1962 when he moved to Washington, D.C., after Attorney General Robert F. Kennedy tapped him to lead a federal research program there to combat juvenile delinquency.

Now the Charles William Eliot Professor of Education Emeritus at Harvard Graduate School of Education, Willie had been a friend of civil rights leader Martin Luther King Jr. since their days as teens at Morehouse College in the mid-1940s. So it was not long before Willie began attending planning meetings for what would turn out to be an unprecedented mass congregation to protest racial discrimination and economic inequality, he said.

But as the day approached, Willie found himself torn. A young and ambitious professor, he had received a prestigious invitation to present a paper on his study of juvenile delinquents at the American Sociological Association’s annual meeting in Los Angeles — also scheduled for Aug. 28, 1963. Willie agonized over the conflict.

“I said, ‘Well, if what happens during the march happens and makes this a better country, they’re going to need people who can do the things that need to be done,’”

Willie said. “Oh, it just broke my heart, but I did [go to the conference], and I never will forget. … As soon as I gave my paper, I ran back to my room, I was half crying, half just feeling great seeing all” the people in the crowd on television.

In 1962, a year before the March on Washington, Martin Luther King Jr., soon to be Nobel Peace Prize laureate, delivered a speech to the Harvard Law School forum.

Ellen Lake ’66 had just finished her first year at Radcliffe and fortuitously was spending the summer in the nation’s capital. Although she was not yet an activist, it was “natural” for her to attend the march, she said.

“Do I remember King’s speech? I guess I do, but I didn’t say to myself, ‘This is going to be a speech that people talk about for generations,’ just because the whole thing was so magnificent,” said Lake.

As a reporter for the Harvard Crimson, Lake wrote how she was upset that King continued to emphasize desegregating lunch counters and hotels in the South instead of focusing his efforts on voter registration. But, inspired by the march, she went to Mississippi to help register black voters in what would become known as “Freedom Summer.” Infamously, three volunteers were lynched that June in Philadelphia, Miss., by members of the Ku Klux Klan. A year later, Lake co-founded The Southern Courier, a weekly newspaper in Montgomery, Ala., devoted to news of the Civil Rights Movement, and later run by some Crimson colleagues.

“What I remember most was when the [John F.] Kennedy administration was trying to prevent it from happening,” said Lake, now a lawyer in Oakland, Calif. “And James Reston, the distinguished columnist in The New York Times, was writing that there would be riots and the whole Civil Rights Movement would be set back by the terrible behavior that would occur, and this was a terrible idea … and of course, exactly the opposite occurred.”

While the anniversary highlights political and social gains realized since 1963, some analysts say the event is also a bittersweet reminder that racial injustice and economic inequality are still very much alive.

“It’s important because it defines America and it makes visible what white America doesn’t want to acknowledge: namely, its history of slavery, its history of separate but equal,” said Preston N. Williams, the Houghton Research Professor of Theology and Contemporary Change at Harvard Divinity School.

“The March on Washington typically evokes the memory of Dr. King’s ‘I Have a Dream’ speech, which emphasized the color-blind ideal,” Tomiko Brown-Nagin, the Daniel P.S. Paul Professor of Constitutional Law at Harvard Law School and professor of history at the Graduate School of Arts and Sciences, said in an email. “King’s speech should be recalled; it reminds us of a less cynical leadership and more hopeful conversation about race. At the same time, when I recall the March on Washington, I have in mind an alternative narrative, the behind-the-scenes struggle over the content of John Lewis’ address,” she said. Lewis, a civil rights leader, is now a longtime U.S. congressman.

“What I think about a lot is how dramatic and historic and important and affirming the change was when segregation ended, and yet, given that, how little progress we’ve made,” said Diane McWhorter, a Du Bois Fellow at the W.E.B. Du Bois Institute for African and African American Research and the author of “Carry Me Home,” a Pulitzer Prize-winning history of the Civil Rights Movement in her native Birmingham, Ala.

Aside from the Civil Rights Act and the Voting Rights Act, Brown-Nagin said, “The legacy of the March on Washington lies in the mass assembly itself, in the willingness of people from all over the South, particularly impoverished people, to travel to Washington to protest for equal rights.

“If the March on Washington offers any lesson for today,” she added, “it is that people who are aggrieved by perceived injustices must be willing to protest, to bring pressure to bear on decision-makers. The articulation of grievance is essential to social change.”

As grand and uplifting as the march was, protest alone may not be enough.

“The negative lesson perhaps is that while a mass moral witness is important, it’s not sufficient,” said McWhorter. A. Philip Randolph “really understood that you had to have sustained, organized mass movement to get any kind of structural change. The spectacles are important symbolically, but without the infrastructure to back it up, it’s not sufficient.”