One goal, many players 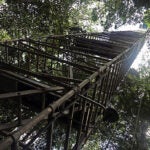 Atop the Amazon rainforest

Collaborations among Brazilian organizations are another vital part of the project

In addition to working closely with the U.S. Department of Energy, his Brazilian collaborators include the Amazonas State University (UEA), the National Institute for Amazonian Research (INPA), the State of Amazonas Research Foundation, the University of São Paulo, the National Institute for Space Research (INPE), the State Funding Agency of São Paulo, and the Brazil Scientific Mobility Program, which helps facilitate exchanges of students and professors between Brazil and the United States.

“Really, we come together as a team,” Martin said. “It’s wonderful to have all of this support.”

GoAmazon2014 is part of the Large Scale Biosphere-Atmosphere Experiment in Amazonia (LBA), the largest umbrella for research in the Amazon, which explores everything from social issues to scientific inquiries.

“Now it’s one of the most important projects in the LBA,” said Antonio Manzi, INPA senior scientist. “We know little about the tropical climate and cloud formation, and many, many researchers and students are making a really big effort to advance the science in this area. It’s important to have scientists from the Amazon and from other states involved, as well as the cooperation with other groups in the United States and Europe.  And it’s very, very important to have Harvard as [a] partner to advance the knowledge about this region.”

The collaborations among Brazilian organizations are another vital part of the project, said Rodrigo Augusto Ferreira de Souza, a professor at UEA who will analyze satellite data. “One of the most important things for this type of research in Manaus is to build a local research team, and to capitalize on our network of Brazilian experts.”

“The Department of Energy is the nucleus,” added Martin, “but with our Brazilian partners, we are making it and growing it into something much more substantial.”

See “Atop the Amazon rainforest” for more information about the research.