Atop the Amazon rainforest 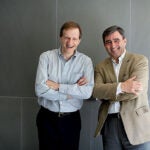 Harvard scientist, others study how pristine air becomes polluted, and how that may change climate

This is third in a series of stories about Harvard’s engagement in Latin America.

MANAUS, Brazil — Walking along a path in the Amazon rainforest, several overheated travelers come across a copper-colored brook rippling under a mossy wooden bridge. It’s an inviting sight. But the beckoning waters could well camouflage a deadly predator.

“The huge snake the anaconda loves to stay in these small rivers,” said Bruno Takeshi, a tall, unflappable Brazilian, referring to the massive reptile that squeezes the life out of its prey.

On this steamy afternoon in early August, Takeshi, who studies how changes in soil relate to climate science, and his collaborators, Harvard Professor Scot Martin and Martin’s Ph.D. student Suzane Simões de Sá, don’t linger by the river. Instead, they continue their twisting trek through the thick forest ringing with the songs of unseen insects and birds, until they reach their incongruous goal, a 177-foot aluminum tower.

The tower is used in climate research, and resembles a number of such structures that will soon be part of a massive, coordinated campaign to track something that, over decades, could prove more deadly than the Amazon’s anacondas, something that floats invisibly, high above the pristine jungle: air pollution.

The research project is called GreenOceanAmazon2014 (GoAmazon2014), a collaboration among the U.S. Department of Energy and several Brazilian and other international partners. The program, for which Takeshi is project manager, studies the environmental impact of a growing pollution plume generated in Manaus, Brazil, a burgeoning industrial center carved from the dense forest.

A busy city near an unbroken forest

Researchers hope to ascertain how the city’s smog is affecting some of the cleanest air in the world, changing cloud formation and rainfall in the region, and influencing global climate change. For scientists, the busy city encircled by miles of unbroken forest is a perfect natural laboratory, a kind of controlled experiment.

“Manaus is a great test bed. It’s an isolated urban region with 2,000 kilometers of forest around it,” said Martin, Harvard’s Gordon McKay Professor of Environmental Chemistry, the principal investigator for the project. In “most places, there are so many possible pollution sources, it’s very difficult to dissect and interpret the data. Here, it’s a much more straightforward experiment, given there’s only one major pollution source.”

On the hike to the tower, Martin pauses occasionally to wipe steam from his wire-rimmed glasses. In his checked shirt, khaki shorts, black sneakers, and bright yellow Brazilian national soccer team cap, he looks less like a jungle explorer than a casual tourist who took a wrong turn in the woods. But he is as comfortable and confident in this rugged environment as any whip-wielding Indiana Jones.

Climbing the tower as it sways with the wind is not for the faint of heart. Slim aluminum scaffolding connects a series of equally thin platforms and ladders. For the first-time climber, the ground disappears at an alarming rate during the ascent as the green leaves of hundreds of species of trees quickly swallow the brown forest floor. Higher up, the incessant buzz of the jungle is replaced by a calm silence, the heat eased by a steady breeze. At the top, above the tree canopy, the view is of a “green ocean,” an endless expanse of emerald in every direction.

Martin’s first Amazon climb took place in 2008 during a project called the Amazonian Aerosol Characterization Experiment (AMAZE08) that set the groundwork for the GoAmazon2014 campaign. Martin, whose research focuses on tiny atmospheric particles called aerosols and their impact on cloud formation, rainfall, and climate change, had spent years experimenting with the Harvard Environmental Chamber, a giant, flexible Teflon bag within which he could study how aerosols reacted with things like ozone and highly reactive hydroxyl radicals to affect cloud formation. He was taking his first sabbatical and looking to branch out from the confines of his Harvard lab.

Martin, who is married to a Brazilian, immediately thought of the Latin American country for his yearlong break. “I had never done any research outside of the laboratory before … and if you are going to go to Brazil, what captures the imagination most is Amazonia.” The isolated area was the perfect environment for studying atmospheric particles, a living lab with pristine air where he could explore the links between biological processes and climate.

The influence of particles on climate shifts

Martin’s work is helping to illuminate a dark area in climate science. Though scientists have long understood the impact of carbon dioxide and methane gas on global warming, they know relatively little about the particles that Martin studies, or their possible influence on climate shifts and global warming trends.

“The big uncertainties and controversy around climate change are really centered on these atmospheric particles,” which are difficult both to control and to characterize, said Martin. Such particles vary widely in size, from 10 to 1,000 nanometers. They also have different chemical compositions. (Sulfate particles reflect solar radiation, while black soot particles mean energy gets absorbed in the atmospheric column, which in turn can change circulation patterns.) The particles also interact with clouds and can change precipitation rates.

For years, scientists theorized that the air above the rainforest contained organic molecules released by plants in the forest below. The question, however, was whether those molecules reacted with chemicals in the atmosphere — like ozone or a highly reactive molecule called hydroxyl radicals — to create aerosol particles, and if and how those particles affected rainfall.

During his 2008 sabbatical, Martin used a new 112-foot tower, where a slender copper tube sucked clean air from above the trees into a small steel container crammed with instruments, including the delicate mass spectrometer, a fine-tuned machine that can provide a fingerprint of the atmosphere and distinguish between primary organic molecules and the secondary aerosol particles they form. The results showed Martin and his colleagues that the aerosols did indeed come from chemical reactions between the organic molecules released by plants and chemicals in the atmosphere. Further testing and studies revealed that those aerosols were directly influencing levels of rainfall.

“That sets up the background for the GoAmazon2014 experiment,” Martin said, “because this means we can ask the question: ‘If emissions from the forest are controlling those aspects of climate, what does it mean when they couple to pollution?’ ”

A similarly ideal condition for his current experiment — and his second sabbatical — is the proximity of Manaus. This busy industrial city, while bringing prosperity to many, has created a widening pollution plume.

One hundred and fifty years ago, Manaus, the capital of the state of Amazonas, was awash in opulence, the result of a rubber boom that drew both workers and wealthy investors. But the city’s fortunes dwindled after British explorer Henry Wickham smuggled thousands of rubber seeds out of the country in 1876, thereby ending Manaus’ nearly exclusive control of the natural resource. After decades of poverty, Manaus slowly evolved again into an economic powerhouse, thanks to a decree making it a free-trade zone in the 1950s. Today, government tax exemptions and incentives have attracted a growing list of Fortune 500 companies and their manufacturing plants. In 1970, Manaus had 500,000 inhabitants. Now, it has close to 2 million.

On Manaus’ crowded streets, cars and motorcycles battle in daily duels of wit and will. Development plans displayed along the road offer a glimpse of the city’s resurgence. A giant blue sign touts condos and ball fields. Nearby a massive shopping mall looms. On another busy stretch, large silver letters announce the industrial home of the electronics giant Pioneer. Farther on are a Coca-Cola plant and a brewery. High-rises, sprawling homes, and factories cover the ground, except for small sections of green where the Amazon simply refused to yield.

One of the inevitable results of such size and growth — along with overcrowding and a distinct disparity in resources among the population — is the smog and soot that now plague the area.

As Martin explains it, the city’s primary pollutants dramatically alter the formation of atmospheric particles. Those changes then affect rainfall.

“If you start changing the clouds and changing the hydrological cycle, it has big implications,” said Martin. One of them involves climate change. “All of these are the tough issues of climate. So, in that context, our ‘slice’ through it is to try to understand where the particles come from, what are the size of the particles, and how that links into cloud formation.”

Tracking the air as it migrates

To accomplish his task, Martin and his GoAmazon2014 partners will create four sites that allow them to track the air as it migrates from a clean environment through the city’s pollution and beyond. “We will have one site up-wind of Manaus to measure the air parcel when it’s clean, one in Manaus that captures the emissions, one just across the river from Manaus that gets the fresh pollution, and one an hour away from Manaus where we can get the aged pollution.”

It’s that final site with which Martin is directly involved, an open pasture on a farm near the small city of Manacapuru. There, cordoned off in a field once reserved for grazing cattle, sits a 20-foot by 10-foot white container, a mobile lab containing sensitive scientific equipment owned by the Energy Department. In the coming months, 14 similar containers will arrive in advance of two intensive operating periods (IOPs) — February through March and September through October 2014 — when the site will host upward of 50 Harvard and Brazilian researchers and students, working from dawn until dusk.

Six small Department of Energy labs will sample the air. Each container will have a tube on its roof, consisting of a small copper wire, protected by a screen to filter out insects, and insulated by polyurethane to keep the air temperature consistent as it flows into a dryer that sucks away any condensation. Before the air reaches the mass spectrometer’s container, another machine will filter out large dust particles that could damage the device.

Still, this work is just the data-collecting phase for Martin, who along with his collaborators has submitted proposals for further funding that will, they hope, allow them to analyze the data they collect next year.

“It’s a multi-headed hydra that will get us across the finish line,” said Martin, who is quick with a laugh and quick to focus on the positive. “If you were here two years ago, you would know today that we are making progress.”

That progress could lead to key answers, as equatorial cities blossom in the coming decades.

“Hopefully, we can provide a knowledge base, one that lets people consider transportation or energy systems that could have a significantly reduced effect on air quality and a reduced effect on climate change.”