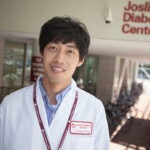 Successful grads of Crimson Summer Academy assure high school students that they, too, will thrive

Raymond, who attends Jeremiah E. Burke High School in Dorchester, never thought he would be able to go to college. But hearing Decembre and other members of a panel talk about their journeys from high school to college had a profound impact on his perspective.

The panel, made up of mentors who worked closely with 32 rising sophomores summer, featured three current Harvard students as well as students from Williams College and Boston College. Even more relevant to the audience, some of the panelists were graduates of the Crimson Summer Academy (CSA), the same program that brought Raymond and 85 other Boston and Cambridge high school students in all to Harvard’s campus this summer.

“The fact that they faced a lot of the struggles that we do, and got somewhere,” in their college pursuits, “made me think that I could do that myself,” Raymond said.

Now in its 10th year, the academy, which is funded by the Harvard President’s Office, is one of the most successful outreach programs that the University offers, with nearly all graduates of the program — 98 percent in the last decade — attending college and graduating within 4½ years.

The students, known as Crimson Scholars, arrive at Harvard in the summer before their sophomore years and return before their junior and senior years, living on campus as they complete programming to prepare them for success in college and beyond.

Diane Scott, one of three academic counselors with the academy, teaches college planning and preparation for the sophomore cohort and coordinated the mentor panel. She said the CSA was an opportunity for the students to get firsthand knowledge of how to overcome the challenges and obstacles that might deter them from attending and completing college.

“Our scholars really see the mentors as examples of where they can be two or three years from now,” Scott said. “Anybody else can tell you that it’s possible, or even give you the tools through SAT preparation, for example. But to hear from someone who literally was in your shoes, dealing with the same problems, just a few years ago, that brings out a hopefulness that goes beyond tools or resources.”

After a brief introduction, the panel took questions from the scholars. The questions ranged from dealing with friends who were unsupportive to how the students felt when they read their acceptance letters. Several questions focused on how the panelists were able to pay for college.

“My father’s a taxi driver, and my mom’s a medical assistant, so I knew that I couldn’t afford a full college tuition,” said panelist Obumneme Obukwelu ’15, a defensive tackle on Harvard’s football team. His parents immigrated to the United States from Nigeria in the 1980s.

That financial challenge, Obukwelu said, was “a real motivation to do extremely well in everything I could” to prepare for success. “I stayed on top of my grades and was proactive about reaching out to colleges,” he said. “Before you knew it, scholarships started lining up.”

“There’s a myth that schools don’t provide funding,” added panelist Olamide Olatunji ’14. “But they usually have financial aid. Harvard specifically is dedicated to working with students on that. If they accepted you, they want you to be here, and there are so many scholarships. I’m sure there is a scholarship for something at which you excel.”

Maxine Rodburg, director of the academy since its inception, said that the mentors add “a real authenticity” to the program.

“Many of our mentors come from similar backgrounds as our scholars, and that can be very inspirational,” she said. “For some of our scholars, college may seem like a gargantuan step. Many of them may not have anyone in their familial or personal lives who’s gone to college, so to be able to talk to someone about the next big leap forward who’s gone through it themselves, that’s really powerful.”

As the discussion came to a close, students approached the panelists to speak with them one-on-one, asking more questions about their journey and the challenges they experienced. Ever in touch with the program’s alumni, Rodburg added that many former scholars are now continuing their educations well beyond a bachelor’s degree.

“Our first alumna is entering Fordham’s law school in the fall,” Rodburg said. “One has completed a clinical social work master’s at Boston College. Another is earning a master’s in public health at Johns Hopkins. One is midway through a Ph.D. program in American Studies at N.Y.U., and at least three of our alumni are involved in the Teach for America program. It’s a great example of how far these scholars can go — and how much they can achieve.”