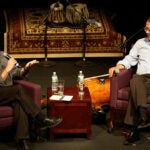 Snakes on the brain

To get a sense of Harvard’s breadth in the world, look to the south

This is the first in a series of stories about Harvard’s engagement in Latin America.

If you want to see how Harvard University works to gain knowledge and solve problems around the globe, look to the south.

Harvard scientists in Ecuador have rediscovered a horny-nosed lizard that may help shed light on the process of evolution. Researchers in Brazil are tackling asymptomatic malaria. Scholars in Peru are digging into the past to explore the ancient Moche civilization. Harvard faculty and alumni, in tandem with the Chilean navy, are developing plans for an Antarctic museum that would tie educational programs on science and climate into Chile’s schools. And students at Harvard Law School, with the help of international fellowships and clinical programs, are working on environmental law and human rights issues in Argentina, and on indigenous rights in Colombia.

The University’s ties to Latin America are both longstanding and intensifying. Harvard faculty and students are increasingly spending time in the region, collaborating with government organizations, academic institutions, local nonprofits, and community members on solving some of the world’s most pressing problems, as well as on groundbreaking research. Similarly, the University welcomes countless scholars and students from Latin America to campus each year to conduct research, teach, exchange ideas, and share their understanding and insight about the region.

“From Antarctica to the U.S.-Mexican border, Harvard’s programs in research and education have been blossoming in the life, physical, and social sciences, and in the humanities,” said Vice Provost for International Affairs Jorge I. Domínguez. “Faculty, graduate, and undergraduate students from all Harvard Schools study, research, take up internships to make the Americas accessible to the world of knowledge and learning, and to transform the work under way on the Harvard campus in Boston and Cambridge.”

Central to that work is Harvard’s David Rockefeller Center for Latin American Studies, a University-wide initiative founded in 1994 by then-University President Neil L. Rudenstine and David Rockefeller ’36, LL.D. ’69 (honorary). The men envisioned a center that would promote understanding of the “cultures, economies, histories, environment, and contemporary affairs of past and present Latin America,” strengthen the ties between Harvard and institutions in the region, and enhance the understanding of Latin America in the United States and abroad.

The center backs a range of projects, including a visiting scholars and visiting fellows program, and summer field trips and study-abroad programs for undergraduate and graduate students. It also provides broad support and information for Harvard faculty members conducting research in the region. As a University-wide program, the center also helps to connect various Schools at Harvard on a wide range of projects, acting as a facilitator for cross-disciplinary work.

“We really see the center as at the forefront of what President [Drew] Faust talks about, being more intentional about the globalization of Harvard and really being able to build collaborations and relationships that not only benefit Harvard by allowing people to go to Latin America, but also build research and collaborative relationships that benefit teaching and research here on Harvard’s campus,” said Kathy Eckroad, the center’s executive director.

Since its inception, the Rockefeller Center has opened three offices overseas, one in Santiago, Chile, that serves Argentina, Bolivia, Chile, Peru, and Uruguay; one in Sao Paulo, Brazil; and most recently, an office in Mexico that serves that nation and Central America.

“We see the offices as a good example of what Harvard is talking about doing,” said Eckroad, “engaging with the rest of the world in ways that make a difference.”

In the coming weeks, the Gazette will feature a series of stories about the University’s ongoing work in Latin America, including reports on trekking to a Maya ruin, climbing above the Amazon rainforest, and visiting coastal towns in Chile that are rebuilding after the earthquake and tsunami in 2010.