Opening a portal to summer 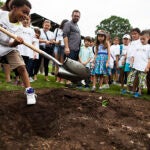 “I think I found a skull,” said Abigail Forrest, proudly holding up a dark green, furry blob with her tweezers for the others to inspect. She leaned in to note some eye sockets and what appeared to be two small, snaggly teeth. “It smells weird.”

Her friend and lab partner, Kennedy O’Neil, put down her scalpel and squinted through her plastic safety goggles to take a closer look.

“That’s definitely a chipmunk,” she said, “or a bunny rabbit.”

The two third-graders were spending a sunny July afternoon gleefully carving up undigested food particles coughed up by an owl as part of a summer mentoring session in science at the Harvard Allston Education Portal.

Established in 2008, the Ed Portal connects more than 1,700 Allston-Brighton residents to the University’s diverse educational resources and talent. In addition to year-round mentoring, the Ed Portal offers neighborhood children arts programming, access to the Blodgett Pool, and scholarships to Harvard-led soccer camps, as well as workshops, lectures, and cultural events for adults.

“It’s been a blast,” said the girls’ mentor, Annie Arrighi-Allisan ’15, about her first experience working with students from elementary to high school age. “I get to be a kid again.”

Arrighi-Allisan said planning weekly lessons for Abigail and Kennedy was pretty simple: “If I were 8 years old, what I would like to do?” she said.

Down the hall, siblings Fiona and Declan Russell each got one-on-one instruction to help keep their skills sharp while their classes at the St. Columbkille Partnership School in Brighton are on hiatus.

Fiona, 8, experimented with her mentor, Divya Seth ’14, using toothpicks and mini-marshmallows to build pyramids and cubes strong enough to support the weight of a textbook. With the first two efforts unsuccessful, they questioned the structural integrity of square-bottomed pyramids and fiddled with some triangular bases.

Nearby, Declan, 9, studied vintage “Calvin and Hobbes” and “Garfield” comic strips with his mentor, Ryan Heffrin ’13, to brainstorm about character development and storylines. The pair leafed through magazines, cutting out images from which they could storyboard their own comic strips. Declan settled on a story about an evil green genie who disrupted two football players and was vanquished, ultimately, by some clowns who appeared out of nowhere.

The students’ mother, Breeda Russell, said the mentors do a great job ensuring each session is different and engaging.

In “both the math and writing, they’re working to make it fun so it doesn’t feel so much like school work,” she said. “They have no objections, even though it’s summer.”

Making learning not just fun but cool is a key goal of the mentoring program, said Susan Johnson, manager of teaching and curriculum at the Ed Portal and program manager for life sciences outreach at Harvard.

To that end, the mentors will soon have four new iPads loaded with the latest multimedia software and applications to use at their discretion. The equipment will help them address different learning styles and promote the portal’s interdisciplinary approach. Students will be able to tackle everything from math exercises to music composition to developing narrative skills by recording sound and video for elaborate presentations.

Integrating the iPads into the learning sessions will be a careful and thoughtful process, one in which the mentors will play a critical role, Johnson said.

“It’s not tutoring. They’re not [education] students,” said Johnson of the mentors, most of whom return semester after semester to work with the youngsters. “They’re just passionate about connecting with the kids and wanting them to want to learn.”