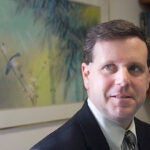 Eight years ago, two former Stanford University postdoctoral fellows, one of them still in California and the other at the Harvard Stem Cell Institute (HSCI) in Cambridge, began exchanging theories about why patients with leukemia stop producing healthy blood cells. What was it, they asked, that caused bone marrow to stop producing normal blood-producing cells?

And after almost a decade of bicoastal collaboration, Emmanuelle Passegué, now a professor in the Eli and Edythe Broad Center of Regeneration Medicine and Stem Cell Research at the University of California, San Francisco, and Amy Wagers, a professor in Harvard’s Department of Stem Cell and Regenerative Biology, have the answer.

They have found that cancer stem cells actively remodel the environment of the bone marrow, where blood cells are formed, so that it is hospitable only to diseased cells. This finding could influence the effectiveness of bone marrow transplants, currently the only cure for late-stage leukemia, but with a 25 percent success rate due to repopulation of residual cancer cells.

Their results, which were recently published online in Cell Stem Cell, show that leukemia cells cannot replicate in the bone marrow niche as well as healthy blood-forming stem cells can, so the cancer cells gain the advantage by triggering bone marrow-maintenance cells to deposit collagen and inflammatory proteins, leading to fibrosis — or scarring — of the bone marrow cavity.

“They remodel the microenvironment so that it is basically callous, kicking the normal stem cells out of the bone marrow and encouraging the production of even more leukemic cells,” Passegué said. This model is a shift from the widely held theory that cancer cells simply crowd out the healthy cells.

Passegué and Wagers stayed in touch, despite the distance between their laboratories, via annual, two-day, “off-the-record” symposiums of junior investigators at the Harvard Stem Cell Institute and the California Institute for Regenerative Medicine (CIRM). The meetings, which began in 2005 and have continued, require all registrants to keep presentations no longer than 15 minutes and only to discuss unpublished work. “It’s sort of Las Vegas rules,” Wagers said.

At the second such meeting, Passegué was intrigued by Wagers’ cell isolation-based approach to studying the bone marrow niche, the environment where stem cells are found. In the ensuing years, the two scientists swapped protocols, chemical reagents, mice, and even postdoctoral researchers in the pursuit of discovering what causes healthy blood cell dysfunction in leukemia. “Wagers was really involved as a creative spirit in the development of this story,” Passegué said.

The observation that leukemia cells can remodel the bone marrow niche parallels work done by HSCI co-director David Scadden of the Harvard-affiliated Massachusetts General Hospital, who demonstrated that particular genetic modifications of bone-forming cells initiate changes in the marrow cavity that suppress normal blood formation and promote the emergence of leukemic cells. “So there’s this bidirectional communication that’s self-reinforcing, “Wagers said. “And if there’s a communication loop like that, you can think about interrupting in many different ways.”

Passegué wants to understand how bone-marrow support cells are manipulated to sustain leukemia cells, instead of normal blood cells, in order to design therapies that block these detrimental changes. In the short term, her work could explain why 75 percent of bone marrow transplants are unsuccessful. “A poor niche is likely a very important contributing factor for failure to engraft,” she said. Her lab has shown that fibrotic bone marrow conditions can be reversed in as little as a few months by removing the bad-acting maintenance cells, and she is now investigating how to restore the healthy bone marrow environment in leukemia patients.

Passegué and Wagers believe the success of this research reflects the value of scientific partnerships. “Both HSCI and CIRM understand the importance of fostering the open communication and collaboration that drives innovation in science,” Wagers said. The 2013 HSCI/California Junior Faculty Symposium will take place Nov. 8 and 9 at the University of California, Los Angeles.

Koen Schepers, now at the University Medical Center Utrecht, was the first author on this study. The work was supported by the National Institutes of Health, CIRM, a NWO Rubicon Fellowship, and a KWF Fellowship.