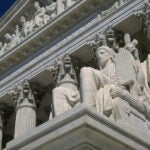 The U.S. Supreme Court handed down a pair of landmark decisions Wednesday, effectively giving the gay rights movement critical victories in its fight for marriage equality. The court ruled the 1996 federal Defense of Marriage Act (DOMA) unconstitutional, thereby allowing same-sex, married couples equal access to federal benefits. It also ruled that California’s ban on such marriage, known as Proposition 8, had no legal standing to appear before the Supreme Court. The decision essentially paves the way for legal same-sex marriage in that state.

But even before this historic moment, it was clear that the court of public opinion was already shifting on the issue.

Four years ago, polls suggested that about 40 percent of the American public favored gay marriage. Today, those figures are above 50 percent. According to a Pew Research Center poll conducted last month, 72 percent of Americans viewed legal recognition of same-sex marriage as “inevitable.” A recent New York Times/NBC survey found that 56 percent of Americans supported the equal treatment of same-sex couples already married. The same survey said 60 percent favored letting the decision to legalize gay marriage rest with the states, not the federal government. And increasingly, states are accepting same-sex marriage. In the few months since the high court heard oral arguments in these cases, three more states have legalized it, bringing the total to 12 plus the District of Columbia. Marriage equality is also gaining ground internationally. Since March, Uruguay, New Zealand, and France have joined 11 other countries that support it.

Following are some perspectives, first on the high court’s rulings, and second on the shifting national stance on gay marriage:

“It’s obviously a great vindication for same-sex couples, who have fought for so very long to secure the right to marry,” said Marshall of the U.S Supreme Court’s rulings. “Of course, it doesn’t make same-gender marriage a right in every state, but it does make an enormous difference for those couples who are married in states that do permit same-sex marriage.”

The national public shift toward supporting gay marriage, she added, has been remarkably swift.

“The Goodridge decision was in October 2003, and here we are 10 years later with many states having recognized same-sex marriage and the U.S. Supreme Court making a very strong statement about same-sex marriage, in contrast to the example on interracial marriages, which people forget were outlawed by many, many states. The decision of the California Supreme Court, which led the way on that, was in 1948, and it wasn’t until 1964 that the issue was finally resolved … by the U.S. Supreme Court.”

Constitutional scholar Kenji Yoshino ’91, a law professor at New York University School of Law and a member of the Harvard Board of Overseers, said the rulings constituted “an epochal step forward for gay rights.”

The ruling on the DOMA case, he said, set a strong precedent for the court because it produced a majority opinion based on the Equal Protection Clause of the U.S. Constitution.

“Some court-watchers predicted a fractured court that would not produce a majority opinion,” Yoshino said. “Justice [Anthony] Kennedy seemed more favorably disposed to a federalism argument — that is, the argument that marriage was a state domain into which Congress should not intrude.”

The court’s four more liberal justices, in contrast, seemed to incline toward the argument that same-sex couples were being treated unequally. “As it turned out,” Yoshino said, “Justice Kennedy wrote for a square five-member majority behind the equality principle, even though his analysis articulated federalism concerns.”

This result, he added, means that this case is more likely to serve as the foundation for striking down state restrictions on same-sex marriage in the future.

Many experts say the political landscape is changing to reflect the national trend. While few Republicans have openly supported gay marriage, there has been notable movement in the U.S. Senate. Three GOP senators have voiced their support in recent months, including Sen. Rob Portman of Ohio, who reversed his position on the issue after his son came out to him.

Earlier this year, more than 100 prominent Republicans signed a legal brief backing gay marriage, in support of a lawsuit before the court that aims to strike down Proposition 8, California’s ban on same-sex marriage.

According to Trey Grayson, director of Harvard’s Institute of Politics, the Republican Party recognizes it has to do a better job of attracting younger and more diverse members. A possible shift on its gay marriage stance — despite the Republican National Committee’s recent vote to affirm its commitment to defining marriage as the union of one man and one woman — may be part of the solution.

“Over the years, our surveys have shown a pretty high percentage of millennials, 18- to 29-year-olds, are comfortable with same-sex relationships … Some of the hesitation that you hear sometimes from younger voters with wanting to embrace the Republican Party is this particular issue. It’s not abortion … this is one where there’s a clear break,” said Grayson.

In addition to younger voters, the libertarian element in the Republican Party, which typically favors “letting individuals do what they want,” is also in play, said Grayson, as is the attitude of major Republican donors and consultants who tend to look more favorably on gay marriage.

“Republicans, in order to win more elections in the future, have to be more open,” Grayson said. “This strikes me as having an inexorable march,” he added. “I think it will, over time, change.”

But perhaps a bigger change in opinion has played out on the Democratic side of the aisle. President Obama, a longtime supporter of civil unions, said his position “evolved” over time. Last year he declared his support for same-sex marriage, and in his 2013 inaugural address made a historic reference to gay rights. “Our journey is not complete until our gay brothers and sisters are treated like anyone else under the law,” Obama said then. “For if we are truly created equal, then surely the love we commit to one another must be equal as well.”

Harvard’s Theda Skocpol, the Victor S. Thomas Professor of Government and Sociology, said the reasons behind Obama’s change of mind were likely both personal and political.

“He knew someone personally is what he said, but he was also pointing to a reason that surely his pollsters told him was driving a lot of change of opinion in the larger population,” said Skocpol, adding that Obama’s backing has likely meant more support on the issue within the Democratic ranks. “The Democrats in Congress all say they are evolving. I think some of them were planning to evolve for several years, but since Obama moved, they’ve evolved in just a few months.”

The argument that same-sex marriage weakens marriage as a vehicle for raising children doesn’t hold true for Skocpol, who pointed to both the large number of gay couples eager to start families and the decline in marriage more generally as contrasts.

“The horse has been out of the barn on the weakening of marriage since the ’70s. People get divorces … people are even getting divorced into old age. Not all married people have children, and in fact large numbers of women have children without marriage.

“There is a sort of arc in American history, that in some ways has gotten stronger in the last half century, towards saying ‘Each person should be able to pursue happiness in their own way.’ I remember seeing a woman carrying a sign at the Supreme Court saying ‘Gays should have the right to be as miserable in their marriage as I am.’”

The history of the debate

While marriage equality has become a central component of the modern gay rights agenda, debates about marriage and families date back to the founding of the gay liberation movement in the late 1960s and ’70s, according to Harvard’s Timothy McCarthy.

“For many years, the idea of the viability of this as a political movement was something that was a pipedream — for even the people who really wanted it,” said McCarthy, a lecturer on history, literature, and public policy.

Over the years, other issues took precedence in the movement, including employment nondiscrimination and the drive to increase funding and support for AIDS research, prevention, and health care. When President Bill Clinton signed the Defense of Marriage Act into law in 1996, the movement was inspired by to develop a different political strategy, with marriage equality as one of its central goals.

“I like to tell people Bill Clinton loved us and left us, and Barack Obama wanted to date us a little while longer before making a commitment,” said McCarthy. “And I think that has played out politically. When it comes to gay rights, Obama has been much better, not only than Clinton, but than any other president in the history of the country. So that has opened up, I think, an interesting space.”

Much of that space has been filled by an increasing number of heterosexual allies. McCarthy called that kind of support, when viewed alongside other major American social movements, “remarkable.” During the crucible of the Civil Rights Movement, the majority of “white people didn’t come out in support of rights for African-Americans,” he said. “Likewise, men didn’t back women in any significant numbers during the women’s movement, and capitalists never really favored union rights during the height of the labor movement.

“This is a really interesting and I think largely unique moment in American history, where you have a social movement that is on the march and on the move, that is drawing into its ranks an army of straight allies who are willing to be out there, at least insofar as their support for marriage equality is concerned.”

And while he agrees that much of the support has to do with the fact that more and more people know someone, either a family member or close friend, who is gay, it has just as much to do with something of a perfect cultural storm: the repeal of the “Don’t Ask, Don’t Tell” policy addressing gays in the military, the increased awareness of bullying and ensuing anti-bullying campaigns, and the marriage equality movement.

“It’s about children, the military, and marriage,” said McCarthy, who is also a program director at the Harvard Kenney School’s Carr Center for Human Rights Policy. “We value all three, and we have been able to insert ourselves into these three arenas, and have then invited straight allies to be with us. By demanding our right to fight in the military, get married, and protect our children, we have become more legible to straight people who otherwise would not necessarily be on board with our struggle.”