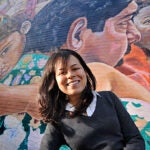 For Patrick Harlan, the path to success as a comedian in Japan ran through an unexpected place: Harvard College.

Harlan’s road to television screens across Japan started in 1993, when he ditched the Harvard Glee Club’s flight home after a post-graduation trip to Asia. His decision to crash instead with a friend in Japan who had both a job and an apartment led to fame for Harlan, first as part of the comedy duo Pakkun Makkun, and then to his current television career.

Harlan, who was in Cambridge for his 20th reunion, sat down with Gazette staff writer Alvin Powell to talk about his unorthodox path and about the similarities and differences between comedy in Japan and in the United States. He also shared his advice for smart, funny, ambitious members of the Class of 2013 who might want to test Japan’s comedy scene: Stay home.

GAZETTE: How does a Harvard senior from Colorado wind up a well-known comedian in Japan?

It was not a plan. I chose to go to Japan because I graduated with a degree in comparative religion and — I didn’t know this at the time — but there are no professional religion comparers out there. It’s not something you can do for money, comparing religions. I studied it because I was interested in it, but there wasn’t a whole lot of cash there.

So I worked [teaching English] in order to get a reasonably marketable skill — Japanese — and also because I thought the Japanese economy was booming. Apparently that was a bubble, and apparently it burst the day I got off the plane.

I studied Japanese for a year and taught English, and I was planning on coming back after a year. But … I wasn’t really done with my studies, so I decided to go another year. After two years, I figured if I left Japan I would have given up all I’d invested. So I tried my luck in the Japanese show business industry.

In 1996, when I moved to Tokyo, the plan was to wash out, to fail, and come home. And that plan didn’t work out. I failed in failing.

GAZETTE: What did you do here at Harvard that prepared you for a career in comedy?

HARLAN: I was in Glee Club Lite, one of the a capella groups. And between the songs in the jams, we’d do sketches, short comedy skits, and I ended up writing all those for Glee Club Lite. That was one thing.

But also, just hanging out with Harvard undergrads is a funny experience in itself. The conversation is really stimulating and, looking back on it, largely comedic.

For example, you say something to a Harvard undergrad, something like, “Nice day today.” And they’ll say, “Do you really think so?” And you have to sort of prove your point that it’s a nice day.

GAZETTE: Is comedy in Japan similar to comedy here?

HARLAN: There’s a graduate student or maybe a professor at the University of Colorado who studies comedy across borders, and he actually interviewed me a couple months ago and wrote a piece about it. And his assertion is that comedy around the world rests on this principle of benign violation: violations of assumptions, violations of cultural mores, doing something unexpected, but harmless.

So you have to have this common knowledge that what’s going on is not actually dangerous, but it has to be a violation of normal. I think that is a pretty good thesis. In that sense, Japanese and American comedy culture is similar.

But the things you deal with, the subject matter, is very different. Here in America, comedy is largely potty humor and political humor, the two Ps, so sex and politics. Obviously, the pinnacle of American comedy was the Clinton administration, when you had both sex and politics in this beautiful symbiosis.  In Japan, you can’t really deal with either of those, at least not if you want to do it on TV.

Comedy over there is much more about common, everyday situations, which are distorted by the character or the storyline. A very common setting in Japanese comedy might be the new kid at school or the taxi driver. A very common short skit might be, since we’re in a coffee shop [conducting an interview]:

“So, do you want something to drink?”

“Sure, I’ll have whatever you’re having.”

“Okay, two coffees for me too.”

That’s a common situation, a violation of the assumption that everyone understands — two coffees means one for me and one for you. It’s not hilarious, but it works all right.

GAZETTE: What’s different in Harvard Square from the last time you were here?

HARLAN: I’ve only been here about 15 hours, but the sandwich shop is gone, that’s a bummer. Ellie’s … Elsie’s! Other than that, it seems a little smaller, like going back to the elementary school. And the teachers aren’t as old as I expected. All the professors seem kind of youngish … Professors should be older.

GAZETTE: What are you doing now?

HARLAN: I host a show, mostly for housewives in the morning on TV Tokyo, Monday through Thursday. I comment on the news, which is a recent development, just in the last couple of years.

HARLAN: It’s great. I’m a comedian, so they have a very low bar … The shows are serious. I make serious comments, and just a very small violation is funny in that setting.

GAZETTE: Tell me about the Glee Club trip that got you to Japan in the first place. That must have been quite a trip.

HARLAN: In 1993? We went over in August. We did 17 concerts in 14 cities around the country. And then I guess two in South Korea and one in Taiwan. And when the Glee Club flew back from Korea to America, I said goodbye and flew back to Japan.

So if it weren’t for the Harvard Glee Club and the very generous donations by my predecessors to buy my plane ticket, I wouldn’t have made it to Japan.

GAZETTE: It was the summer after Commencement?

HARLAN: Immediately after, August of ’93.  I was co-president of the Glee Club. And actually, I studied my first Japanese on the flight over. I … did some of the song introductions in Japanese for the concerts, and I told jokes, so that was the launch of my Japanese comedy career.

GAZETTE: So you learned enough Japanese on the plane to tell jokes?

HARLAN: I learned pronunciation, and I got the guys who actually spoke Japanese in the Glee Club to help me with the set. So I’d think of a joke, and they’d translate it, and I’d say it. People would laugh, but I’m not sure if they were laughing with me or at me. I’m still not sure.

GAZETTE: What was it about Japan that so captivated you?

HARLAN: I had a friend there, a friend who went to William and Mary actually, and who … had a job and an apartment, so I had a place to stay. That was pretty much the deciding factor.

GAZETTE: Did you have other job opportunities lined up after graduation?

HARLAN: No. That was the other deciding factor, the lack of choices. But I was planning on washing out and maybe going to another country, continuing the journey. And Japan worked out pretty well.

GAZETTE: Do you have any advice for graduating seniors who might want to go into comedy or show biz?

HARLAN: Don’t come to Japan. I don’t need any rivals.

My advice is to find something you really like to do, and do it. It’ll work out. It’s worked out for my roommates. They do random things around the world. It’s worked out for my other Harvard friends and actually my friends from Colorado who went to [other] universities or didn’t go to a university. As long as you find a job you like, it works out.

I’ve been very happy, largely because I enjoy what I do. I get to do something different every day, and that really fits my personality. And I like learning and being in Japan. This is maybe a good piece of advice: If you like learning, go away.

Every person in Japan speaks Japanese better than I do, and I’ve been there 20 years. That is exciting, stimulating. It’s a challenge. And if you like a challenge, then go someplace you don’t know.