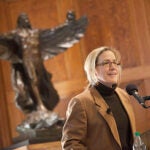 Civil Rights icon suggests religion has a place in schools

The honor, said McCartney, is given to those who have had a “transformative effect on the education sector.” In addition to his groundbreaking Civil Rights work, Meredith has committed his life to improving public education, having become a “passionate advocate” for initiatives such as evidence-based reform, the expansion of early childhood education programs, and supporting teachers who work in the nation’s poorest public schools.

Meredith’s attire, a bright red University of Mississippi shirt and hat, offered the audience a clue to his famous past. In 1962 he entered the university as its first African-American student. Initially rejected by “Ole Miss,” Meredith had filed a lawsuit against the school, claiming he had been discriminated against on account of his race. The U.S. Supreme Court eventually heard the case and ruled that Meredith should be allowed to attend. But a riot greeted his arrival, and thousands of U.S. troops and federal marshals had to be called in to help get him to class.

Two years after he graduated, a sniper shot Meredith in 1966 as he began a solitary Civil Rights march in the South to encourage voter registration by African-Americans. He recovered and later rejoined the march, which in his absence had been taken up by other Civil Rights leaders, including Martin Luther King Jr.

During a wide-ranging speech on May 29 that touched on his upbringing, his time at Columbia University studying law, and the turbulent Civil Rights Movement, Meredith said that a problem with public education “is that the kingdom of God has been removed from the process.”

His argument received a muted reception, but he remarked simply that the number of people who didn’t applaud in response to his statement was more telling than the number of those who did.

He expanded on his theme, arguing that the teachings of Christ are instrumental and should be looked to when trying to solve some of the problems in the nation’s failing public school system. Christ, said Meredith, taught that people should love others as they love themselves. It’s the golden rule that could and should apply in the reworking of the nation’s school system with an eye toward equality, he said; in other words, “Do unto others, as you would have them do unto you.”