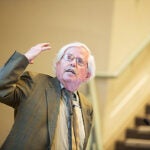 Did a shift in the way infants were weaned give early humans an evolutionary advantage over their Neanderthal cousins? Scientists have long speculated that a change to earlier weaning played a key role in human development, but they have been stymied in efforts to prove such theories by the lack of an accurate record for comparing weaning ages in both species.

Now, Harvard scientists say they’ve discovered such a record, and that it was right in front of researchers all along — in teeth.

Tanya Smith, an associate professor of human evolutionary biology, and Katie Hinde, an assistant professor of human evolutionary biology, worked with colleagues at the Icahn School of Medicine at Mount Sinai in New York and Westmead Hospital in Australia to demonstrate that the levels of barium in teeth correspond with increases in breast-feeding, and fall as infants are weaned. Importantly, the researchers say, the barium levels survive in fossils that are thousands of years old, meaning the test can show how breast-feeding behavior changed among Neanderthals and early humans. The work was described in a paper published May 22 in Nature.

“There’s an ongoing debate about whether Neanderthal and contemporary Homo sapiens would have practiced different behaviors in terms of their breast-feeding,” Smith said. “People have speculated that an early weaning process in modern humans may have been part of their evolutionary advantage. We don’t have the data to answer that question yet, but we now have the method to be able to start collecting that data.

“It’s clear that there are developmental differences between Neanderthals and modern humans — we’ve amassed good evidence for that in the fossil record,” she continued. “What we haven’t been able to do is make a direct comparison using a biomarker like first reproduction age, or life span, or weaning age. That’s why this is so exciting, because now we can get at one of these ‘life history’ variables directly.”

To get at weaning age, researchers took advantage of the unique way teeth grow.

Like trees, teeth grow in regular layers that are created as various minerals — such as calcium — oxygen, and small amounts of metals are deposited in tooth enamel and dentine. Using sophisticated analytical chemistry and microscopic records of daily growth, researchers were able to show that while barium levels in teeth are initially low because very little of the metal passes through the placenta, levels increase dramatically as breast-feeding begins, then fall off as infants begin to supplement their diet with other foods.

To show that barium levels correlate with breast-feeding, researchers first analyzed data from humans and monkeys who had known dietary histories.

As part of a study conducted by the University of California at Berkeley’s Center for the Health Assessment of Mothers and Children of Salinas, participants provided naturally shed baby teeth along with precise records of infant diet, including the duration of breast-feeding and timing of formula introduction. Macaque teeth, milk, and dietary histories were provided through a long-term lactation study conducted by Harvard’s Comparative Lactation Lab and the California National Primate Research Center. Researchers also analyzed the first molar tooth of a juvenile Neanderthal from Belgium to assess weaning patterns in a Middle Paleolithic hominin.

“We can see when the barium shows up in the tooth after birth, and we see it increase over time, because an infant will take more milk as they get bigger and more active, and then you see it drop off in this beautiful, inverted U-shaped function,” Hinde said. “This is a game-changer in many ways, because this will allow us to go to museum collections and look at this as a proxy for how much milk different infants got from their mothers and what their weaning process was like. We can now look at that within species, but we can also look at that among species.  That will tell us about the evolution of how mothers invest in their young.”

The potential for important insights doesn’t end there.

“There’s also a human health component to this,” Smith said. “People intuitively understand that breast-feeding is important for normal development. We can use this data to study the breast-feeding histories of adults and that could predict later health outcomes.”

Perhaps most importantly, she said, the technique will allow scientists to begin to answer questions of how changes in lifestyle may have contributed to modern humans’ evolutionary advantage over Neanderthals.

“This can give us a window into one aspect of life that may have separated modern humans from Neanderthals,” she said. “This topic has been debated for a long time in the scientific community. What does it mean that human and Neanderthal cranial development was different? What does it mean that their dental development was different? We haven’t been able to get at these questions in the fossil record, but now we can actually get at a real developmental benchmark. That’s why this is so exciting.”