Healthy menus for people and planet 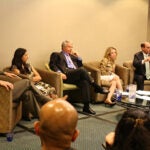 When it comes to human dietary health, less red meat is better. And when it comes to environmental health, a chicken looks more like a nut than a cow.

That was a portion of the presentation by Harvard health experts to restaurateurs, chefs, and food industry leaders during a three-day leadership summit at the Charles Hotel in Cambridge.

The advice, in this case from Walter Willett, chair of the Nutrition Department at the Harvard School of Public Health (HSPH) and the Frederick John Stare Professor of Epidemiology and Nutrition, was part of a larger meeting of the minds involving leaders in the food industry, nutrition experts, and authorities on environmental sustainability that aimed to provide guidance in designing menus across America.

The event, called “Menus of Change: The Business of Healthy, Sustainable, Delicious Food Choices,” was co-sponsored by the Nutrition Department and the Culinary Institute of America. It featured a broad spectrum of speakers on topics including health, sustainability, portion sizes, menu trends, sugar-sweetened beverages, chefs as leaders of change, technology and innovation, and changing demographics and consumer demands.

The event also featured the release of the Menus of Change 2013 Annual Report, which provided an update on how the industry is doing in 13 key areas — scoring better in some than in others, but not great in any — as well as 24 principles that can guide chefs in designing healthier, more environmentally sustainable menus.

Greg Drescher, vice president of strategic initiatives and industry leadership at the Culinary Institute of America, a New York-based college, said the annual report was the result of more than a year’s work and aims to provide useful advice to people devising menus amid conflicting health claims and food fads. The report also takes into account the realities of the food industry, including economic concerns and consumer preferences and values.

The cooperation of chefs across America is increasingly important to the nation’s health. Arlin Wasserman, founder of Changing Tastes, a consulting group to Fortune 100 food companies, said Americans now spend 60 cents of each dollar eating out and buying prepared foods, rather than buying ingredients to prepare meals at home.

In discussing the science behind the report, Willett said that although the obesity epidemic continues, there is some good news. The American diet, he said, has improved over the last decade, albeit slightly. Half of the increase has been from an 80 percent reduction in the use of unhealthy trans-fats.

Studies also show that the dietary improvement has been much greater among those in higher-income groups, Willett said, an indication that efforts must increase to reach America’s disadvantaged.

“I find this encouraging that we are improving the U.S. diet, but everyone does need to redouble their efforts,” Willett said.

With an eye toward human-induced climate change, Willett showed an analysis of the greenhouse gas production required to produce different foods. Beef and lamb were the highest, producing 10 times the greenhouse gases used by the lowest-producing foods, beans and nuts. When looking at protein sources, Willett said that greenhouse gas production per pound of protein is related to how long an animal lives before it is slaughtered. The difference between a cow, which lives two to four years, and a chicken, whose life span from egg to slaughter is just weeks, makes chicken, from a greenhouse gas standpoint, more like a nut than a cow.

The lesson, Willett said, is that in making menu choices, the healthy option and the environmentally sustainable one are often the same. One area of tension, he said, is in seafood. Nutritional experts recommend increasing the amount of fish in the diet at a time when many wild stocks are overfished, and some are collapsing. The answer, Willett said, may be to devise environmentally friendly methods to raise fish through aquaculture.

“The basic choice of foods has a huge impact on the environment,” Willett said. “Replacing red meat with almost anything will improve” diet and the environment. “I think that’s a clear message for those designing menus.”

Simon Marshall, president of Unilever Food Solutions North America, which makes Lipton teas, Hellmann’s mayonnaise, and Knorr soups, said the company is happy to be part of the Menus of Change initiative and outlined several steps it is taking to improve its operations. Whether the driving force is obesity or environmental degradation, it’s clear to those in the food industry that change is on the way, he said. If the whole world were to live at European standards, sustaining it would take three planet Earths. If the world lived at American standards, it would take four.

“No change is no longer an option,” Marshall said. “Momentum for change is building.”