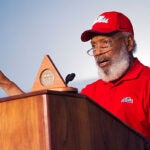 In a surprising move, the U.S. Supreme Court on Monday sent the question of affirmative action in college admissions back to the lower courts for reconsideration, in a case that examined how the University of Texas used race in its undergraduate admissions policy.

Associate Justice Anthony M. Kennedy, writing for the majority opinion in the 7-1 decision, ruled that “The district court and court of appeals confined the strict scrutiny inquiry in too narrow a way by deferring to the university’s good faith in its use of racial classifications … Fairness to the litigants and the courts that heard the case requires that it be remanded so that the admissions process can be considered and judged under a correct analysis.”

Last year, Harvard University joined 13 other colleges in filing a brief of amicus curiae, or friend of the court, supporting the practice of race-conscious admissions policies. In the 39-page document, the signatories urged the court “to continue to allow educational institutions to structure admissions programs that take account of race and ethnicity as single factors within a highly individualized, holistic review process.”

“We are heartened that the Supreme Court today has affirmed the vital interest of universities in bringing together students from many different backgrounds and points of view,” Harvard President Drew Faust said following Monday’s decision. “Such diversity enriches the learning experience for all our students, as they live and learn in a community whose collective variety of experiences, interests, and perspectives opens minds, expands horizons, and better prepares students to live and serve in a pluralistic world.

“As Justice [Lewis] Powell recognized in his landmark Bakke opinion in 1978, cited by the court today, Harvard has long exemplified a carefully tailored approach to admissions, one in which race or ethnicity may be taken into account as one factor among many in assessing each applicant as an individual, as we aim to shape a student body whose diversity along many dimensions contributes to the education of all,” Faust added. “We will continue working to achieve the essential educational benefits of diversity in ways that honor both the principles of law and the values of inclusion and opportunity central to the ideals of the university.”

In the Bakke case, the high court ruled that affirmative action was constitutional but invalidated the use of strict racial quotas in admissions.

Monday’s ruling, with only Associate Justice Ruth Bader Ginsburg dissenting, surprised many analysts who had expected the court to limit strictly the use of race-based aspects in admissions.

“The court has not called into question that compelling interest in the educational benefits of diversity,” said Harvard Law School Professor Tomiko Brown-Nagin. “Rather, what it’s done here is to say that the federal courts have a robust role to play in scrutinizing whether the universities really are implementing the court’s rulings in a proper way.

“The court is indicating here that it really wants the details to be worked out in the lower courts,” she said.

The suit had been filed by Abigail Fisher, a white student who said she had been denied admission by the University of Texas in favor of less-qualified minority students. Fisher’s lawyers challenged the constitutionality of the university’s race-based admissions practices, arguing that it was a breach of the 14th Amendment’s Equal Protection clause.

Fisher was the first such case argued before the high court since Grutter v. Bollinger, a 2003 decision in which the justices upheld race-conscious policies by a 5-4 vote. In that ruling, the court upheld the use of affirmative action, finding diversity in higher education a compelling government interest.