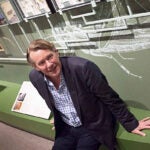 Sam Perez is searching for mutants. But to find them, he has to know what normal looks like.

Perez was among a dozen top botany graduate students and postdoctoral fellows who took an intensive, two-week course in what may be a vanishing discipline, plant morphology, at the Arnold Arboretum this month.

The course, with funding from the National Science Foundation and the Arnold Arboretum, is modeled after intensive, high-level courses in marine science offered by the Woods Hole Oceanographic Institution in Massachusetts and in molecular biology at the Cold Spring Harbor Laboratory in New York, according to William Friedman, arboretum director and Arnold Professor of Organismic and Evolutionary Biology. The course is the first of what will become an annual summer offering in plant organismic biology at the Arboretum.

Plant morphology, which involves understanding the genesis of a plant’s entire shape and structure, has been taught less frequently in recent years, shouldered aside by the increased emphasis on genetics and understanding of how a plant’s DNA affects its growth and appearance.

“There aren’t that many places where the study of the whole organism is very prevalent. It’s not a big part of the curriculum,” Friedman said. “Zoology, botany, ichthyology, all the ‘-ologies’ have been on the ropes across the world, not just in the U.S.  And as faculty who used to study morphology and whole organisms were replaced by genomics people, we’ve lost the ability to connect genes back to the biology of the organisms themselves.”

The dazzling diversity of flowering plants poses a special problem for budding botanists, since particular flower parts, for example, can look quite different in one species than in another. In addition, the use of a very few specific plants as laboratory models — akin to lab rats or fruit flies — has focused what morphological teaching there is on just a handful of species.

Young scientists like Perez have become adept at using the powerful tools of genetics in their studies, but some are finding that their lack of knowledge of plant morphology hinders their work.

Perez, a Michigan State University doctoral student who graduated from Harvard College in 2011, is examining plant mutants, comparing their genomes with normal plants to discover which genes are responsible for the mutated trait to better understand the genetics of the normal trait. He’s finding, however, that to identify plants with mutations, he needs a better understanding of normal plant morphology.

The course, taught by Pamela Diggle, visiting professor of organismic and evolutionary biology from the University of Colorado, and Peter Endress, professor emeritus of the University of Zurich, was specifically designed to be an intensive experience for participants, Diggle said.

Students are picked up each day at 8 a.m. from their dormitory at Emmanuel College in Boston’s Longwood area, and are dropped off after 9 p.m. In between, they have three-hour lectures each morning, followed by lunch, and three hours of laboratory time each afternoon, with discussion sessions, special lectures, and dinner mixed in. Students also gain access to the Arboretum’s living collection of more than 15,000 plants spread over 281 acres.

The intensive atmosphere is needed to cover a large amount of ground, said Diggle, who teaches plant morphology at the University of Colorado.

“As fast as I can talk, that’s what I can cover,” Diggle said. “My feeling is this is a really fundamental area, a common denominator for people working in different areas. … As we’ve become more specialized in knowledge, the commonality of the organisms is missing, and I think science is suffering for it.”

Despite the heavy workload, participants aren’t shying away from adding more of their own. Though the course tries to give the students a general knowledge of plant morphology and is not focused on their specific research subjects, the students asked early on whether they could present their research to the group during lunch, one of the few breaks in the day.

“The students are extremely good, extremely motivated,” Endress said. “They work more than we expect.”

For Kelsey Galimba, a doctoral student from the University of Washington, the long hours haven’t been too much to handle. Like Perez, Galimba signed up after finding that gaps in her knowledge of plant morphology were affecting her research. “It’s not been nearly as hard as I thought it would be. I don’t know if it’s because we have a good group or because of the interesting material, but we’ve all been fine with the hours.”

The intensity provides not just an opportunity to cover a lot of ground, Diggle said, but also allows participants to bond, providing the seeds, hopefully, of an informal network that will be part of the lasting effects of the experience.

“My adviser said, ‘Josh, go to this because you don’t get instruction in plant morphology like this anyplace else,’” said Josh Strable, a doctoral student at Iowa State University. “If you’re accepted, it’ll be something you’ll take with you for the rest of your career.”