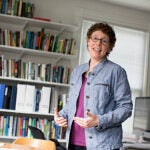 Up from the ruins, slowly

Surfer Mary Setterholm has wiped out in some gnarly waves during more than 40 years on the water. She has faced even tougher challenges on dry land.

The victim of clerical sexual abuse as a child who for a time was a teenaged prostitute, Setterholm will graduate from Harvard Divinity School (HDS) with a master’s degree and a plan to help others find their way back from the edge of despair.

Setterholm has temporarily slowed over the years by an occasional dangerous set of waves and a couple of nasty bike accidents. But her physical and emotional setbacks have helped her to develop a credo based on healing and forgiveness, along with a warrior’s resolve never to give up.

In surfing, as in life, said Setterholm, “you have to have resiliency skills, and know how to bounce back. You have to grab your board, get on it, and get back out there.” Her time at Harvard, she said, is “more than a bounce back; this is a punch back. I am so glad I am here around this sensibility.”

The Southern California native was a natural on a surfboard. She won the U.S. National Surfing Championship at age 17. But her life away from the ocean was troubled. She married young and had five children. The union was rocky and abusive. Once divorced, she returned to prostitution as a kind of way to take back some control.

“At the time I reasoned that prostitution was a more honest arrangement than being in denial about a bad marriage lacking authentic intimacy,” she said. “I was a wild woman on the outside with a hurting child inside; my solutions were reckless — and God was always bailing me out, always waiting for me to slow down.”

She also used the ocean to reclaim her life. Along with her accomplishments on the water, Setterholm was a fierce advocate for women in the traditionally male-dominated sport. She helped to create the Women’s International Surfing Association in 1974. Years later she founded a successful surf school in Southern California, where she helped women (and men), and weekly busloads of inner-city youth, feel comfortable in the surf.

Then one day, she encountered a homeless woman yelling at students in a restroom on the beach.

“I went in ready to do whatever I had to,” said Setterholm, who was prepared to drag the angry woman out. Instead, she found herself gently saying: “Let me help you.”

Soon, advocacy for the homeless and the poor became her second full-time job.

In 2003, a meeting with an inspiring nun named Sheila McNiff helped Setterholm to confront the abuse she had suffered as a child at the hands of clergy, and guide her back to education. She graduated with a theology degree from Loyola Marymount University in spring 2009, then headed to New York’s Union Theological Seminary before transferring to Harvard in 2010.

“I knew I had to salmon ‘up-river’ with my stories and my understanding and just be present. I found hearts of gold here.”

The encounter with McNiff helped crystallize something else for Setterholm.

“She did more to form my ministry ethos than anybody when she said, ‘Where can I meet you?’ It made me realize that in advocacy work, you go to them, it’s not the other way around.”

While at HDS, Setterholm made weekly trips to Rosie’s Place, a women’s shelter in Boston, where she used her teachings from Serenity Sisters, the support group she created for exploited women and recovering prostitutes. She also received the School’s Hopkins Shareholder Award, which recognizes ministerial promise.

Setterholm plans to open her own women’s center after graduation with help from a grant from Memorial Church, but it may have to wait just a bit. She hopes to enter a Ph.D. program first, expanding on her HDS thesis work, which explored the way prostitutes have been used in religious teachings as a stand-in for deviant or disbelieving members of society.

“I think God has bigger plans than what I’ve imagined,” said Setterholm. “I could never have imagined making it this far, or to Harvard. God’s imagination is far wilder than mine.”