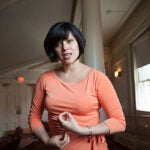 He grew up poor in Prague, but departs as a Harvard grad, with dreams ahead

Among the guests at Commencement this year will be Miroslava Jelinkova, a single mother from Prague who every day has felt the crush of poverty. Despite two decades of adversity, she raised four sons into manhood. Jirka Jelinek ’13, her second youngest, graduates from Harvard College today. (“It’s partly her accomplishment,” he said.)

Marie Rybova will be at Commencement too, a 79-year-old woman who loves Elvis Presley and remembers fondly the day that Americans liberated her town from the Germans in World War II. She is Jelinek’s maternal grandmother and owns the country house two hours south of Prague where he spent his holidays as a boy. Jelinek tended the garden, cooked, and scoured a nearby forest for mushrooms and blueberries — country influences, he said, that outmatched the jaunts his wealthier high school friends took to Greece, Italy, and Morocco.

Jelinkova and Rybova represent the riches of human capital and cultural diversity that Harvard seeks from around the world — often thanks to the University reaching out to applicants in financial straits. “I’ve always been a 100-percenter here,” said Jelinek of his aid package, “for which I am eternally grateful.”

Getting into Harvard was a matter of luck and aid, said Jelinek, but it was also a matter of personal agency. “I worked really hard,” he said. That work ethic had sped him through eight years at Johannes Kepler Gymnasium, a rigorous public school in Prague, where students study a dozen subjects a year.

His academic achievement and personable style won Jelinek a high school semester at Oundle School in the United Kingdom. That stay sharpened his appetite for English-language universities. In his senior year, Jelinek applied to the University of Oxford and to a dozen American colleges. When the welcoming email from faraway Harvard arrived, it was a turning point in his life that contained both excitement and mystery. “You know something big happened,” he recalled, “but you don’t know what that is.”

During four years at Harvard, that “something big” added up to something busy, heartfelt, and international. Every August, Jelinek volunteered to orient freshmen arriving from other countries, a reminder of the awe and confusion he felt when he first walked into Harvard Yard, carrying one suitcase.

He also worked one or two jobs a semester, in part to send money to his mother. Jelinek graduates with a concentration in government, a minor in ethnic studies, and a French language certificate. This fall he will start a dual-degree program in international studies at Columbia University and Sciences Po in Paris.

Behind his accomplishments was a boyhood that thrust him into independence early. His mother would say, “Go figure it out on your own.” His father forced Jelinek and his brothers into another sort of independence. He left the family early on, declined to pay alimony, and was later imprisoned for bad debts. “We all handled it differently,” said Jelinek, who still feels guilt for being at Harvard while his mother scraped by in Prague, food shopping with coupons “thing by thing.”

As a boy, while his schoolmates traveled widely, Jelinek traveled the 70 miles to his grandmother’s house in rural Blatná. That whetted his appetite to visit places far away. At Harvard, he won competitive grants to summer in Ghana and Haiti, and to study in South Africa for a semester. His time in Haiti deepened a friendship with former Prime Minister Michèle Pierre-Louis, a onetime Institute of Politics fellow. (Jelinek was her student assistant.) She will attend Commencement as his guest.

But the most important trip that Jelinek took at Harvard came as a freshman, a journey of a few steps to meet the love of his life, Marjorie Lacombe ’13, a Haitian-American pre-med psychology concentrator. Of his constant companion, Jelinek said, “I could not imagine Harvard without her.”