Talent on the sidelines 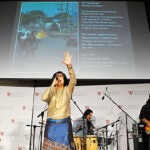 The price of women’s immigration

Every year on May 1, high-achieving high school seniors around the country face the final deadline for college commitment. For many middle- and upper-middle-class students, the date marks the end of standardized-test taking, application essay writing, campus visits, and financial aid planning — the complex process otherwise known as the college admissions game.

This spring, the conversation about the ever-more-fraught competition for a spot in one of America’s top universities has shifted to an often-overlooked group, thanks to research by Christopher Avery, Roy E. Larsen Professor of Public Policy and Management at Harvard Kennedy School (HKS). If admission to elite colleges is a game, Avery and his longtime colleague Caroline Hoxby found, it’s one that low-income students with high potential are too often sitting out.

In a National Bureau of Economic Research paper presented in March, Avery and Hoxby, an economist at Stanford University, reported that promising but poor high school students (those who scored in the top 10 percent among SAT takers and whose families make $41,472 a year or less) often do not apply to any selective universities — despite the fact that those colleges, on average, would be more affordable than less-selective schools thanks to their robust financial aid policies.

“These low-income students’ application behavior differs greatly from that of their high-income counterparts who have similar achievement,” they wrote. “The latter group generally follows the advice to apply to a few ‘par’ colleges, a few ‘reach’ colleges, and a couple of ‘safety’ schools.”

The paper spurred a wave of media coverage, much of it critical of the selective colleges Avery and Hoxby studied. If poor students weren’t applying to good schools, the logic went, then it must be the fault of those colleges for not trying hard enough to attract them. In some corners, their work was taken as a sign that the country’s higher education system was broken, or as evidence that growing wealth inequality was stifling opportunity for young people at the bottom of the economic ladder.

“I can see why some people take the paper that way, but I don’t see it that way,” Avery said. “We know the colleges are trying really hard to attract these students, but they’re facing a problem that is systematically very challenging. This problem is too large for a handful of selective colleges to solve on their own.”

High-achieving, low-income students often live far from major urban centers and from areas with high concentrations of colleges, such as the East Coast, he said. Colleges can still reach students through mailings, “but these students are getting piles and piles of brochures,” Avery said. “They may have heard of Harvard, but there are lots of other great colleges that they haven’t heard of, and they can’t distinguish within this pile where to apply.”

Compounding the issue, he said, is the fact that many of these students are the first in their families who plan to go to college. Without any insider knowledge of selective colleges from friends or family members, low-income, geographically isolated students often don’t know what their options are, Avery said — a theme that has appeared in his research on college admission over the past two decades.

Avery, who attended Harvard College and received his doctorate at Stanford, hadn’t intended to study higher education when he joined the HKS faculty in 1993.

“I was trained in game theory, which is about strategic interactions and incentives,” he said. “I realized the college admissions system had evolved into a situation where there was a lot of strategy involved.”

At HKS, Avery began working with a mid-career student, Andrew Fairbanks, whose interest in the economics of college admissions had been sparked by his time as an admissions officer at Wesleyan University. In 2003, with co-author Richard Zeckhauser, HKS’s Frank P. Ramsey Professor of Political Economy, Avery and Fairbanks published “The Early Admissions Game,” the first academic book to fully explore the growing practice of early admission.

After studying half a million applications to 14 elite colleges, the authors found, somewhat controversially, that applying early gave students a documentable advantage over peers who applied by “regular decision” deadlines.

“We were estimating that at a lot of the colleges we studied, applying early was the same as increasing your SAT score by 100 points,” Avery said. More important, he added, “was that experienced college counselors at private schools already knew this. In a sense, it wasn’t a level playing field.”

Since the book’s publication in 2004, many colleges have stepped up their efforts to recruit students from lower socioeconomic backgrounds by raising awareness of their early decision and financial aid programs. Harvard, with its Financial Aid Initiative, was at the forefront of the movement, Avery said.

Still, colleges and students alike have opportunities to boost the numbers, he said. Selective colleges that lack broad name recognition can tap alumni to reach out to high school students in isolated towns where admissions officers can’t afford to travel. Low-income students can request application fee waivers, allowing them to apply to several more colleges than they otherwise would and to then compare their financial aid packages.

“It’s like looking at a couple of houses,” Avery said. “You may need more than one option.”

Working with the Strategic Data Project at Harvard’s Center for Education Policy Research, Avery advises fellows who analyze data for some of the nation’s largest public school districts. Through the project, he has become more involved in tracking students of all achievement levels as they move from high school into college — or not.

“I now see that there are a lot of students who could go to good colleges but who don’t go to college at all,” he said. One of the Strategic Data Project’s goals, he said, is to help school districts track former students to see how many actually pursue higher education — instead of relying on self-reported plans — and to develop interventions to help graduating students follow through on their college goals.

Collaborating with researchers from across Harvard, from the Graduate School of Education (GSE) to the Economics Department, has broadened his work over the years, he said.

“There’s a growing community here of people who are really dedicated to these problems,” he said. “We’re trying to figure out what we as researchers can do to lower the barriers that have been keeping talented people from making it to college and graduating from college.”