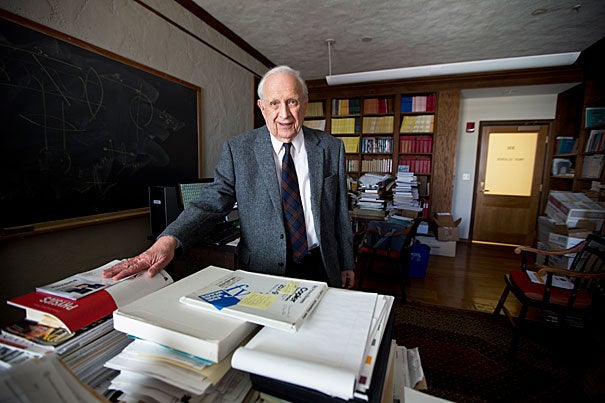 Chomsky, at HGSE, elaborates on Freire’s ‘Pedagogy of the Oppressed’

Noam Chomsky on Wednesday joined Bruno della Chiesa, a visiting lecturer at the Harvard Graduate School of Education (HGSE), in an Askwith Forum covering the legacy of the radical Brazilian educator Paulo Freire (1921-1997) and his 1968 book, “Pedagogy of the Oppressed.” The conversation was moderated by Professor Howard Gardner.

The book, said Chomsky, linguistics professor emeritus at the Massachusetts Institute of Technology, sought to overturn the educational status quo that Freire saw as “a banking system” in which teachers deposited knowledge into the passive brains of students. “The scope of action allowed to the students extends only as far as receiving, filing, and storing the deposits,” Freire wrote.

And not much has changed since, said Chomsky: “Teaching to test, that’s our education system.”

According to Chomsky, known for his outspoken politics, Freire viewed learning as a critical dialogue between teacher and students, with a shared goal of raising consciousness about oppression and social justice. Freirean education is meant to respect and include the oppressed, empowering them to seek social justice for themselves and others, Chomsky added.

Freire’s ideas are considered dangerous today, and largely ignored in the United States, because they question authority, Chomsky said. Freire’s book is “an instrument for consciousness-raising, which will lead to change in institutions,” he said, “so by U.S. standards, Freire is a radical revolutionary.”

Della Chiesa agreed. “The structure [of oppression] is still exactly the same, and it’s even become more efficient since” the publication of “Pedagogy,” he said.

The book is still controversial. In 2012, Arizona officials pulled it from the K-12 curriculum because it “repeatedly reference(s) white people as ‘oppressors’” in violation of state law.

Chomsky emphasized Freire’s philosophical connection with the “liberation theology” of the Catholic Church in Latin America, which Chomsky described as “dedicated to bringing the gospels back into Christianity” by helping the poor and oppressed realize social justice on earth. “Pedagogy” told the poor “you don’t have to be passive and oppressed, things can be changed,” Chomsky said.

Forced into exile in the mid-1960s, Freire spent years in Chile, and was at HGSE from 1969-1970. Repressive Latin American governments, including Brazil’s, were backed by the United States in carrying out “a vicious war against liberation theology,” Chomsky said. He also described U.S.-based hostility to Freirean ideals.

“The ‘crisis of democracy’ was that in the 1960s there was too much democracy,” Chomsky said. Groups in the United States seeking “liberation” — such as African-Americans, women, Latinos, and gays — “needed to be subdued,” he said.

A philosopher such as Freire worked in opposition to that attitude, as a driver of independent thought, Chomsky said.

“The sciences would be dead if there weren’t constant challenging” of received authority, he said. Also, learning doesn’t happen just with teachers: “A large part of education is peer interaction,” said Chomsky. “My son went to Harvard and said he learned more from fellow students than from classes.”

Della Chiesa finished by celebrating Freire’s ongoing relevance for educators and social justice advocates. “What Freire is describing is as old as mankind. What Freire tells us today is that we are spoon-fed” an ideology of capitalist consumerism. The author and his book offer an enduring alternative to conformity, della Chiesa said.