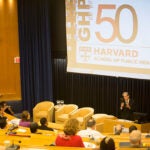 Giants behind, challenges ahead

A slowdown in the growth of U.S. health care costs could mean savings of as much as $770 billion on Medicare spending over the next decade, Harvard economists say.

In a paper published in the May issue of Health Affairs, David Cutler, the Otto Eckstein Professor of Applied Economics, and co-author Nikhil Sahni, a senior researcher in Harvard’s Economics Department, point to several factors, including a decline in the development of new drugs and technologies and increased efficiency in the health care system, to explain the recent slowdown.

If those trends continue over the next decade, they say, estimates of health care spending produced by the Congressional Budget Office (CBO) and the Office of the Actuary at the Centers for Medicare and Medicaid Services could be off by hundreds of billions.

“Historically, as far back as 1960, medical care has increased at about one and a half to 2 percent faster than the economy,” said Cutler, who served as a health care adviser to the 2008 Obama campaign. “In the last decade, however, medical care has not really grown as a share of the GDP. If you forecast that forward, it translates into a lot of money.”

Money that could have a profound effect not just on government spending, but on average workers as well, Cutler said.

If the growth in costs remains flat, Cutler said, companies could direct savings on health care back to workers in the form of increased salaries. Reduced health care costs could also help relieve financial strain on critical government programs.

“At the federal and state level, we’ve cut everything but health care,” Cutler said. “If we can hold the growth in health care spending down, it would reduce the pressure on government, and would allow us to avoid funding one program at the expense of others, or raising taxes.”

Although forecasts by the CBO and Medicare actuaries have taken the recent slowdown in health care spending into account, those estimates come with a serious flaw, the researchers said: an assumption that costs have slowed largely due to the 2007 recession.

By comparison, Cutler and Sahni’s study connects just over a third, about 37 percent, to the recession. The bulk of the decline, they say, is related to other factors, such as a decline in the development of new treatments.

“For whatever reason, the technology that’s available for treating people seems to be improving at a slower rate than in the past,” Cutler said. “In recent years, there have been a number of oncology drugs that have been touted as potential blockbusters, but most haven’t sold as well as expected. Other analysts have also noted that while research and development spending by pharmaceutical companies has increased dramatically, the number of new drug approvals has remained flat.”

With the passage of the Affordable Care Act, Cutler said, health care providers received new incentives to increase efficiency and reduce costly problems, such as readmitting patients soon after discharge and in-hospital infections.

“There are a variety of different programs where we’ve said if you’re efficient you’ll be rewarded, and so that’s what a lot of institutions are trying to do,” he said.

Steep out-of-pocket costs have also resulted in many people — even those who are insured — choosing to defer some treatments.

“A typical insurance policy now has a deductible of over $1,000 for an individual, and maybe $2,000 for a family, and most people don’t have that amount of cash in the bank,” Cutler said. “It’s a big hurdle. People look at their cost sharing, and they say, this is a lot of money, I’m not sure I can afford it, so they’re cutting back on discretionary imaging, they’re cutting back on elective surgeries, and on referrals to specialists that might not be covered.

Ultimately, Cutler said, the question of whether earlier estimates of health care costs are correct will depend on whether insurers, providers, and the public continue to work to keep costs under control.

“Don’t think of this as plate tectonics, where the earth’s crust is moving and we just need to figure out how fast it’s moving,” Cutler said. “We have a lot of control over this, through policies in the Affordable Care Act and Medicare and Medicaid. It’s not easy — no change is ever easy — but if we continue to do the right things, like stressing efficiency and helping people choose less expensive alternatives, then we can make sure this trend continues.”