Speaking up for science 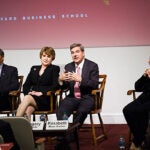 Toward a more competitive U.S.

In a visit to Harvard Thursday, Jane Lubchenco described four difficult years in Washington as administrator of the National Oceanic and Atmospheric Administration (NOAA). Nonetheless, she told a roomful of scientists and students, the challenge of D.C. is one to be embraced, to ensure science has a strong voice in policymaking.

“Operating in D.C. is so much harder than it needs to be,” Lubchenco said. “It’s exhausting, it’s frustrating, and at times depressing. That said, it is possible to get things done.”

Lubchenco recently left NOAA to return to the faculty at Oregon State University. She was among a handful of high-profile scientists brought into President Obama’s first administration as part of an effort to emphasize scientific integrity and raise the profile of scientific knowledge in policy decisions.

Her talk, at the Mallinckrodt Building’s Pfizer Auditorium, was sponsored by the Harvard University Center for the Environment (HUCE).

NOAA, part of the U.S. Commerce Department, runs the National Weather Service —including the National Hurricane Center — and the National Marine Fisheries Service, among other programs.

Lubchenco talked about the challenges of her time in government, including the disastrous BP oil spill in the Gulf of Mexico, the highly politicized atmosphere around climate science, and extreme weather events — searing drought, major floods, record snowstorms, more than 700 major tornadoes, and 70 Atlantic hurricanes, including Isaac, Irene, and Sandy — all against a backdrop of economic struggle and legislative gridlock.

Though she could have spent her four years in reaction mode, Lubchenco pushed ahead with several initiatives, including reducing political interference and stressing integrity in the science done at NOAA, restructuring a dysfunctional weather satellite program (which provides 90 percent of the data that goes into weather forecasts), creating a national oceans policy, and strengthening fishery management plans that have recovered 32 fisheries since 2000 and reduced the number of overfished stocks.

Among her failures was an effort to create a National Climate Service, a longer-term parallel to the National Weather Service. The change needed congressional approval and, with climate science becoming a third-rail issue, couldn’t get it.

“Some suggested that if we called it the ‘Longterm Weather Service’ we would have had a different outcome,” Lubchenco said.

Shifting from personal experience to the role of science in policy, Lubchenco called for more scientists to take up positions in government. This requires a change in how faculty training the next generation of scientists view a policy-focused career, she said. Currently, she said, academic scientists regard it as a failure if a student doesn’t wind up as an academic scientist. Instead, she said, students with an interest in policy should be encouraged, because their voices are essential.

But just showing up doesn’t mean success, she said. To be effective, scientists have to understand that the culture in Washington is not what they’re used to. Stories and anecdotes that relate facts to real people are often more persuasive than the bare facts themselves. Relationships, with both supporters and opponents of your positions, are crucial to accomplish anything. Equally vital is a skin thick enough to take the inevitable criticism.

Giving science a stronger voice in Washington will require having more scientists in key positions throughout the establishment: in government agencies, in the White House, and on Capitol Hill, Lubchenco said. It will also require greater engagement and a bigger effort by the academic community to communicate scientific findings.

Lubchenco was introduced by Professor of Biological Oceanography James McCarthy, who sat on her dissertation committee in the early 1970s. She received her doctorate from Harvard in 1975 and stayed on as an assistant professor before moving to Oregon State in 1977.