Refusing a ‘diminished self’ 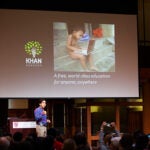 Four years ago this spring, Birtukan Midekssa was in solitary confinement in an Ethiopian prison. Her cell was 13 feet wide and 20 feet long and had no window. She was allowed only two visitors: her elderly mother and her 3-year-old daughter.

Midekssa left Ethiopia in 2011, after two imprisonments that consumed 41 months of her life.  She stayed first in Washington, D.C., and then at Stanford University. Today — grateful, happy, and energized — she has an office (with a window) at the W.E.B. Du Bois Institute, where she is a fellow this year. (A lawyer by training, Midekssa is also a Visiting Fellow with Harvard Law School’s Human Rights Program; starting in the fall she’ll pursue a one-year mid-career master’s degree in public administration through the Mason Program at Harvard Kennedy School.)

Most apt of all her local connections, perhaps, is her role as a Harvard Scholar at Risk. The program — based in New York, with dozens of affiliates at universities across the world — guarantees a year or more of refuge for scholars, writers, and scientists who in their native lands are under threat of death, imprisonment, or harassment.

“I was in prison because I spoke,” said Midekssa.

She was first sent to prison in 2005 — entering when her daughter Halley was 8 months old — and then again in 2008. Both times she was sentenced to life (the second time her original sentence was death). Both times Midekssa was pardoned because of pressure from international human rights groups. But she was ready to live her whole life in a cell. “I was being imprisoned for a right cause. What else could I do?” said Midekssa. “If you restrain your self-expression, you are left with what? Your diminished self.”

Midekssa had entered Ethiopia’s political arena in 2002 after serving nearly six years on that nation’s federal criminal bench. “Most of my years were full of challenge,” she said of being a judge — a struggle to “keep my independence and professional standards.” While she was on the bench, Ethiopian officials routinely tried to influence her decisions, she said. But she refused to go along, despite pressure that sometimes ratcheted up to threats of death. Her most notorious act of defiant honesty was to free a former defense minister, Siye Abraha, who’d been accused of corruption on dubious grounds, charges that had already cost him years in prison. (Abraha himself was in the Mason Program at Harvard Kennedy School, from 2011 to 2012.)

From girlhood, Midekssa had been enthralled by the idea that Ethiopia one day could be an open democracy, despite the fact that such a concept remained entirely theoretical during her early life. She was born in 1974, the last year of a dynasty of Ethiopian emperors that had started in the 13th century, and grew up in the capital city of Addis Ababa during a military dictatorship that lasted 17 years, ending when she was a senior in high school.

Before the next dictatorship took hold, Ethiopia enjoyed a brief Golden Age of open political discussion, said Midekssa. “Naturally, I aspired to see a country in which individual liberty is protected — in which nobody is killed for their views.”

Midekssa knew that such killing was possible. In the mid-1970s, university students and others had rallied behind the idea of a Marxist-Leninist utopia for Ethiopia — an opposition movement that led to the death and disappearance of thousands. Her uncle, a promising student headed for university studies, was one of them, and his disappearance hovered over young Midekssa’s household. Her uncle’s story was both a warning and an inspiration. Her mother often told Midekssa how unwise it was of her uncle to be in politics, she said — but “if I were his age I would have done the same thing.”

Her childhood contained another influence that could be called political: her neighborhood. “The community life was very fervent,” said Midekssa. “I grew up in a big family of small families.” Mutual support, collective trust, and affection were the norms, she said, and the egalitarianism of her childhood “was an inspiration for a fair and democratic society.”

Her mother was a housewife; her father a soldier. Both were illiterate, she said, but intensely interested in education, and proud of the acuity their daughter displayed in the classrooms of her youth.

By age 25, Midekssa was a federal judge specializing in criminal law — just one young face in a wave of young judges who replaced those associated with the deposed military regime. “I was full of enthusiasm from what I learned in law school,” she said, “but the experience in court was entirely different.” It was her struggle with maintaining the rule of law while on the bench, and her close-up view of official corruption, Midekssa said, that finally propelled her into politics.

During the 2005 national elections, her Coalition for Unity and Democracy party won every parliamentary seat in the capital, and scored other big wins over the ruling front of Prime Minister Meles Zenawi. But within days of the results she was in jail, along with other party members and a raft of independent journalists — all charged with treason. The arrest set her on a path to becoming Ethiopia’s most famous opposition figure. In 2010 she became the first woman in Ethiopian history to chair a political party, Unity for Democracy and Justice.

At Harvard, in her law school setting, Midekssa has studied how the judiciary in closed societies can remain independent. But at the Du Bois Institute her focus has been investigating how Ethiopia can achieve democracy. There is a strong appetite for democracy there already, she said, along with a tradition of Christian-Muslim religious tolerance that suggests to her that democracy would thrive.

But along with bedrock values there are also bedrock problems. For one, Ethiopia’s new constitution, in 1995, redrew the nation of 85 million along ethnic lines, fragmenting the overarching national identity into 80 ethnic identities within nine member states. That left Ethiopia “hollowed out,” she said, “deprived of its national symbols and emblems.”

Meanwhile, the federal government has ruled with a strong hand, sometimes by regional proxies. Midekssa called the arrangement “an unholy marriage between authoritarianism and ethno-nationalism.” Ethiopia’s aggressive central government and its weak regional states, she said, undermine “the virtues of federalism” and make the practice of democracy very unlikely. Leaders have also tightened their hold on the judiciary, the media, and the electoral process — a further “narrowing of the democratic sphere,” Midekssa said.

So what is to be done? The first step is to “recast the past,” she said, to reclaim symbols and a national narrative that would make Ethiopia one again. Also, re-imagine the future, said Midekssa, by promoting the shared social values that, for instance, her own childhood represented.

Then there are the practical steps, she said, including an official language, an independent supreme court, nationwide political parties to supplant those drawn along ethnic lines, and multicultural education to “help Ethiopians to imagine democratic Ethiopia, with all her mosaic.”