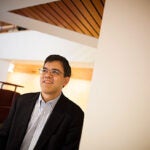 Talent on the sidelines

All but two of the Houses filled with military personnel, and faculty members left to take up posts supporting the war effort. That pushed undergraduate physics student Roy Glauber into a teaching role.

Glauber noticed something else, too: Harvard’s cyclotron — a kind of particle accelerator — was gone, dismantled by men wearing St. Louis Medical Depot uniforms and shipped west.

Glauber, who had entered Harvard in the fall of 1941 at the age of 16, would soon follow.

He was something of a physics prodigy. By the time he had been on campus two years, he had already taken many of the graduate physics courses the University had to offer. When he turned 18, he began to think about how he could help the war effort.  He knew scientists were in short supply, so he filled out the National Roster of Scientific Personnel.

Not long afterward, a man in a dark suit arrived. Though the two had never met, he recognized Glauber in a hallway and pulled him into a darkened faculty room nearby.

“He told me in a hushed voice that there was a project out West,” Glauber said. “He assured me they could make good use of me.”

Glauber, the Mallinckrodt Research Professor of Physics, delivered the David M. Lee Historical Lecture in Physics Tuesday, reflecting on his undergraduate years and his 1943 recruitment into the Manhattan Project in Los Alamos, N.M., which developed the world’s first nuclear bomb. Glauber was introduced by Physics Department Chair Melissa Franklin and the event included the awarding of the Goldhaber Prize, for outstanding research by doctoral students, to Norman Yao and Nicholas Schade.

Glauber, who won the Nobel Prize in physics in 2005 for work on the basic nature and behavior of light, spoke to a standing-room-only crowd in Harvard’s Science Center.

Glauber’s occasionally humorous recounting of a tense time in the nation’s history humanized the scientists who ushered in the nuclear era and gave a look at the cloak-and-dagger secrecy surrounding the project.

After shipping his belongings to Santa Fe, Glauber boarded a train west. He called a phone number in Chicago when he arrived and was met by someone with a ticket for the next leg of his trip. He headed southwest to Lamy, N.M., and was picked up at the train platform by two men. He listened, fascinated, to their conversation about problems in what were clearly advanced physics experiments during the ride into the hills to Los Alamos.

“I decided I had come into another world entirely,” Glauber said. “God only knows what they were doing up there.”

The atom had been split in 1938 by bombarding uranium atoms with neutrons. When scientists saw that the splitting generated even more neutrons, they realized the process could potentially trigger a chain reaction. If the reaction was fast enough, it could be used in a bomb.

Glauber had that chain reaction in mind when he arrived at Los Alamos. But he didn’t realize that the chain reaction had been achieved in secret in 1942, a year earlier. Now the effort was focused on creating a reaction fast and explosive enough to use in a bomb.

Glauber, who was assigned to calculate the critical mass of material needed to trigger a chain reaction, spoke very little of his own role at Los Alamos.

He did, however, address the rationale of those who knew they were working on a weapon. They knew that German scientists also understood the potential of a nuclear chain reaction and were probably working on the same thing. They had watched Nazi Germany’s bombing of England during the Battle of Britain and believed that if Germany got a nuclear bomb, it would use it.

The government had assembled a who’s who of scientists at Los Alamos.  Glauber spoke of J. Robert Oppenheimer, who directed the scientific effort, Niels Bohr, Enrico Fermi, Richard Feynman, and others.

Feynman had a well-developed sense of humor and employed his analytical skills in teasing the security personnel — he communicated with his ill wife in Albuquerque in code — and in cracking safes.

“He even taught me to pick them,” Glauber said. “He opened Oppenheimer’s safe once and he would just leave little messages.”

The scientific team used two main approaches to creating a bomb, one a “gun” design that would fire one mass of uranium into another, creating a critical mass and triggering the explosive reaction. The second was a spherical “implosion” design that was technically more challenging and that would be tested in the world’s first nuclear explosion, the Trinity Test in July 1945 at the Alamogordo Bombing and Gunnery Range in the New Mexico desert.

“I watched from a mountaintop 100 miles away and saw the original blast,” Glauber said. “I didn’t hear it until six or seven minutes later.”

A few weeks later, what Glauber referred to as the “horrible story” of the bombings of Hiroshima and Nagasaki occurred. They brought the war, and the project, to a close. After a thank-you ceremony from the military, Glauber returned to Harvard to finish his studies, receiving a bachelor’s degree in 1946 and a doctorate in 1949.