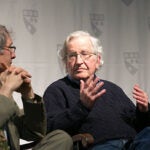 Alumnus works in finance, helps Harvard to thrive in Shanghai

SHANGHAI — “This experience wasn’t about going to class,” said Shaw Chen of the year he spent at Peking University.

Chen, who graduated from Harvard in 2000, said his stint in Beijing as a Harvard-Yenching Fellow was formative for him, but not necessarily because of his classroom learning. Arriving at the campus in the fall of 1998 after a summer stint at the U.S. Embassy in Beijing, he took undergraduate classes with Chinese students and immersed himself in student life.

Both on and off the campus, on train and bus trips through the country, he saw a nation that, though ancient, was stretching new economic muscles.

“You could … see a real energy in China. You had a sense China was heading somewhere,” Chen said.

China still is going places, only perhaps with even more energy than in 1998. And Chen, who is treasurer of the Harvard Club of Shanghai, has shifted from learning about how the nation was growing to helping it along. Chen today runs an investment firm in Shanghai and has seen tremendous changes in the markets over the past 15 years.

When he began, Chen mainly dealt with Western companies seeking a foothold in the rapidly growing economy. Today, he still sees a lot of interest from foreign companies, but he also sees increasing activity by Chinese companies and individuals looking to invest outside China’s borders.

“I’d say this is part of the larger story of China’s growing economic and geopolitical clout,” Chen said. “It’s a fascinating time to be a China watcher.”

Chen’s family moved a lot when he was young. His parents immigrated to the United States from Taiwan, and his father’s career path prompted the family to move regularly as Chen grew up. He lived in Pennsylvania, Michigan, Ohio, Indiana, New York, Oregon, Singapore, and Los Angeles.

As he got older, Chen had his own wanderlust, spending the summer before coming to Harvard in Spain, the fellowship year in Beijing, and a summer traveling in Tibet with Eliot House roommate Daniel Forger ’99, before starting an internship in Hong Kong. He settled in Manhattan for a post-graduation bounce year that ended with him moving to Hong Kong the same week as the 9/11 terrorist attacks.

When Chen arrived at Harvard in 1995, he thought his future lay in medicine, not international finance. He soon realized, however, that the heavy scientific course load, weighted with required laboratory time, was preventing him from exploring other interests, including his heritage.

Chen said a chance encounter on the day he was moving in at Harvard Yard may have been a sign of things to come.

“I was wandering around Harvard Square when a Tibetan family in traditional garb asked me for directions to the Charles Hotel,” Chen said. “I walked them to the hotel and followed them to a small conference room for what turned out to be a private audience with the Dalai Lama for the local Tibetan community. To say the least, it was an amazing welcome to Cambridge.”

When he did take classes on China, he realized that he preferred them to biochemistry and switched to East Asian studies.

“Harvard’s core curriculum offered a great selection of China-related electives. I started realizing I was really interested in this stuff,” Chen said.

When Chen talks about his Harvard experience, the things that happened outside class were just as important as those within. He remembers working late nights at The Harvard Crimson, where he was an editor and design chair. He still sees bylines of fellow Crimson editors who went into journalism and said many remain his close friends. He remembers having to adjust to the general brilliance of his classmates and to the sense that he was “a small fish in a big pond.” He also recalls the difficulty of his first winter in Cambridge, which featured plenty of snow and a 100-year storm.

“Coming from Southern California, I was not at all prepared for that winter. It was a shock to me,” Chen said. “The experience at Harvard can be challenging … You need to be very proactive to take advantage of what Harvard offers.”

The campus experience got more familiar when his brother Jay arrived as a freshman the following year.

“It was great having my brother on campus,” Chen said. “Jay was [in the Quad] his sophomore year, which made for a good excuse to trek up to Cabot House for weekend brunch and waffles.”

Chen’s time at Peking University coincided with the Kosovo War, during which NATO planes inadvertently bombed the Chinese Embassy in Belgrade. The incident set off violent protests — in which many of Chen’s Chinese classmates took part — across China. There was a backlash against Americans that caused many foreign students to head for the airport. Chen stayed behind, even though he was sometimes harassed in Internet cafes and in class, where he was called out about the bombing by instructors.

“It got really hostile for foreign students on campus,” Chen said. “A lot of people just left, but I stuck around.”

After his post-graduation move to Hong Kong with Morgan Stanley, Chen found his way back to China when he joined Heineken, which was building local operations in Shanghai. Chen worked on the acquisitions of regional Chinese breweries and eventually joined a boutique private equity firm in Shanghai that handled Chinese investments for university endowments.

Chen struck out on his own five years ago, founding an investment firm that today has offices in Shanghai and Chengdu, China.

Kate McFarlin, president of the Harvard Club of Shanghai, described Chen as thoughtful and detail-oriented, with both wit and a strong commitment to the University. The two met at a Harvard alumni mixer after McFarlin moved to Shanghai, and both were elected officers to the club in 2005.

“Shaw is someone you want on your side of the table,” McFarlin said. “I enjoy spending time with Shaw because he is incredibly intelligent and thoughtful, but also because he has a great, dry sense of humor and is quick to smile and crack a joke.”

Chen and McFarlin will lead the organization for two more years. Even when he’s no longer club treasurer, Chen likely will stay in touch with his Harvard colleagues. He has found over the years that the Harvard community in Shanghai provides a strong foundation for friendship.

“A lot of my closest friends in Shanghai are Harvard graduates, and not because I knew them then or sought them out. We’re all quite different, but have some sort of understanding, a shared sense of purpose,” Chen said. “The Harvard experience is not just the classroom, it’s the entire experience, holistically Crimson. Having this community here is pretty important.”