Giving back because of what Harvard gave them 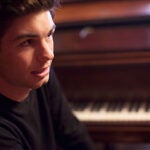 He strikes a key balance

Alumni celebrate why Harvard connections are so important

From lifelong relationships to memories of the Houses, there are innumerable reasons alumni choose to support Harvard. Every year, more than 30,000 alumni give back in celebration of reunions, as volunteers, or through annual gifts, and they aren’t shy about sharing why.

At the recent Volunteer Voices event in New York, nearly 100 honored alumni celebrated why Harvard connections are so important to them. Their sentiment ranged from the humorous to the heartfelt. “I’ll always love Harvard because it gave so much to me,” read a handwritten sign held by Ken Swan ’56.

Many focused on the people they met while students. Former Weld roommates Christina Shelby ’04 and Georgia Shutzer ’04 posed together and held matching signs proclaiming, “It’s where I met my best friends.” Harvard College Fund Co-Chair Nicholas Sakellariadis ’73 and his wife, Julie ’78, held signs pointing to each other: “It’s where I met her (him).”

Others emphasized their gratitude for the opportunities Harvard gave them. Erika Hamden ’06 proudly held a sign that said, “It turned me into an astrophysicist!” Deborah Elitzur ’96 wrote, “Harvard has opened up new worlds for me, offered me new perspectives, and is allowing me to fulfill my dreams.”

Some pointed to more intangible experiences in the Houses. Eve Rosenbaum ’12 and Shannon Cleary ’12 were wistful for Marshmallow Mateys and the times when “HUDS made my meals.” For Kevin Chan ’07, it was about the place he called home: “Lowell House is the best House.”

This affection and loyalty was evident in signs like that of Sadie Sanchez ’98, who wrote that she gives to Harvard because “I want to pay it forward.”

This attitude is common among reunion volunteers, who this year have taken on more than 5,000 peer solicitations and are helping to close in on an ambitious goal of raising $50 million in immediate-use funds by June 30. These efforts give Harvard the resources to fuel remarkable innovation, maintain mission-critical financial aid, and inspire new initiatives in teaching and learning.

Jamie Harmon ’93 was motivated to volunteer as co-chair of his 20th reunion because of the impact that Harvard had on him and his peers. “I learned so much from my roommates and classmates. It was exciting to be around such talented, smart people,” he said.

“Harvard takes bright young minds and turbocharges them,” he said. “The College raises students’ sights and shows them that they can do anything.”

Jane Hatch ’88, who serves as participation co-chair of her 25th reunion, volunteers because she feels a personal responsibility to make sure Harvard remains affordable to all. “Without financial aid,” she said, “there was no way I could have come to Harvard.”

For both Harmon and Hatch, returning to Harvard is one of their favorite ways to connect with the College. Hatch is grateful for the circle of women with whom she remains very close. “I’ve also made new friends with classmates that I didn’t know then,” she said.

When Harmon comes to Cambridge, he never fails to visit Harvard Yard. “It’s one of the places where I feel most comfortable,” he said.

To view the “Giving Back” stories slide show.