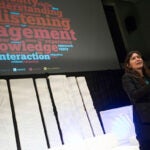 Khan wants to bring world-class teaching to ‘anyone anywhere’

When he was filling out the forms to establish his new nonprofit in 2008, Salman Khan paused at the mission statement section.

The Massachusetts Institute of Technology grad, a math and computer whiz with an M.B.A. from Harvard Business School, thought for a moment, and then jotted down a powerful response: “A free world-class education for anyone anywhere.”

With the academy, Khan told a crowded Radcliffe Gymnasium on Wednesday during an Askwith Forum sponsored by the Harvard Graduate School of Education, he hopes to advance a vision of education as “a fundamental human right.”

He is well on his way. Khan Academy offers, at no cost, entertaining and informative videos, online lessons, and interactive software tools its founder hopes will help transform teaching and learning.

With Khan’s digital tools, teachers can closely track student performance through a color-coded spreadsheet, identifying learners who are excelling and those who need help. Khan said his videos and tutorials also enable each learner to master introductory concepts at his or her own pace before moving on to harder topics.

“In a traditional academic model we group kids together usually by age … and then we move them all together at a set pace.” Khan described the familiar process: a series of lectures and homework assignments, and then an exam to test students’ knowledge and understanding.

Not all students do well on the test. Nonetheless, the entire class moves to a harder subject.

“Imagine if we applied that process to other parts of our life, say building a house,” he said. If a contractor with limited time did the best job he or she could on a foundation and an inspector rated it 85 percent complete, he went on, no one would say: “Great, let’s build a first floor!”

If that home topples, the first person held responsible is the contractor, much like the teacher in a classroom with struggling students. And while some teachers (and contractors) deserve the blame, more often it’s the process that’s at fault, said Khan. “You are artificially constraining how long someone had to work on something. And then when you inspected it and identified weaknesses, you just ignored them and moved on to the next thing, often with something that is going to build on the weaknesses that you just identified.”

In Khan’s model, struggling students receive the help they need, sometimes from peers who have mastered the material.

Early results are promising. Khan said his system is being used in a number of schools and charter networks in California. The data show students considered below average often “go on to become the best or second-best student in the class,” he said.

In addition to the classroom benefits, the academy is also an effective “research tool in and of itself,” Khan said.

With roughly 3 million exercises done on the site every day, Khan and his team of 40 researchers experiment with questions, adding comments, explanations, and sometimes even just an inspiring quote about the importance of flexing one’s brain, in an effort to track what encourages learning.

Khan said his work also has implications for the developing world. While the nonprofit has traditionally more focused on English-speaking countries, it now has 7,000 videos in other languages, including Mandarin, Farsi, Bengali, and Portuguese, with plans to develop many more.

During a question-and-answer session, one listener asked Khan for his thoughts on the growing interest in online education, including Harvard’s involvement with edX, a partnership with MIT that promotes Web-based, interactive study and learning.

“EdX we are very close to. Anant Agarwal [the edX president] is actually one of my former professors. So we want to coordinate with them as much as possible,” he said.

The onetime financier walked the crowd through his organization’s humble beginnings. In 2004 Khan was an analyst at a Boston hedge fund when he began helping his young niece with math via Internet and phone.

Word quickly spread that he was offering free tutoring. Soon he was working with a group of about 15 cousins and friends of the family. Khan started recording math tutorials in a closet in his home and posting them to YouTube.

Then his students told him they preferred the YouTube Khan to the real thing.

A little surprised, Khan realized their comments made perfect sense. “The first time you are learning a concept the last thing you need is someone standing right there saying ‘It’s easy, right?’”

“One woman wrote, ‘My entire family prays for your entire family every night.’ You have to put things into perspective. I was an analyst at a hedge fund. There was not a lot of prayer going on. Well, at least in that way,” joked Khan.

Khan quit his job in 2009 and devoted his time to fundraising for the new project. His finances and prospects looked dire several months in, until an enthusiastic donor gave him $10,000. They met, he described his vision, and 10 minutes after they parted she wired him another $100,000.

Other good days followed, including a meeting with Microsoft’s Bill Gates, who became a major backer, as did Google. Today Khan’s nonprofit reaches millions of students a day and is used in 30,000 classrooms around the world.

The morning assembly was also something of a recruiting session. Following the talk, Khan, who’d encouraged those interested in careers at his academy to stick around, drew a crowd.