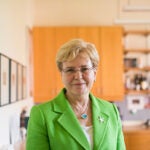 Speaking up for science

SHANGHAI — Kate McFarlin got off the plane in Beijing not knowing a soul. It was 2003, the summer of SARS, and the recent Harvard graduate was there to spend a year at the Beijing Film Academy.

McFarlin, armed with little more than what she described as “mediocre classroom Chinese” and the email address of a contact gleaned from her boss at a summer job, survived the yearlong fellowship. But she recalls her initial experience as an example of why it’s important for Harvard to have strong alumni networks in China and elsewhere in the world.

“I remember how lost and confused I was when I arrived off the plane,” McFarlin said. “Just having a single person’s email so you can say, ‘Where should I go? What should I do?’ was invaluable.”

McFarlin arrived with her one-year fellowship and a five-year plan to improve her Chinese, get experience, and make contacts. Ten years later, she remains in China, comfortably fluent in Mandarin, and, as the president of the Harvard Club of Shanghai, is working to strengthen the alumni community.

She has spent time as an entrepreneur and as a teacher, and is currently a communications and recruiting specialist for a fast-growing global investment firm. Through the changes, two things have held steady for McFarlin: her enthusiasm for both China and Harvard.

“I’m a huge Harvard enthusiast,” McFarlin said. “Harvard opened the world to me. It said, ‘You can do whatever you want.’ I don’t think there’s any way in the world I’d be sitting in Shanghai … right now if I didn’t go to Harvard.”

Those who know McFarlin describe her as outgoing, friendly, and “charmingly relentless,” a driving force behind making the Harvard Club of Shanghai relevant to the University community there.

“She embodies both Harvard’s growing engagement with the world and the rapid emergence of Shanghai as a truly global city,” said William C. Kirby, the T.M. Chang Professor of China Studies, Spangler Family Professor of Business Administration, and head of both the Fairbank Center for Chinese Studies and the Harvard China Fund. “She is so bright, organized, and charmingly relentless that our Harvard Club of Shanghai has thrived under her leadership.”

Shaw Chen, the club’s treasurer, got to know McFarlin through a mutual friend shortly after McFarlin arrived. He praised her efforts to raise the club’s profile and, on a personal note, said her annual Thanksgiving dinners are not to be missed.

“It’s an amazing spread of traditional home-cooked favorites,” Chen said. “It’s an event her friends look forward to every November, particularly for the homesick American expats among us, myself included.”

McFarlin entered Harvard in the fall of 1999 thinking that she would become a doctor. Freshman chemistry proved a problem, however, one that McFarlin admits could be at least partly traced to her “freshman social life.” Instead of goading her into further struggles, however, McFarlin’s advisers asked her to look at her whole Harvard experience, including the classes she was enjoying most.

“Their advice was: Why bother with Chem 10 when that’s kind of a Gen Ed course taken by every pre-med in the world? What’s the unique thing at Harvard you’re studying?”

She doesn’t recall exactly why she enrolled in beginning Chinese as a freshman or why she stayed with it, given that most of the other “beginners” in the class already had ample experience. But she found herself enjoying the language, and learning to write characters appealed to her artistic side.

“This Chinese class was really fun. I had never had a Chinese class in my life. I’m sure the teachers thought I was totally insane to even try because everyone else had parents who spoke Chinese, but [felt], ‘Oh, I don’t know how to write characters, so I should be in beginning Chinese,’” McFarlin said. “They walk into class and are chatting with the teacher the first day, when I had never even heard ni hao [hello].”

But “it was such a fun experience to be in this language class that I took my adviser’s advice, picked up a couple of other Asian history classes, and then declared East Asian studies as my concentration my sophomore year.”

McFarlin was prepared to go to China after graduation, but when SARS (severe acute respiratory syndrome), broke out in Hong Kong and began spreading, the global panic led to the cancellation of Chinese job postings, including, she thought, the fellowship she had applied for at the Beijing Film Academy. Instead of China, McFarlin headed home to Tampa, Fla.

“I went home to Florida and watched my parents’ chagrin that I had graduated from Harvard and now was home,” McFarlin said. “That’s before it was trendy.”

But SARS or not, a few weeks later, a letter from the Beijing Film Academy arrived, saying that she had been accepted and that classes started in two weeks.

“I just packed a couple of bags and came. That was it. I never left,” McFarlin said.

McFarlin eventually moved from Beijing to Shanghai for a job with an investment firm. When she left that job, she spent the next couple of years teaching high school, tutoring, and freelance writing.

A recurrent problem for McFarlin was finding clothes that fit. At 5 foot 10, she is taller than most Chinese women. She began making her own, and her designs were such a hit with her friends that they urged her to start a business. She took their advice and Suits U was born.

Working with Kevin Ching, a 2006 Harvard graduate and friend from Hasty Pudding, the two marketed custom-made suits and shirts to college students at Harvard, Yale, and other campuses.  McFarlin handled the China end of the operation, locating material and working with tailors. The business did well for a few years before Ching moved to Beijing, leaving McFarlin without a U.S. contact.

For a while, she contemplated moving back to the United States to take on that role herself, but she had begun dating the person she’d eventually marry, Nathaniel Barney. She closed Suits U and joined her current firm, GHF Group, for which she handles human resources, recruiting, and global communications.

“I’ve had more opportunities here in China, in my 20s, than I ever would have had anywhere else,” McFarlin said. “You have amazing access to people. … I’ve had amazing job offers and could hop across any industry I wanted, and I did.”

McFarlin got involved with the Harvard Club as a way to meet people. She started out by organizing events and took over as president seven years ago, succeeding David Orenstein.

McFarlin said the opening of a permanent office, the Harvard Center Shanghai, in 2010 has made a difference to the club, offering both a physical focus for the alumni community and a place in which to hold events. McFarlin has been active in College recruiting efforts, spreading the word to talented Chinese high schoolers that Harvard is an option.

McFarlin has another year to go in her term as club president, because she and other current officers have agreed to stay on during a transition period in which the club will adopt a more formal governance structure, ratified at the first general meeting in November.

“It’s really been fabulous,” McFarlin said. “The University’s done great things for me to further my education and my career. I’ve received travel grants and scholarships, so I’ll do anything I can as a volunteer to promote the Harvard spirit in China.”