Sense where none seems possible 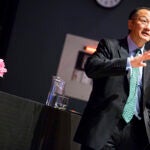 Panel probes religion’s place in cruelties such as marathon bombings

Many audience members arrived at the Harvard Divinity School (HDS) on Tuesday evening with an aching question: Why? Why would two young men attack innocent people in a country that took them in, educated them, and supported them?

The answer, explored during an hour-and-a-half discussion, appears complex and complicated and may never be fully known or understood.

But in the aftermath of the Boston Marathon bombings on April 15, five panelists gathered to discuss “Religion and Terror.” Along with moderator and radio host Christopher Lydon, they grappled with the ways that religion can be used to justify terrorist acts, and examined how traditions of faith also can help people to heal.

Jocelyne Cesari, a Harvard Divinity School lecturer on Islamic studies who also directs the Islam in the West Program at the Center for Middle Eastern Studies, said that, despite some misleading press reports, the Islamic community is not responsible for radicalism. Instead, she said, “It’s a good way to prevent” it.

“The more you are part of a congregation, the more you are interested in your social and political environments.” (One of the attackers, Tamerlan Tsarnaev, had attended services at the Islamic Society of Boston but was not a “fully integrated member of the mosque,” she added, and had been kicked out of a service earlier in the year for arguing with an imam about the importance of civil rights activist Martin Luther King Jr.)

“Mosques in the United States,” she said, “are intolerant of radicalization.”

Cesari said “dis-embeddedness,” a sense of alienation from one’s own community and family, and a feeling that nonbelievers are hostile to your existence, can help to lead people to radical jihad. So can the Internet, since online activists and preachers offer the disaffected an ideological view of Islam that suggests dangerous influences from the West, and support the notion that the only true community is the “global jihad community.”

“It’s very important to understand that this is not about religion as a spiritual quest,” said Cesari, saying that those who have not been socialized in an Islamic teaching or lifestyle, as is often the case with converts in the West, or people who have had strictly secular upbringings, such as the accused bombers, “tend to be much more vulnerable to the radical speech online because they have no point of reference.”

“In the West, we need more Islam in terms of religion,” said Cesari, “and much, much less the ideological positions on Islam.”

HDS Dean David Hempton spent his college years surrounded by the sectarian violence in Northern Ireland’s capital, Belfast, where he said religion was only one contributing factor to the fighting. The multilayered conflict also involved competing nationalities, cultural traditions, access to economic opportunities, policing, and security forces. Watching the conflict unfold, Hempton said, he began to understand that violence radicalizes people, that there is danger in stereotyping, and that it is important to check one’s own moral choices and views constantly to try “to see events from the other side.”

The tumultuous Civil Rights Movement showed King “the absolute necessity of nonviolence as a way of dealing with violence,” Cox said.

The same message should hold true today. The only logical response to violence, said Cox, is “an active, nonviolent, confrontational approach.”

As someone who lived through the Bosnian war, Zilka Spahic Siljak, a visiting lecturer on women’s and Islamic studies, said she still finds it impossible to understand how such violence could have erupted in her homeland almost overnight between people who had been peaceful neighbors.

The war was driven by politics and economics, but eventually religion became a way of pitting people against one another, she said. Yet in the war’s aftermath, religion became key to reconciliation. Interfaith dialogue with those who were ready to change “was very important for us in the Balkans.”

Rabbi Sally Finestone offered advice to people in the ministry who will face difficult questions like “How can a good and just God let such terrible things happen?” Finestone said that hope lies in the many examples of kindness and caring that emerged in the seconds after the bombings as bystanders rushed to help the injured.

“Perhaps God is to be found in the response that happened, in the hands that reached for other hands, as opposed to the tragedy itself.”

Finestone closed her comments with a passage from Leviticus, the third book of the Hebrew Bible, which commands those who find their enemy’s lost animal to make “every attempt to bring it back.” The rabbinic explanation of the passage, said Finestone, states that such an act leads to dialogue. “Perhaps it’s in that dialogue that God is with us.”

Similarly, Hempton said he took comfort in the outpouring of compassion expressed in the notes penned on the nearby “remembrance walls,” the whiteboards that were set up in the Science Center Plaza on April 24 for mourners to comment, and the sense of “community togetherness against the outrage that had been committed.”

“Comments speaking about compassion and courage and community affirmation, and sympathy and empathy. It was just a beautiful set of messages.”