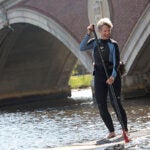 Suzie Verdin loved to dance. But growing up in a community where art and creativity exist in tension, she often struggled to justify her passion.

The child of Mexican immigrants, Verdin was born and raised in Laredo, Texas, a border city at the intersection of Mexican and American identities. She gravitated toward dance as a girl, performing with the precision dance and drill teams popular there. But there was always an underlying friction.

“Sometimes, there is a false dichotomy between what a community values in creativity and what a community considers the arts,” Verdin said. “Unfortunately, in immigrant communities, I believe that division is really stark. And allowing yourself to value the arts is impeded because you don’t see the connection between this everyday creativity and maybe innovative ways of thinking.

“It took me a really long time to be able to say without feeling like a fraud or a phony that I am an artful person,” she said, “and to say I really value the arts and the performing arts.”

Armed with her new degree from the Harvard Graduate School of Education’s (HGSE) Arts in Education Program, Verdin plans to change that paradigm. She hopes to work for a nonprofit in Texas, using dance to engage immigrant communities with the arts.

Verdin said she arrived at Harvard College in 1995 as an idealistic teenager. Eager to continue to embrace movement, she quickly formed the Harvard Crimson Dance Team, a competitive group that has grown from just a handful to 16 members and performs at Harvard’s home basketball games.

A pragmatist, Verdin also realized she had to pay for school. Her parents could afford the cost of the plane ticket to Boston, she recalled, but little else. A few years too early to take advantage of Harvard’s enhanced financial aid program, she turned to the Reserve Officers’ Training Corps. That led to an assignment after college with the U.S. Air Force airborne early warning and control system, in a radar plane that helped to control military airspace. Her work included missions over Afghanistan during Operation Enduring Freedom.

In 2007, Verdin left the military and worked for three years with a private contractor hired by the Colombian government to scan the country’s skies, and later its coastlines, for planes and boats transporting narcotics or drug money.

But she always hoped to reconnect with her creative side. “I never stopped being engaged with a dance community.” She took and taught dance classes, worked and performed with independent choreographers and a local flamenco group, married and had her first child in 2011. (Her second child, Ava, was born in January, between HGSE semesters.) Verdin also worked closely with her husband, a retired Air Force pilot who helps veterans cope with post-traumatic stress disorder through yoga.

“It all reminded me that our lives are so much more than just things we read or ideas we discuss from the neck up. It’s also about what we feel, what we touch, how we move in the space. It’s the most important thing to me educationally, and why I wanted to come back to this quality community at Harvard.”

In Dallas, she hopes to develop a curriculum around “movement literacy,” an approach that is not tied to a specific technique or body type, and one that “anyone can access.”

Verdin got people moving during her recent stint at Harvard. She choreographed a dance show starring her fellow HGSE masters’ students that explored the “experience of the visuo-spatial learner.”

The HGSE experience, Verdin said, reminded her of the sensation she had as a freshman starting up the dance team. “It gave me the feeling that Harvard is the kind of place where you can do anything.”