A vision of education for Kenya 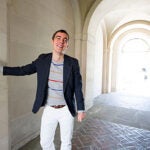 When Anne Bholene Akinyi Odera-Awuor, Ed.M.’13, boarded a plane in Nairobi last September, she left behind a busy life as an English and education lecturer in her native Kenya. Ahead was a year’s study at the Harvard Graduate School of Education, “a really high platform, a place of respect,” she said —  all the more so because it would help her grand plan to change how schools operate in Kenya.

The Texas-size African nation has an educational system of rote learning, large classes, ironclad bureaucracy, and no provision for slow learners. (Awuor’s 12-year-old son is in that camp. “It was a bewildering situation,” she said. “I didn’t know what to do about it for a long time.”) Her dream is Kivulini, an education policy center based on a tutoring and support group that she founded last year. In Kiswahili, the word means “in the shade,” she said, as in “a metaphoric shade” cast by the mediocre elementary education in parts of Kenya. Explaining the scale of the task facing her, Awuor said, “It will be like moving a cemetery.”

Last fall, as soon as Awuor’s plane touched down in Boston, culture shock rolled in. For one thing, she still looked at the world in terms of the Kenyan shilling; you can get 85 of them for an American dollar. Awuor went to a Cambridge restaurant, ordered a sandwich, and got the bill: $12. “I am having a room for lunch,” she thought. In parts of Nairobi, Awuor explained, room rent for a month costs the same as an American sandwich.

Then cold weather set in. She priced a winter coat: $200. For that kind of money, she thought, “I could just go buy land,” and right there decided that her sweatshirt would be enough. But then came winter itself. “My God, I shed tears,” in the cold, she said.

There were other weather shocks, like learning to walk on ice, and other culture shocks, like learning how to register for classes online. (She asked: “How are you supposed to choose from this world, this encyclopedia, of courses?”) In addition, Awuor had been trained in a discursive style of expression in Kenya’s British-inspired schools, so she had to contend with the hurdle of American writing. “You go straight into what you mean to say,” she said, still puzzled. “Where’s the romance?”

But every bump along the way has been worth it, said Awuor. She arrived shy and is leaving with confidence and a new knack for collaborative learning. She arrived a Kenyan and is leaving a citizen of the world, armed with examples of teacher training and classroom strategies that work in other countries. (Her favorite: Finland.)

Born prematurely in1972, Awuor struggled so much in her first month of life that she was not even named. The doctors told her father, “What for?” But as soon as the tide turned, “that’s the moment I latched on to my dad’s heart,” she said. He then named her “Akinyi,” a name that means “dawn,” a symbol of new beginnings.

“I have accumulated some velocity,” said Awuor of her Harvard experience, which, thanks to a WorldTeach internship, she will extend at least into the fall. “It has made me feel irreverent about my pursuit of excellence. Before, I didn’t want to be so forward, so loud about what I believe. I’m not like that anymore. I’m like: ‘This is what has to be done.’ ”